How to Prevent Man In the Middle Attack?

In a web application, there are two actors usually: the client and the server. The third entity that remains unnoticed most of the time is the communication channel. This channel can be a wired connection or a wireless one. There can be one or more servers in the way forwarding your request to the destination server in the most efficient way possible. These are known as Proxy servers.

When there is an unwanted proxy in the network intercepting and modifying the requests/responses, this proxy is called a Man in the middle. The network then is said to be under a man-in-the-middle attack. The interesting point lies in the fact that this rogue proxy is often misunderstood as a legitimate endpoint in a communication by the other endpoint. (It works as a server for the client and as a client for the server).

For example, suppose you are connected to a Wi-Fi network and doing a transaction with your bank. An attacker is also connected to the same Wi-Fi. The attacker does the following: 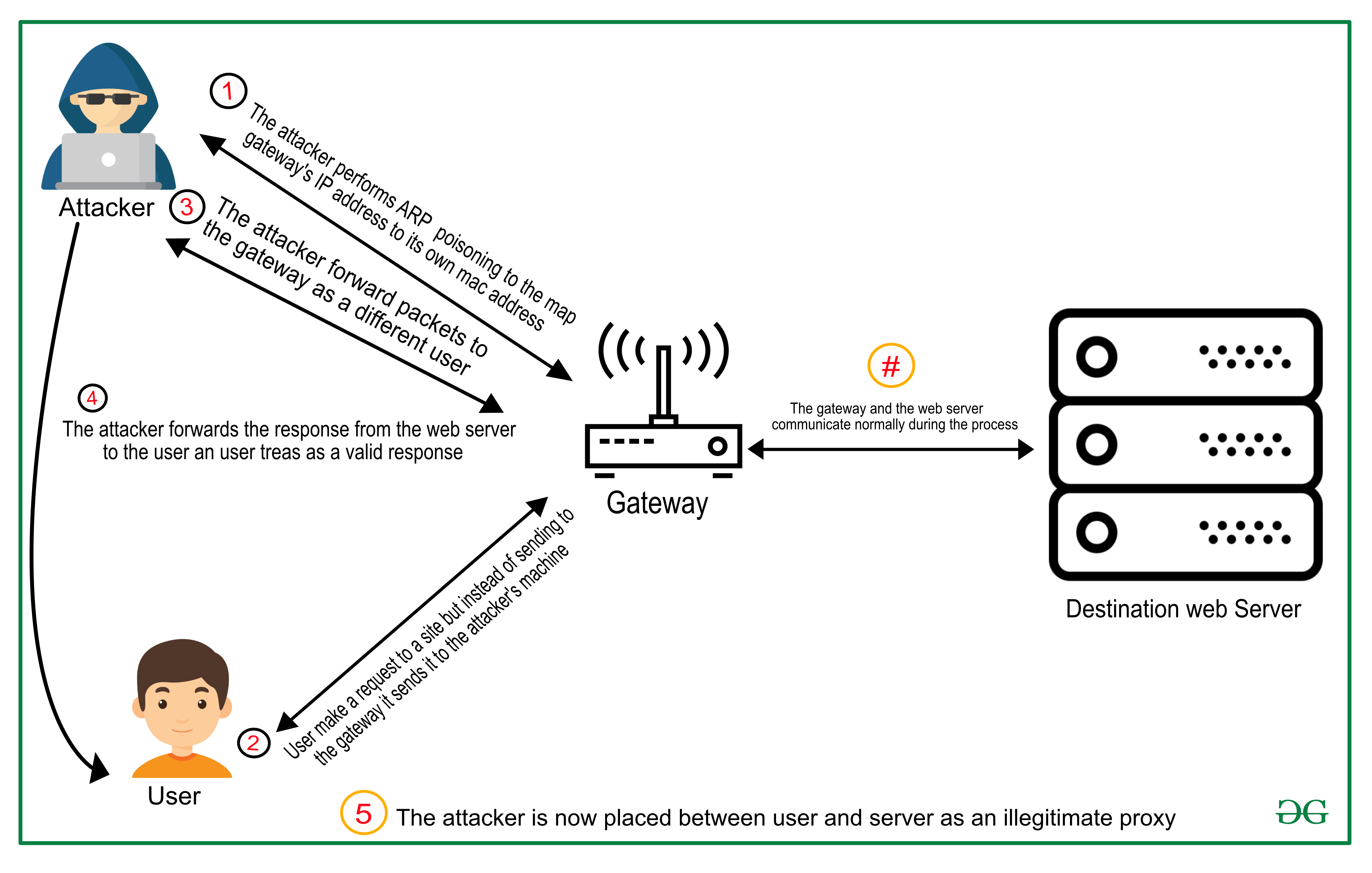 This way the attacker is suitably situated between you and your bank’s server. Every bit of sensitive data that you send to your server including your login password, is visible to the attacker. ARP cache poisoning is one of the ways to perform a MITM attack; other ways are –

The use of SSL can prevent these attacks from being successful. Since the data is encrypted and only legitimate endpoints have the key to decrypt it, the attacker can do very little from the data even if he gets access to it.
(SSL is only useful if it’s set up properly, there are ways to circumvent this protection mechanism too, but they are very hard to be carried out). Still, an attacker can do a lot of damage if the web application with which the user has been interacting does not utilize the use of something called the nonce. The attacker can capture the encrypted request, for the entire session and then carefully resend the requests used for logging in. This way the attacker will get access to your account without knowing your password. Using nonce prevents such “replay attacks”. A nonce is a unique number that is sent by the server to the client prior to login. It is submitted with the username and password and is invalidated after a single use.

Key concepts of Man in the Middle Attack

Man in the Middle Attack: It is a type of cyber-attack where the attacker performs its functions by staying between the two parties. The type of function it can do is to alter the communication between the two parties and make both of the parties feel that they are communicating in a secured network.
An example of a MITM attack is:- Listening to others and making them believe they are communicating with each other, without knowing that their entire conversation is currently controlled by someone who is performing the man in the middle attack.

Remote Access Trojans: The Remote Access Trojans get themselves downloaded on a device if the victims click on any attachment in an email or from a game. It enables the attacker to get control over the device and monitor the activities or gain remote access. This RAT makes itself undetected on the device, and they remain in the device for a longer period of time for getting data that may be confidential.

It is a common attack?

This Man in the Middle Attack is not common for a longer period of time. This type of attack is usually done when the attacker has a specific target. This attack is not a common attack like phishing or any kind of malware or ransomware.

Users should be aware of

There are some things that can be done to avoid becoming a victim of the MITM and related attacks. One should:

Previous
Python - Fastest Growing Programming Language
Next
Some Useful Tips for Choosing Best VPN and Recommended VPN Services
Related Articles
1. Cybercrime Causes And Measures To Prevent It
2. How To Prevent E-Fraud
3. How to Prevent Small Businesses From Cyber Attacks?
4. Ransomware Explained: How It Works And How To Prevent It
5. How To Prevent Windows From Connecting To Unsecured Wireless Networks?
6. Difference between Threat and Attack
7. What is Zed Attack Proxy?
8. What is a Dictionary Attack?
9. US Maritime Attack
10. Zero-day Exploit (Cyber Security Attack)
Article Contributed By :