How to Create a Shell Script in linux

Shell is an interface of the operating system. It accepts commands from users and interprets them to the operating system. If you want to run a bunch of commands together, you can do so by creating a shell script. Shell scripts are very useful if you need to do a task routinely, like taking a backup. You can list those commands and execute them all with just a single script. Let’s see how you can create a shell script and run it on Linux.

Login to your Linux machine and open the terminal, navigate to the folder where you want to store the shell script. Shell scripts end with the extension “.sh”. Let’s create our first shell script. Type in

Now, this script file is not executable by default, we have to give the executable permission to this file. Type in

Add the following commands to test this shell script

Save the changes, and run the shell script by typing in

Screenshot of above steps

You can see, it executed all the specified commands.

Comments in the shell script

Any line which starts with “#” in the shell script is treated as a comment and is ignored by the shell during execution, except the shebang line, which we will see later in this article. Let’s see an example. A shell script is created with the following content.

Yes, Shell scripts support the use of variables, and we need not define a variable’s type during its declaration. There are two types of variables:

System-defined variables, also called environment variables, are generally Capitalised. You can view all the current environment variables using the printenv command. User-Defined variables are set by the user, and they exist only during script execution. You can define a variable by simply typing its name and assigning a value with = sign and access a variable by adding a $ before the variable name. Variables are demonstrated in the following example script. 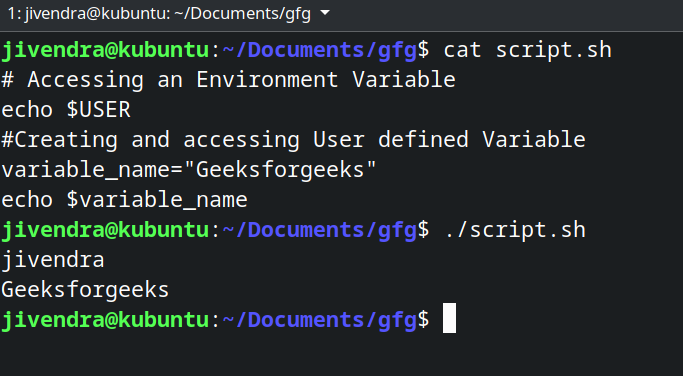 There are many Shells available in Linux, such as The bourne shell(sh), The Korn Shell(ksh), and GNU Bourne-Again Shell(bash). Scripts written for the sh shell are called shell scripts, and they can be interpreted by both, the ksh and bash shells. ksh and Bash are improved versions of the original sh shell and they have more features than sh. Bash is generally the default shell in most of the Linux Distributions and scripts written specifically for bash shell are called bash scripts.

This line is called the shebang line.

Note: This will only work if bash is installed on your system.

You can compare two variables in shell scripting. We do these comparisons to make decisions, we will see how to do that later in this article, but before that, here is a list of some comparison operators.

We add a \ before < and > because they need to be escaped when typed in the [ ] construct. Now, let’s see where these are used.

It checks the condition, and if it is conditioned true, it executes the commands. 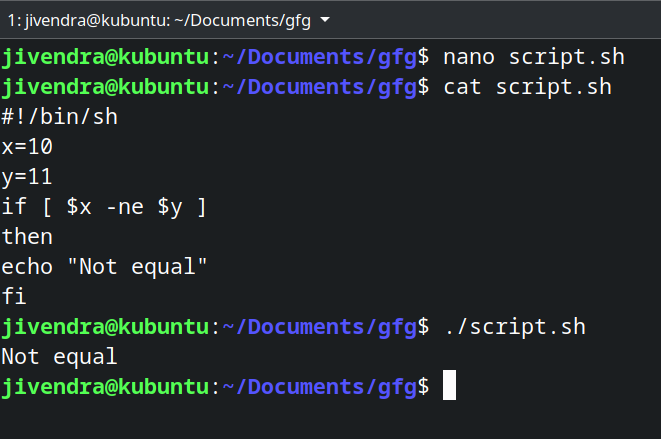 In an if-else statement, you can specify a set of commands to run if the condition is not met. 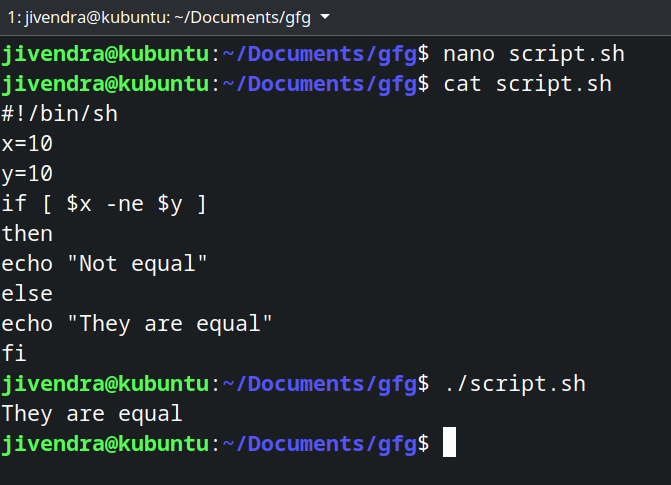 There are other conditional statements, you can read about them here.

Note: Type a space after [ and before ] while specifying the condition to be checked otherwise you will get an error.

Using loops, you can a set of commands over and over again, until a certain condition is met. Let’s see some of the loops. 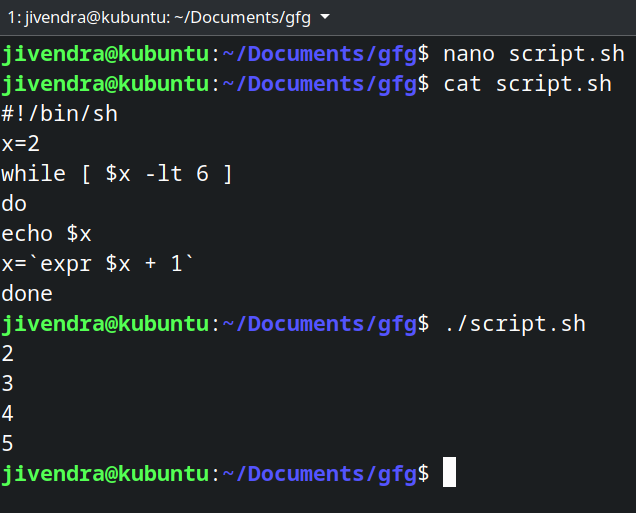 We enclose an expr statement within ` ` when assigning it to a variable. You can read about expr command here.

In a for loop, the variable iterates over a list of values and ends when there are no more values to iterate over. 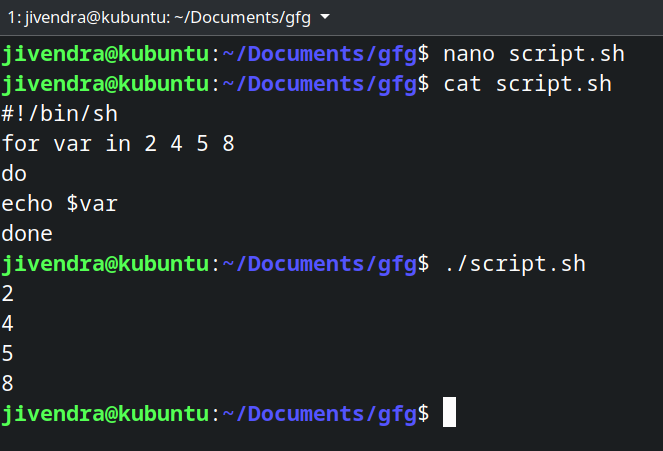 You can read about loops in detail here.

Positional arguments are the arguments or values which we pass to the shell script while executing the script. They are accessed by variables $0, $1, $2 … $9. Beyond that, they are referenced by ${10}, ${11} and so on. $# stores the no of passed arguments and $0 stores the name of the script. Let’s see an example to understand all this.

To pass the arguments, just type them in the terminal after the script name as shown below. 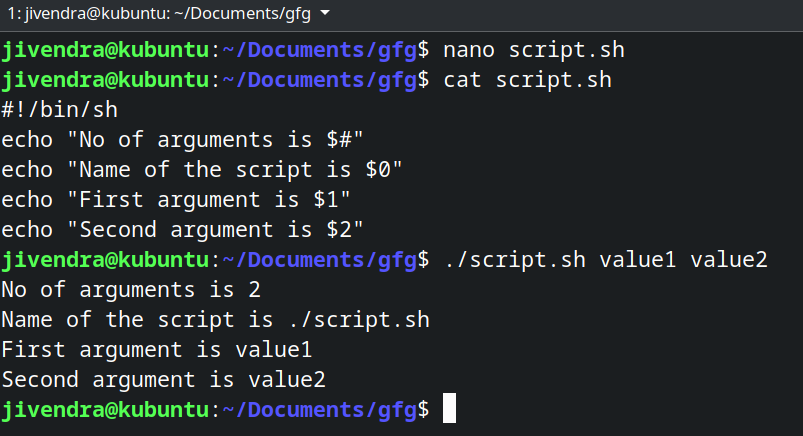 Storing the output of commands

You can store the output of commands inside a variable in a shell script. There are two ways to do so. 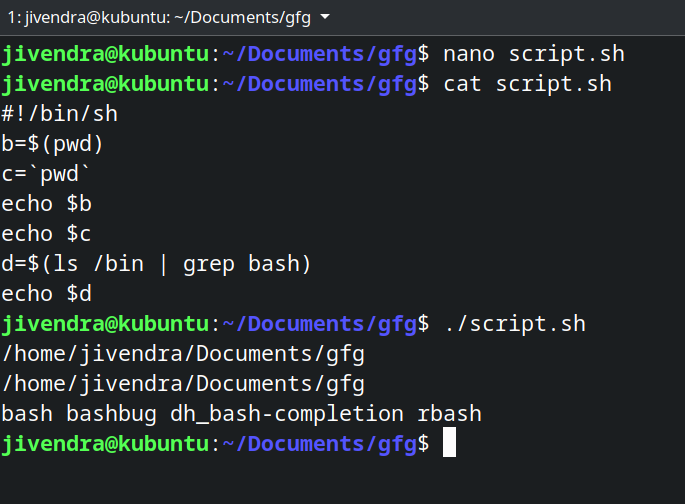 Storing the output of commands

Whenever a command ends and returns the control to the parent process, it returns exit codes between 0 and 255. Exit code 0 means the command was successful, and any other exit code means, the command was unsuccessful. You can view the exit code after running any command by accessing the #? variable. See the example below. 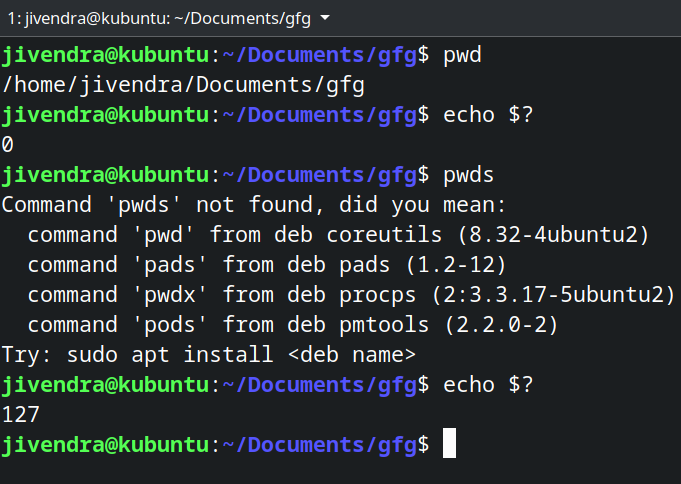 You can manually set an exit code for your shell script. This can be used with conditional statements to convey if the script’s purpose was achieved or not. 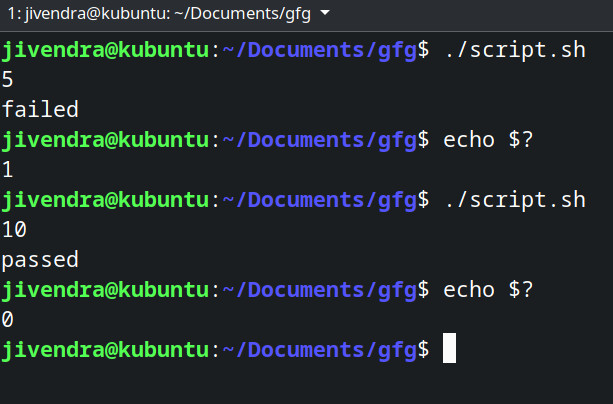