The following article discusses the Generalized linear models (GLMs) which explains how Linear regression and Logistic regression are a member of a much broader class of models. GLMs can be used to construct the models for regression and classification problems by using the type of distribution which best describes the data or labels given for training the model. Below given are some types of datasets and the corresponding distributions which would help us in constructing the model for a particular type of data (The term data specified here refers to the output data or the labels of the dataset).

Proof – Bernoulli distribution is a member of the exponential family.

Therefore, on comparing Eq1 and Eq2 :

Note: As mentioned above the value of phi (which is the same as the activation or sigmoid function for Logistic regression) is not a coincidence. And it will be proved later in the article how Logistic regression model can be derived from the Bernoulli distribution.

Proof – Gaussian distribution is a member of the exponential family.

Therefore, on comparing Eq1 and Eq3:

Constructing GLMs:
To construct GLMs for a particular type of data or more generally for linear or logistic classification problems the following three assumptions or design choices are to be considered:

The first assumption is that if x is the input data parameterized by theta the resulting output or y will be a member of the exponential family. This means if we are provided with some labeled data our goal is to find the right parameters theta which fits the given model as closely as possible. The third assumption is the least justified and can be considered as a design choice.

Linear Regression Model:
To show that Linear Regression is a special case of the GLMs. It is considered that the output labels are continuous values and are therefore a Gaussian distribution. So, we have 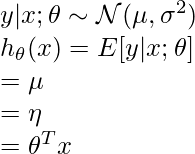 From the third assumption, it is proven that: