Given an array that represents the y coordinates of a set of points on a coordinate plane, where (i, arr[i]) represent a single point. Find whether it is possible to draw a pair of parallel lines that includes all the coordinate points given and also both lines must contain a point. Print 1 for possible and 0 if not possible.

Now, as y-mx=c is general equation of straight line here c = arr[i] -mi. Now, if the solution will be possible for a given array then we must have exactly two intercepts (c).
So, if two distinct intercepts exist for any of the above-mentioned three possible, the required solution is possible and print 1 else 0. 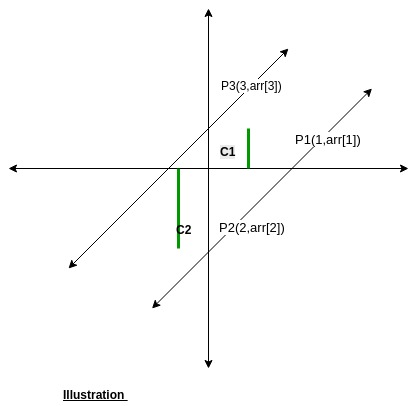 Auxiliary Space: O(N), since N extra space has been taken.

My Personal Notes arrow_drop_up
Next
Longest sub-sequence of array containing Lucas numbers
Recommended Articles
Page :
Number of parallelograms when n horizontal parallel lines intersect m vertical parallel lines
27, Dec 17
Check whether two straight lines are parallel or not
08, Feb 21
Number of lines from given N points not parallel to X or Y axis
09, Apr 20
Find any possible two coordinates of Rectangle whose two coordinates are given
02, Jul 21
Find a Symmetric matrix of order N that contain integers from 0 to N-1 and main diagonal should contain only 0's
12, Apr 19
Count rectangles generated in a given rectangle by lines drawn parallel to X and Y axis from a given set of points
09, Oct 20
Area of the largest rectangle formed by lines parallel to X and Y axis from given set of points
03, Nov 20
Distance between two parallel lines
22, Apr 19
Find the equation of plane which passes through two points and parallel to a given axis
23, Jun 20
Minimum length of square to contain at least half of the given Coordinates
13, Mar 19
Check whether two straight lines are orthogonal or not
15, Jan 19
Maximum number of region in which N non-parallel lines can divide a plane
14, Aug 19
Count of rectangles possible from N and M straight lines parallel to X and Y axis respectively
17, Jun 20
Count squares possible from M and N straight lines parallel to X and Y axis respectively
30, Sep 20
Count squares of unique dimensions possible from given Straight Lines parallel to the axes
29, Oct 20
Find Four points such that they form a square whose sides are parallel to x and y axes
30, Oct 18
Check whether two points (x1, y1) and (x2, y2) lie on same side of a given line or not
13, Aug 19
Coordinates of rectangle with given points lie inside
13, Mar 18
Find two numbers whose sum is N and does not contain any digit as K
23, Jul 20
Maximum Squares possible parallel to both axes from N distinct points
25, Mar 20
Program to check if the points are parallel to X axis or Y axis
06, May 18
Count of Squares that are parallel to the coordinate axis from the given set of N points
26, Mar 20
Count of Right-Angled Triangle formed from given N points whose base or perpendicular are parallel to X or Y axis
27, Aug 20
Minimum lines to cover all points
13, Apr 17
Article Contributed By :