Software products/services are tested multiple times before delivery to ensure that it is providing the required service. Testing before delivery doesn’t guarantee that no problem will occur in the future. Even some times the software application fails due to some unwanted event or due to network issues or due to server-related problems. The aim of failover testing is to respond to these types of failures.

Suppose that PC gets off due to some technical issue, and on restarting we open the browser, then a pop-up is shown saying Do you want to restore all pages? On clicking restore, all tabs are restored. The process of ensuring such restorations is known as FAILOVER TESTING.

Failover Testing :
Failover testing is a technique that validates if a system can allocate extra resources and backup all the information and operations when a system fails abruptly due to some reason. This test determines the ability of a system to handle critical failures and handle extra servers. So, the testing is independent of the physical hardware component of a server.

It is preferred that testing should be performed by servers. Active-active and active-passive standby are the two most common configurations. Both the techniques achieve failover in a very different manner but both of them are performed to improve the server’s reliability.
For example, if we have three servers, one of them fails due to heavy load, and then two situations occur. Either that failed server will restart on its own or another situation when the failed server cannot be restarted, the remaining servers will handle the load. Such situations are tested during this test. 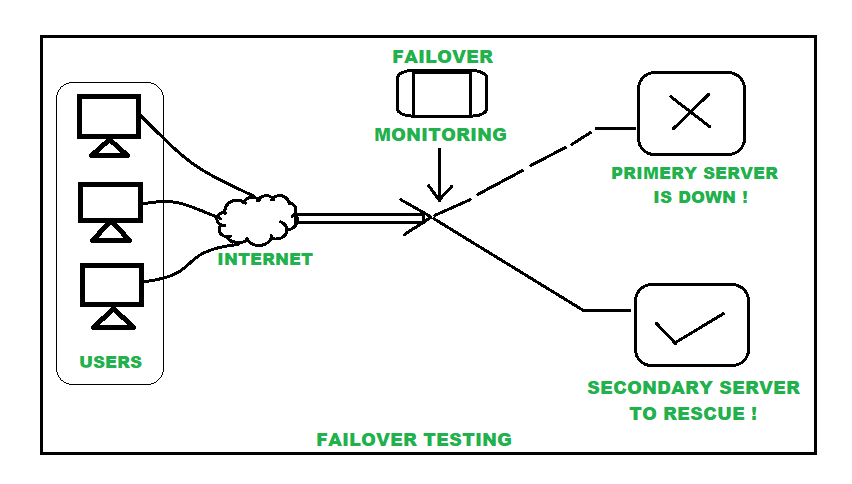 Once the failure in a system is identified, the issue is resolved and the system gets back to its previous form. The prime purpose of this test is to ensure to retain data and resources on time when crashes happen.