The basic idea of the discovery of the elementary particles was generated by Dalton Atomic Theory. John Dalton in 1808 gave the first scientific theory about atoms, in which, he stated that atoms are the smallest particle of any matter. They are indivisible and indestructible. According to Dalton Atomic Theory:

The above statements are called the Postulates of Dalton Atomic Theory. But, later these postulates were proved wrong as the first indication of sub-atomic particles came due to the study of static electricity by Faraday which says that the flow of electricity is caused by due to the charged particles.

Sir J. J. Thomson first proved the existence of negatively charged particles within an atom called electrons. Thus, the electron is the first sub-atomic particle to be discovered and this paved the way for the discovery of all other sub-atomic particles (i.e. proton and neutron) and also the actual structure of the atom.

J.J. Thomson and The Discovery of Electron 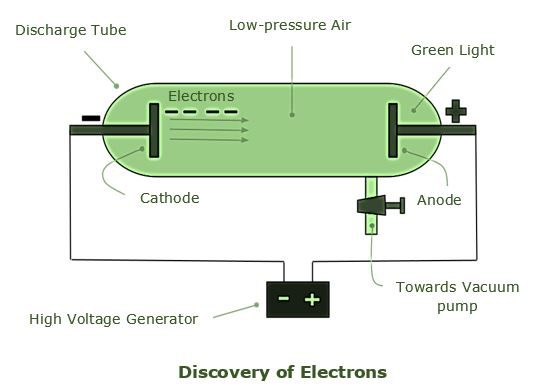 Thomson also installed two magnets on either side of the tube and noticed that the cathode ray was diverted by the magnetic field. Thomson used the findings of these tests to calculate the mass-to-charge ratio of cathode ray particles, which led to a surprising discovery: each particle’s mass was much, much lower than any known atom. Thomson continued his tests with several metals as electrode materials and discovered that the characteristics of the cathode ray were consistent regardless of the cathode material.

Thomson made the following findings based on the evidence:

Thomson’s discoveries were initially contentious, but they were progressively accepted by scientists. His cathode ray particles were eventually given a more common name: electrons. The discovery of the electron contradicted Dalton’s atomic theory’s assumption that atoms were indivisible. An altogether new atomic model was required to account for the presence of electrons.

What are Cathode Ray and Cathode ray tube?

J. J. Thomson built a glass tube that was partly evacuated, meaning that a significant amount of air was pushed out. He then used two electrodes at either end of the tube to apply a large electrical voltage. He saw a stream of particles (ray) travelling from the negatively charged electrode (cathode) to the positively charged electrode (anode) (anode). The ray is referred to as a cathode ray, and the entire structure is referred to as a cathode ray tube.

What is an Electron?

The electron is a negatively charged, low-mass particle. As a result, passing close to other electrons or the positive nucleus of an atom might readily deflect it. The first basic particle identified was the electron.

J.J. Thomson is credited with discovering the electron and its characteristics through tests conducted in a discharge tube. Subatomic particles with an elementary charge of -1 are known as electrons. The charge held by an electron is the same as the charge held by a proton (but has an opposite sign).

With a mass of 0.000549 amu, electrons are negatively charged particles. Protons and neutrons weigh roughly 1836 times as much as electrons. The number of electrons equals the number of protons, resulting in an element’s neutral atom. The chemical characteristics of an element are determined by its electronic arrangements, whereas the nuclear structure determines the atom’s stability and radioactive transition.

Question 1: What is the condition inside the discharged tube used by J. J. Thomson in the discovery of the electrons or Cathode rays?

The conditions inside the discharged tube used by J.J. Thomson in the discovery of electrons are:

Question 2: What is the effect of the electric field on the cathode rays?

Cathode rays are deflected from their own straight-line path under the influence of the electric field. They are attracted towards the positive field due to their own negative charge and repelled away from the negative field.

The two properties of Cathode rays:

Question 4: How are X-rays produced?

X-rays are produced when a beam of the cathode ray is made to fall on hard metallic substances like tungsten.

Question 5: How Faraday’s study of static electricity paved the way for the discovery of sub-atomic particles?

My Personal Notes arrow_drop_up
Previous
If tan (A + B) = √3 and tan (A – B) = 1/√3, 0° < A + B ≤ 90°; A > B, then find A and B
Next
Is the square root of 5 a whole number?
Recommended Articles
Page :
Arrangement of Electrons in the Atoms
20, Sep 21
Valence Electrons
27, Sep 21
Valency and Valence Electrons: Definition, Examples and Relation
22, Sep 21
What is a Proton? Definition, Discovery, Characteristics
11, Aug 21
Neutron - Discovery, Definition, Characteristics, Applications
01, Sep 21
Atomic Nucleus - Definition, Structure, Discovery, Characteristics
18, Oct 21
Link Layer Discovery Protocol (LLDP)
15, Oct 21
What is Cisco Discovery Protocol (CDP)?
01, Nov 21
What are CDP (Cisco Discovery Protocol) Attacks?
22, Nov 21
Oxygen - Discovery, Occurrence, Preparation, Properties
20, Dec 21
Which tag is used to define the abbreviation of an element in HTML ?
23, Jan 22
What are the different utility classes in Materialize CSS ?
23, Jan 22
Article Contributed By :