Difference Between sleep and yield Method in Java

In java if a thread doesn’t want to perform any operation for a particular amount of time then we should go for the sleep() method, which causes the currently executing thread to stop for the specified number of milliseconds.

Every sleep() method in java throws an InterruptedException which is a checked exception hence whenever we are using the sleep method compulsory we should handle it either by try-catch or by throws keyword otherwise we will get compile-time error.

Implementation: Here, we put the main thread in sleep for 5second after the “println” statement. So every slide takes 5second to print. 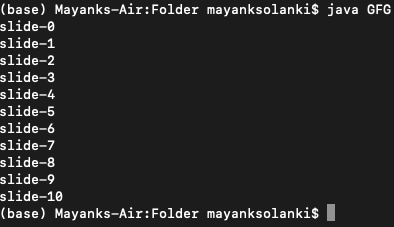 Note: Here slide-1 will be printed after slide-0 after 5000 nanoseconds so do apply for the rest of all the slides. Hence this output will be displayed taking a certain time in execution in the runtime state.

So finally we are done with both the methods, let s finally conclude the differences between them.