Difference between Reversible and Irreversible Processes

In simple words, it can be stated that the energy of an isolated system is constant.

The second law of thermodynamics can be described as follows-

All spontaneous processes (or naturally occurring processes) are thermodynamically irreversible.

The aforesaid procedures can, still, be convinced about in the reverse direction by operating some accidental agency, For example, water can be fabricated to advance uphill with an electric motor, tea can be framed hot again by heating. Hence, the second law can be outlined alternatively as follows –

Without the help of an external agency, a spontaneous process cannot be reversed, example heat cannot by itself flow from a colder to a hotter body.

The entropy of all ideally crystalline solids may be taken as zero at the absolute zero of temperature.

The process in which the system and the surroundings can be rebuilt from the final state to the original state without any change in the thermodynamic properties of the universe is called a reversible process. 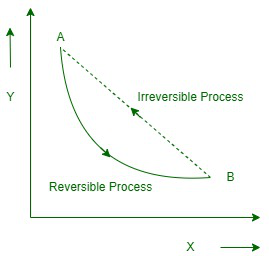 All the state fluctuations that occur during the reversible process are in thermodynamic equilibrium with each other. So there are two consequent contingencies to doing the reversible process. Basically, the process must take place in an infinitely short path and second all the original and final states of the system must be in equilibrium with each other. 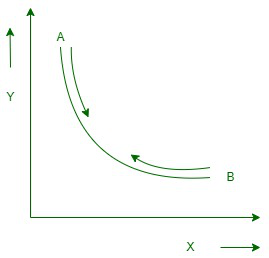 There are two types of reversible process which are presented below-

Also, water flows from high level to low level, current overflows from high potential to low potential, etc. The original state of the system and the environment cannot be recreated from the final state in an irreversible process. 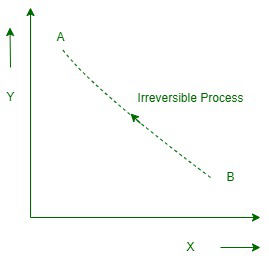 There are two types of irreversible processes which are presented below-

Difference between Reversible and Irreversible Process

Question 1: Water decomposes by absorbing 286.2 kJ of electrical energy per mole. When H2 and O₂ combine to form one mole of H₂O, 286.2 kJ of heat is produced. Which law is proved? What statement of the law follows from it?

Law of conservation of energy (or 1st law of thermodynamics) is proved here. According to which the energy can neither be created or destroyed, although it may be converted from one form to another.

Question 2: The water can be raised with the help of a pump to the water tank located at the top of the house. Then why is it not considered spontaneous?

A spontaneous process should continue to happen on its own after initiation. But in the given case it is not so as long as the pump is working the water will go up.

Question 3: We are consuming a lot of electrical energy, solar energy etc. Therefore, do you conclude that the energy of the universe is continuously decreasing? Explain. Which other thermodynamic quantity is continuously increasing or decreasing?

Question 4: Explain why the entropy of a pure crystalline substance is zero at 0K? Mention the law on which it is based. enforce this law?

At 0 K, the constituent particles of a pure crystalline substance have an orderly arrangement and no disorder. Therefore, its entropy is taken to be zero. This statement is based on the third law of thermodynamics. The law is applied to find the absolute entropy of a substance in any given state at any given temperature.