A typing test is designed to find how fast one types in a given amount of time. We will be designing a typing game using JavaScript that presents a simple typing challenge and finds the performance of typing by calculating the Characters Per Minute (CPM), Words Per Minute (WPM) and the accuracy of the typed characters.
The game shows a series of quotes that have to be typed in a specified time limit, as fast as possible. A higher typing speed would show a higher WPM value. Incorrectly typed characters would be marked accordingly during typing.
We will create the HTML layout first, style it using CSS and then write the logic in JavaScript.
The HTML Layout: The HTML layout defines the element structure that would be shown on the page. This includes:

Note: Each of the portions is filled with dummy data to make styling easier. The HTML code of the above is as follows.
The CSS Styling: CSS is used to style the different portions and make it more visually appealing.

The result of the HTML layout and CSS styling would look like this: 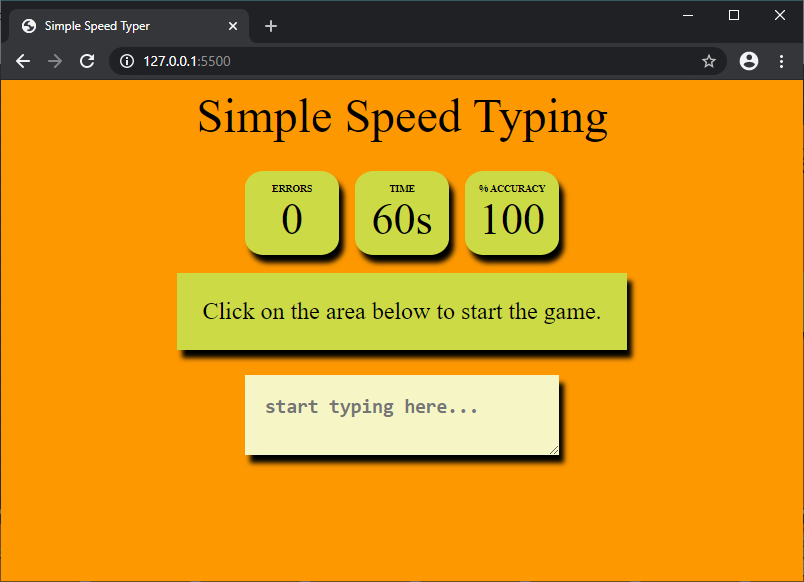 Main Logic of the game: The main logic of the game is defined in a JavaScript file. There are several functions that work together to run the game.
Step 1: Selecting all the elements and defining variables
The required elements in the HTML layout are first selected using the querySelector() method. They are assigned variable names so that they could be easily accessed and modified. Other variables that would be accessed throughout the program are also defined in the beginning.

Step 2: Preparing the text to be displayed
A function updateQuote() is defined which handles the following things:

Step 3: Getting the currently typed text by the user
A function processCurrentText() is defined which will be invoked whenever the user types or changes anything in the input box. It is hence used with the oninput event handler of the input box. This function handles the following things: 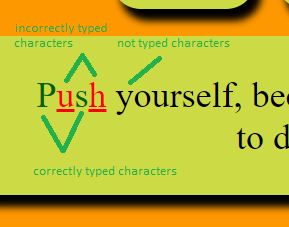 Coloring of the characters based its correctness

Step 4: Starting a new game
A function startGame() is defined which will be invoked when the user focuses on the input box. It is hence used with the onfocus event handler of the input box. This function handles the following things:

Step 5: Updating the timer
A function updateTimer() is defined which will be invoked every second to keep track fo the time. This function handles the following things:

Step 6: Finishing the game
A function finishGame() is defined which will be invoked when the game has to be finished. This function handles the following things:

Final Demonstration
The game is now ready to be played in any browser.