Electric charge is a physical property of matter, because of which it experiences a force in the presence of an electric field. These charges lay the foundations for the field of electrostatics and big disciplines such as electrical engineering. Electric charge is what flows through our wires when a current is passed through them. It allows electricity to exist in our real lives. The charge is either positive or negative, it can neither be destroyed nor be created. It can only be transferred from one body to another body. This is the idea behind the law of conservation of charges. Let’s look at these concepts in detail.

All the materials in this world are made up of atoms and molecules. In ordinary cases, all these atoms and molecules are electrically neutral with all the charges balanced. To electrify a neutral body, one of the kinds of charges needs to be removed. A charged body always means either a deficit of electrons or an excess of electrons. Electrons are assumed to be carrying the negative charge. Thus, a body can be positively charged by removing some electrons from the atom. Similarly, the same body can be charged negatively by gaining some electrons.

In real life also, whenever a body is rubbed with another body. One of the bodies loses electrons and the other gains and thereby gets electrified. Electricity flows due to the flow of charge. There are some substances that allow the passage of electricity through them, while others do not. These substances are classified as conductors or insulators.

Conductors: Conductors are those substances which allow the passage of electricity through them. They have electric charges(electrons) which are relatively free to move around the body of the conductor.

Insulators: Insulators are those substances which do not allow the passage of electricity through them. They also have electric charges(electrons) but they are not free to move around in the body. Thus, this body cannot conduct electricity.

It is known that when bodies are rubbed together, there is an exchange of electrons which creates a charge in the bodies. Notice that, in this process, the charge is being transferred from one body to another body, but no charge is being created or destroyed. An isolated system is a system that has no contact with anybody outside the system. In such a system, charges can only be generated through the transfer of charged particles from one body to another. This is the idea behind the law of conservation of charge.

For an isolated system, the total charge inside the system is always conserved.

It is not possible to create or destroy the net charge inside an isolated system. Although the charge can be created by some natural processes, it always maintains the law of conservation of charge. For example, in nature, sometimes in the radioactive process, a charge is created. For example,

A neutron dissociates itself to create a proton and an electron. In this phenomenon, the charge is created but the net charge of the system remains constant. 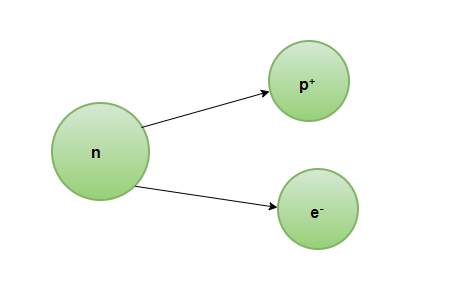 Suppose there is a system of multiple bodies, now such systems can lie in two states:

Charges can be classified into positive and negative charges. These charges can be added algebraically. A charge has only a magnitude and nature, but there is no direction. These signs are used while doing the addition and subtraction on charges. For example, let’s say a system has two bodies with charges q1 and q2. Let the total charge be q,

To generalize the above rule, let’s say there are n-charges in a system q1, q2, ,…..qn. The total charge on the system is given by,

As mentioned above, the charge on the body is developed due to the exchange of electrons. This means, that any charged body must have a charge which is a multiple of the smallest unit of charge “e”. “e” is considered as a charge on electrons and its value is,

Question 1: State whether the following statements are true or false:

Wood is an insulator; it cannot conduct electricity.

In a conductor, there are some electrons which can move around freely inside it. For this reason, it is able to transfer the charge and conduct electricity.

No, the smallest unit of the charge is “e”, which is the charge held by an electron. When bodies are charged, they transfer electrons. For developing a charge of 0.5e, that means only half of the electron should be transferred. There is no technique to split an electron into two parts.

The statement is a little misleading, charge is conserved but for only those systems which are isolated.

Question 2: The system given in the figure below comprises multiple bodies. These bodies hold some charges. The charges are q1 and q2, and the value of charges are +5C and -2C respectively. Find out the net charge on the system.

Question 3: The system given in the figure below comprises multiple bodies. These bodies hold some charges. The charges are q1, q2, q3, and q4, and the value of the charges are +5C, +10C, -2C, -15C respectively. Find out the net charge on the system.

Question 4: How many electrons are transferred when there is 1C charge on a body.

Question 5: How many electrons are transferred when there is -10C charge on a body.

Question 5: Find the negative charge in one mole of water.