Electric Charge is something which can be seen and experienced also in our daily life. The concept of electric charge came first after the observation of amber attracting light pieces like hairs, features after it gets rubbed with a silk cloth. There the scientist gave a thought as to why it happened, then they collected some more real-life examples to understand why this happened.

Other examples include rubbing of plastic comb with dry hair, and then it attracts the paper. All these examples lead to the understanding of electric charges. It came to be known that these objects gain charges and hence are known as charged objects.

Lightning is a natural phenomenon that is caused due to the buildup of charges within the cloys. Charges of an equivalent kind repel every other whereas charges of a distinct kind attract one another. The moving charges represent an electrical current.

Benjamin Franklin proved that lightning is electricity in 1752 with his famous kite-flying experiments. He designed the lightning rod because he wanted his experiment to be useful.

During a violent storm, the air currents move upwards whereas the water droplets move downward. These vigorous movements cause separation of charges. This results in the positive charges collected close to the higher edges of the clouds and also the electric charge accumulating close to the clouds’ lower edges There is an accumulation of positive charges close to the bottom additionally. Negative and positive charges meet, manufacturing streaks of bright lightweight and sound. We tend to see streaks as lightning. The method is thought of as a spark. The method of an electrical discharge between completely different clouds or between clouds and also the earth causes lightning. A lightning strike might destroy life and property. Therefore, it’s necessary to require measures to shield ourselves.

The Sparks that Greeks knew about

As early as 600 B.C., the ancient Greeks discovered that rubbing amber (a form of resin) with fur attracted light artifacts like hair etc. It may have noticed that hair hangs on ends when removed from woolen or polyester clothing. In the dusk, you can see a light and hear a crackling sound as you remove this clothing. Benjamin Franklin, an American astronomer, demonstrated in 1752 that lightning and clothing sparks are exactly the same phenomena. However, it took 2000 years for this realization to occur.

It is known that an atom is made up of subatomic particles that are: electrons, protons, and neutrons. These particles have one thing in common that is they all have electric charges.

Hence, the sum of energy or electrons that travel from one body to another through various modes such as conduction, induction, or other special methods is referred to as electric charge.

Electric charges are divided into two categories. There are two types of charges: positive and negative.

Charges can be found in nearly all types of bodies. The neutrally charged bodies are those that have no charge.

When two things are rubbed together, electrons are transferred between them, and they become charged. Also, when a rubber balloon is rubbed with animal fur, such that the rubber balloon attracts the electrons from the animal fur. As a consequence, rubber has an abundance of electrons whereas fur has a scarcity of electrons. These are known as charged objects.

Types of Charges and its Interaction

When a positive and negative charge is in proximity, they attract.

When two positives or two negatives come close to each other, they repel. These rubbing-generated electrical charges are static in nature.

Let us perform an activity to understand what are different types of charges.

Rub two balloons with wool and keep them aside. Rub two pen refills with polythene and keeps them in a stand. 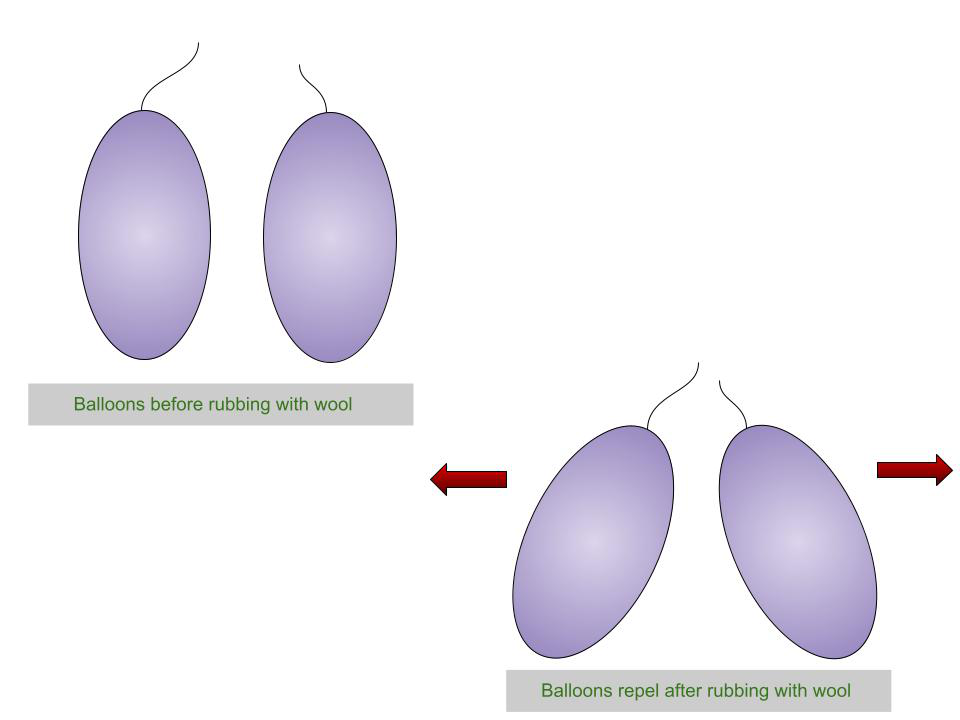 Balloons before and after rubbing with wool

Conduction and induction are two methods for transferring charges from one object to another. Therefore, they can be defined as:

It is a machine that can determine whether an object is charged. In 1787, Abraham Bennet invented a gold leaf electroscope.

Since gold and silver are good conductors of electricity, so they are commonly used in the construction of electroscopes. On the other hand, Copper, and aluminum can also be used.

A vertical brass rod is attached to a glass pot. Via the cork, the rod is lowered into the pot. A brass disc or horizontal rod is fixed to the brass bar, while two gold leaves are hanging on the other end.

Electric charges are moved from the brass rod to the gold leaves as a charging force contacts the brass disc. As a consequence, the gold leaves turn away from one another, showing that there are charges present.

A charged item is considered to be discharged when it removes its charges. Earthing is the process of a charged object transferring its charges to the ground.

Any house, in general, is equipped with earthing to shield it from electrical shocks caused by the electric current leakage.

Question 1: What is a static force?

The force of attraction or repulsion veteran by charged objects is termed static force.

Question 2: How does the movement of electrical charges result in charge conservation?

Since a neutral object has no charge at all, therefore when an object absorbs electrons from another object, the first object’s net negative charge equals the second object’s net positive charge. Charges are conserved in this manner when charges are transferred.

Question 3: Name the two types of charges and mention what type of interaction exists between them?

Question 4: What is the static charge? How does it differ from electric current?

Question 5: If aluminum strips of an electroscope are replaced by plastic strips and a charged body is brought in contact with the metal clip. What will happen?