Sorting is defined as an arrangement of data in a certain order. Sorting techniques are used to arrange data(mostly numerical) in an ascending or descending order. It is a method used for the representation of data in a more comprehensible format. It is an important area of Computer Science. Sorting a large amount of data can take a substantial amount of computing resources if the methods we use to sort the data are inefficient. The efficiency of the algorithm is proportional to the number of items it is traversing. For a small amount of data, a complex sorting method may be more trouble than it is worth. On the other hand, for larger amounts of data, we want to increase the efficiency and speed as far as possible. We will now discuss the several sorting techniques and compare them with respect to their time complexity. 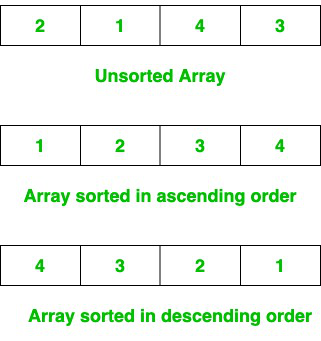 Some of the real-life examples of sorting are:

Before discussing the different algorithms used to sort the data given to us, we should think about the operations which can be used for the analysis of a sorting process. First, we need to compare the values to see which one is smaller and which one is larger so that they can be sorted into an order, it will be necessary to have an organized way to compare values to see that if they are in order.

The different types of order are:

The different implementations of sorting techniques in Python are:

Bubble Sort is a simple sorting algorithm. This sorting algorithm repeatedly compares two adjacent elements and swaps them if they are in the wrong order. It is also known as the sinking sort. It has a time complexity of O(n2) in the average and worst cases scenarios and O(n) in the best-case scenario. Bubble sort can be visualized as a queue where people arrange themselves by swapping with each other so that they all can stand in ascending order of their heights. Or in other words, we compare two adjacent elements and see if their order is wrong, if the order is wrong we swap them. (i.e arr[i] > arr[j] for 1 <= i < j <= s; where s is the size of the array, if array is to be in ascending order, and vice-versa).

At the end of the first iteration, the largest element is at the rightmost position which is sorted correctly.

The remaining elements are already sorted in the first and second Iterations. After the three iterations, the given array is sorted in ascending order. So the final result is 1, 2, 10, 23.

This sorting technique repeatedly finds the minimum element and sort it in order. Bubble Sort does not occupy any extra memory space. During the execution of this algorithm, two subarrays are maintained, the subarray which is already sorted, and the remaining subarray which is unsorted. During the execution of Selection Sort for every iteration, the minimum element of the unsorted subarray is arranged in the sorted subarray. Selection Sort is a more efficient algorithm than bubble sort. Sort has a Time-Complexity of O(n2) in the average, worst, and in the best cases.

Here we sort the following sequence using the selection sort

Sorted Array in Ascending Order is :

This sorting algorithm maintains a sub-array that is always sorted. Values from the unsorted part of the array are placed at the correct position in the sorted part. It is more efficient in practice than other algorithms such as selection sort or bubble sort. Insertion Sort has a Time-Complexity of O(n2) in the average and worst case, and O(n) in the best case.

Here we sort the following sequence using the insertion sort