Grammar denotes the syntactical rules for conversation in natural language. But in the theory of formal language, grammar is defined as a set of rules that can generate strings. The set of all strings that can be generated from a grammar is called the language of the grammar.

The Membership problem is defined as: Grammar G generates a language L(G). Is the given string a member of L(G)?

Cocke-Younger-Kasami Algorithm
It is used to solves the membership problem using a dynamic programming approach. The algorithm is based on the principle that the solution to problem [i, j] can constructed from solution to subproblem [i, k] and solution to sub problem [k, j]. The algorithm requires the Grammar G to be in Chomsky Normal Form (CNF). Note that any Context-Free Grammar can be systematically converted to CNF. This restriction is employed so that each problem can only be divided into two subproblems and not more – to bound the time complexity.

How does the CYK Algorithm work?

For a string of length N, construct a table T of size N x N. Each cell in the table T[i, j] is the set of all constituents that can produce the substring spanning from position i to j. The process involves filling the table with the solutions to the subproblems encountered in the bottom-up parsing process. Therefore, cells will be filled from left to right and bottom to top.

In T[i, j], the row number i denotes the start index and the column number j denotes the end index.

The algorithm considers every possible subsequence of letters and adds K to T[i, j] if the sequence of letters starting from i to j can be generated from the non-terminal K.  For subsequences of length 2 and greater, it considers every possible partition of the subsequence into two parts, and checks if there is a rule of the form A ? BC in the grammar where B and C can generate the two parts respectively, based on already existing entries in T. The sentence can be produced by the grammar only if the entire string is matched by the start symbol, i.e, if S is a member of T[1, n].

Let us start filling up the table from left to right and bottom to top, according to the rules described above:

The table is filled in the following manner:

We see that T[1][5] has NP, the start symbol, which means that this phrase is a member of the language of the grammar G.

The parse tree of this phrase would look like this: 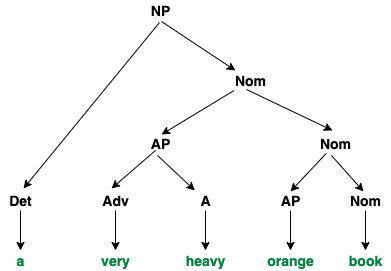 Let us look at another example phrase, “a very tall extremely muscular man”:

We will now use the CYK algorithm to find if this string is a member of the grammar G:

We see that T[1][6] has NP, the start symbol, which means that this phrase is a member of the language of the grammar G.

Below is the implementation of the above algorithm: