Career Paths For Software Developers and Programmers in 2019 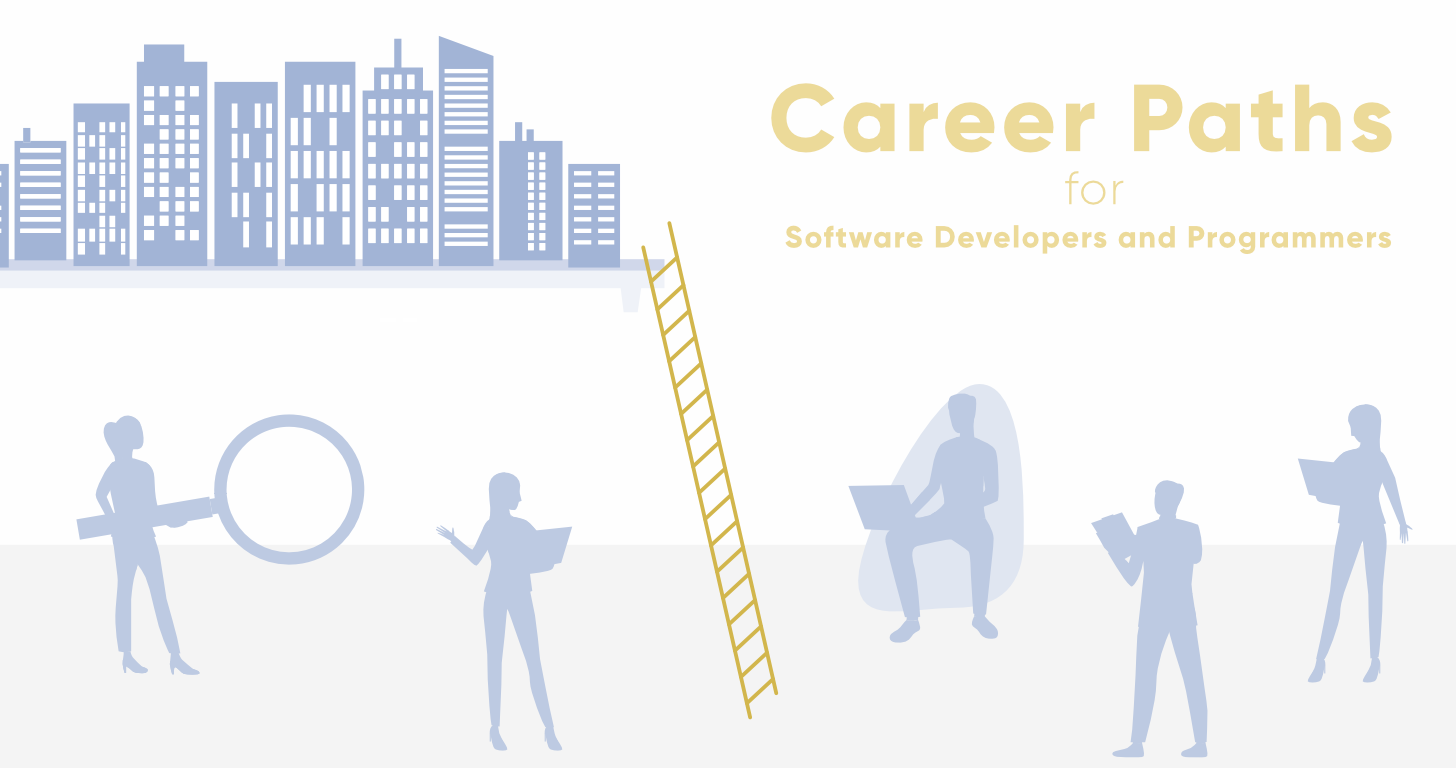 These kinds of software engineers are specialized in the code that runs in the web browser. These developers are good in creating a user interface of the website or they do some designing work. They work on the front end part using HTML, CSS, JavaScript or other front end technologies and frameworks. So basically UI/UX designers come in this category. If you are good in creating beautiful responsive websites then definitely a lot of options are available for designers as a freelancer or working for some companies.

Every day a new application is coming out to use on our phone. Mobile engineers or developers make these apps like Snapchat, voice recorder, music player, etc. Mobile developers also work very closely with designers and they take care of every single little pixel. They are specialized across different platforms like Android or iOS.

All the development which is done behind the scenes categorized under back-end development. These developers write the code for server-side development. They focus on manipulating database, different kind of APIs, the architecture of a system, scripting, etc. Their work gives powers to the web page or mobile applications. In order to become a back-end developer, you should have a good logical, analytical and problem-solving skill, also a server-side programming language to use in your code. They deal with highly complex problems and give solutions for that.

These software developers do not create software which is commercially published or sold. Their job role involves creating tools which are used within an organization. These tools help the organization or other team members to make their job easy and fast. Enterprise developers need to have a deep understanding of the organization, their requirements, and everything.

This is the super trendy and hottest job nowadays among engineers and developers. It’s populated recently and demand of data scientist is high in the market in comparison of other jobs. It’s a huge and fast-growing area. Data scientists are highly paid but you need to be master in Machine Learning. Coming to the point of job responsibility involved in this field, so data scientist look through the data and come up with some patterns or trends. They also look through the data analytics problem and apply some algorithm or write programs to give some solution to the organization. Their job role also involves storing, manipulating or organizing the large or big amount of data. If you want to go to this field you need to be good in machine learning, mathematics or statistics. Python and R these two programming languages data scientists use widely in their job role. Every business involves a huge amount of data, so definitely demand of data scientists is increasing day by day in industries.

Most of the time QA/Test engineers are underrated engineers, but they are also important when it comes to testing software or finding a bug before launching the product in the market. These engineers develop software that tests other code. Most of the beginners don’t know how to test their code so we need to understand the importance of QA engineers in an organization especially in these such kinds of situations. QA engineers build tools for testing and they also write automated tests to execute and verify the functionality and give us the result of software or product. If you love to enjoy all these stuff then go for that.

This field involves a lot of research and Ph.D. or at least a master degree. Their job role involves reading a lot of papers, doing research every day to turn academic concepts and theories into real-life solutions. They come up with new algorithms or optimize an existing one. A good example is to think of a person who wrote google maps to go from one place to another in the shortest time possible. These computer researchers or scientists are generally employed by universities, banks or big companies like Microsoft or Google. It involves highly quantitative problem-solving skill also a lot of optimization, fine-tuning, quantum computing and in-depth research. To understand this field in a better way you can check these links Microsoft Research, Google Brain, Open AI, Facebook Research.

These programmers write very low-level code that powers the system. Most of the people do not consider this one as the coolest job but think of a refrigerator, printer, oven or toaster kind of electronics items which also require a programmers brain to develop its functionality and make your life easier. The code involves here potentially runs before the operating system even loads. These developers work on the real-time operating system and they write the code that actual hardware needs to function properly. They work closely with hardware engineers because they are the one who writes the device drivers. You need to have a good understanding of hardware and software aspects, also knowledge of low level and high levels languages such as Java, XML, Perl, Python, Shell Scripting, C/C++, assembler and others. Qualcomm, Intel, Tata Elxsi, HCL Technologies these all companies hire embedded software engineers.

These engineers are kind of network or system administrator. Their job role is to handle the whole infrastructure and all the engineering needs behind any company like what type of computers do we need, how to fix the security bug, how to back up the database every day. They also manage a lot of engineering workflow and processes to make other developers work easier and they take care of frequent changes in code version as well. Companies hire these engineers when the system is too big and they need someone to manage and take the system responsibility completely. If you are good in Linux fundamentals, with a firm knowledge of any scripting language like Python, Ruby, Perl then you can go in this field but in their job role, they rarely write code from scratch. They have an understanding of tools and technologies like source control (Git, Bitbucket, SVN), infrastructure automation (Puppet, Chef), Cloud (AWS, Azure, Google Cloud). They take care of the security issue and also perform testing.

This is a common term used by the companies to hire developers who can work on both front-end and back-end technology or web frameworks. It definitely involves both of the skill set of front-end and back-end. They deal with databases, servers, front-end part and a lot of things to build a complete product. Basically, you should have good knowledge of all kind of software engineering to build a product. They are good in a variety of skill set. Most of the companies hire developers who can have a different skill set to work on a product.

We use different languages to create applications but if we talk about who created these actual languages, these people are language/compiler developers. Someone created C or C++ or someone used C++ to create Python, so there are tons of languages and multiple ways to implement one language. We use Python or Ruby but engineers who created these languages really study fundamentals and organization of how computer language is actually structured. Compiler developers also write the code for the implementation of the compiler which converts these code to machine language so that a computer can understand.

This is also a fairly new term which is in the market. Today most of the applications are on the cloud so these engineers job role involves planning, designing, managing and implementing applications on the cloud. They are responsible for the whole cloud infrastructure of a company, it’s maintenance and implementation. A skill set which is required here is generally degree in computer science and some cloud system certification will also work. You should have knowledge about Linux, database, cloud platforms. AWS(Amazon Web Service), Google Cloud, Microsoft Azure, Alibaba these are some examples of cloud platforms.

Now here is an important point that we need to discuss whatever field you choose in your software development career you will be categorized as an employee working for a company or a freelancer or an entrepreneur. Now it depends on someone’s skill set, interest and future growth where they want to give a kick start. At some point most of the companies say “No code anymore” and after years of experience you might have to move in a management role but some of the big companies like Microsoft, Google, HP, Apple hire best technical people to create special technical tracks for a product. Again I will suggest that the choice is yours’s to choose a career path considering all these facts, role, interest and definitely growth in the future.

My Personal Notes arrow_drop_up
Next last_page
Is it okay to be an Average Student?
Recommended Articles
Page :
Top Career Paths in Machine Learning
13, Jun 19
Design Patterns : A Must Skill to have for Software Developers in 2019
16, Aug 19
Websites and Software that help HTML, CSS And JavaScript Developers
20, Aug 20
How to Start a Career in Software Testing - A Complete Guide!
10, Jul 20
Do programmers need a Computer Science degree to get a job?
14, Sep 18
5 Women Programmers Who Changed The World!
10, Aug 19
Why Programmers Should Have a Youtube Channel?
12, Sep 19
Top Programmers in the World of All Time
26, Sep 19
5 Tips On Learning How to Code - General Advice For Programmers
09, Nov 19
Black Friday Sale - Programmers Have Carts, GeeksforGeeks Has Deals!
25, Nov 19
5 Effective Productivity Hacks For Programmers
07, Sep 20
Geek Week 2020 - The Biggest Festival for Programmers is Back
07, Oct 20
What Difficulties are Faced by Self-Taught Programmers?
17, Nov 20
7 Most Recommended Programming Habits for Software Developers
31, May 19
Challenges of Software Developers
15, Jun 20
Imposter Syndrome In Software Developers: Am I A Fake Developer?
02, Dec 19
Why Data Structures and Algorithms are "Must Have" for Developers and Where to learn them : Answered
15, May 19
7 Most In-Demand and Well-Paying Career Options For 2021
17, Dec 20
10 Useful Chrome Extension For Web Developers And Designers
08, Nov 19
8 Useful Testing Tools, Libraries and Frameworks For React Developers
06, Jul 20
Career Opportunities in Big Data
04, Sep 15
How can You Boost Your Career to the Next Level?
21, Apr 20
Tips for restarting career after a break
12, Oct 18
UI vs UX Design : Which Career Option Should You Choose?
07, Jun 19
Article Contributed By :