Build a Simple Beginner App with Node.js Bootstrap and MongoDB

Node.js is one of the famous open-source environments that allows to you run javascript scripts outside the browser. MERN and MEAN stacks are the two most popular combination that helps you to create an amazing application. In this article, we will be creating a simple beginner-friendly Contact Form App with Node, Bootstrap, and MongoDB. Before starting the project we have to make sure that Node.js and MongoDB are installed in your system. 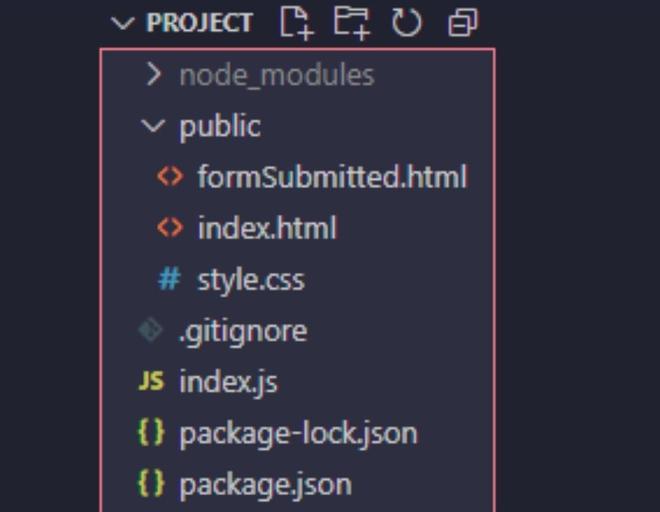 Step 1: Create a project folder and open that folder in your IDE.

First to create a package.json file with values that you supply, use the npm init command in the terminal of IDE.

You can customize the questions asked and fields created during the init process or leave it as default. After the process, you will find the package.json file in your project folder.

Step 2:  Next create an index.js file in the project folder, which will be the entry point of the app.

It will take some time to install the dependencies and after it’s done, a folder named node_modules will be created and in the package.json file under dependencies, you will find the name of all the installed dependencies along with their version. 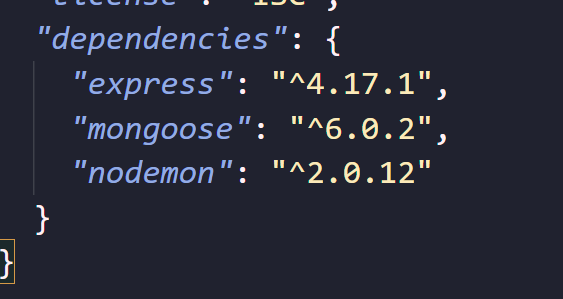 Step 4:  We will next open the index.js file and create a simple express app with the following code.

This code creates a simple express app that starts a server and listens on port 80 for connections. The app responds with “Hello World” for requests to “/”.

Step 5: To run the code, go to terminal and type

Step 6: Then open your browser, use http://localhost, or simply localhost to access the server from itself. 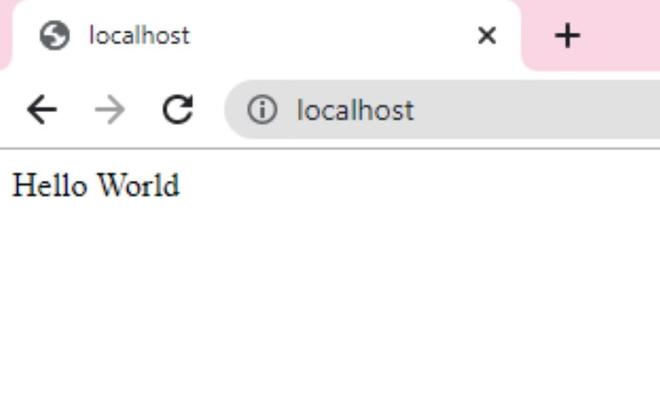 The page shows “Hello World”, which means our express app is working properly.

Step 8:  Create a folder named public inside the project folder. We will create all the static HTML files in the public directory of our project.

Step 9: Now we are going to connect to the mongoose database by using the following code. The name of the database for this project is given as projectDG

Step 10: Next, we are going to define a post method to save the data of the contact form to our database. We define our data object and create collection named users here. On successful data insertion, we will redirect to formSubmitted.html

This is the main part of the index.js file where the post request will be handled and proper transfer of the data will be taken place from the client request to the main database server.

Step 11: Now we will create index.html, formSubmittedhtml, and style.css files inside the public folder. 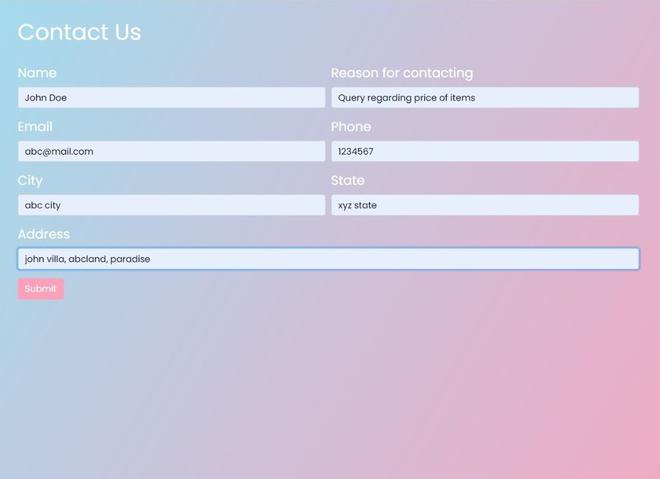 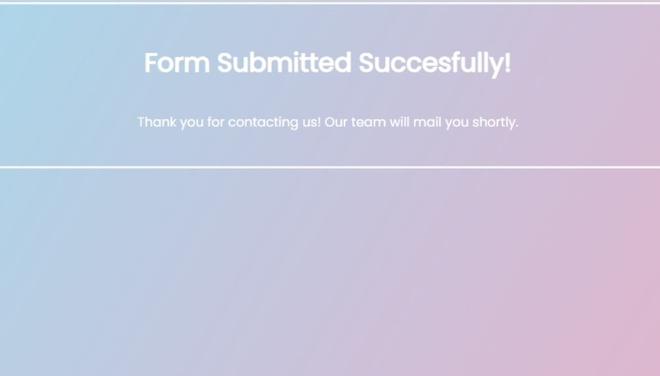 Step 12: After creating these three files, we are almost done with our project. We will now start MongoDB. Open the Windows Powershell window and then type the command mongod.

Open another Windows Powershell window and type the command mongo

Step 13: Open your IDE, and in the terminal type nodemon index.js  to start the app. Go to localhost.

Note: Data inserted successfully will be print after handling the post request properly.

This command lists all the databases in mongoDB:

This command will let us switch to our database:

This command we will  check of a particular  data in the collection: 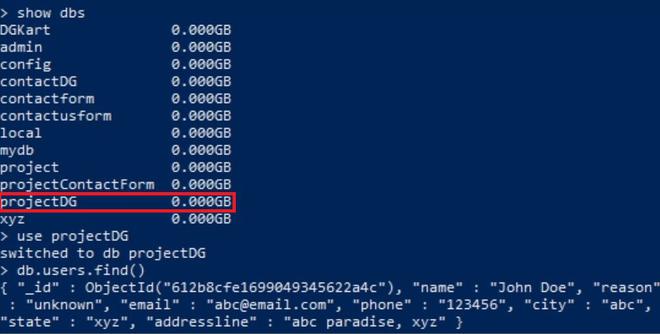 We can see clearly out data has been inserted in the MongoDB database.

Previous
How to show/hide an element using jQuery ?
Next
How to customize links for pagination in Bootstrap ?
Related Articles
1. Build a simple Song Lyrics Finder app using ReactJS
2. How to Build a Simple and Scalable Web API using Nest.js and Typescript ?
3. Build a Simple static file web server in Node.js
4. How to build a simple Discord bot using Node.js ?
5. How to Build a Simple Web Server with Node.js ?
6. Create Newsletter app using MailChimp and NodeJS
7. How to build a basic CRUD app with Node.js and ReactJS ?
8. Build a Site Bookmark App With JavaScript by using Local Storage
9. Build a Grocery Store Web App using PHP with MySQL
10. How to build an IP address finder app in ReactJS ?
Article Contributed By : 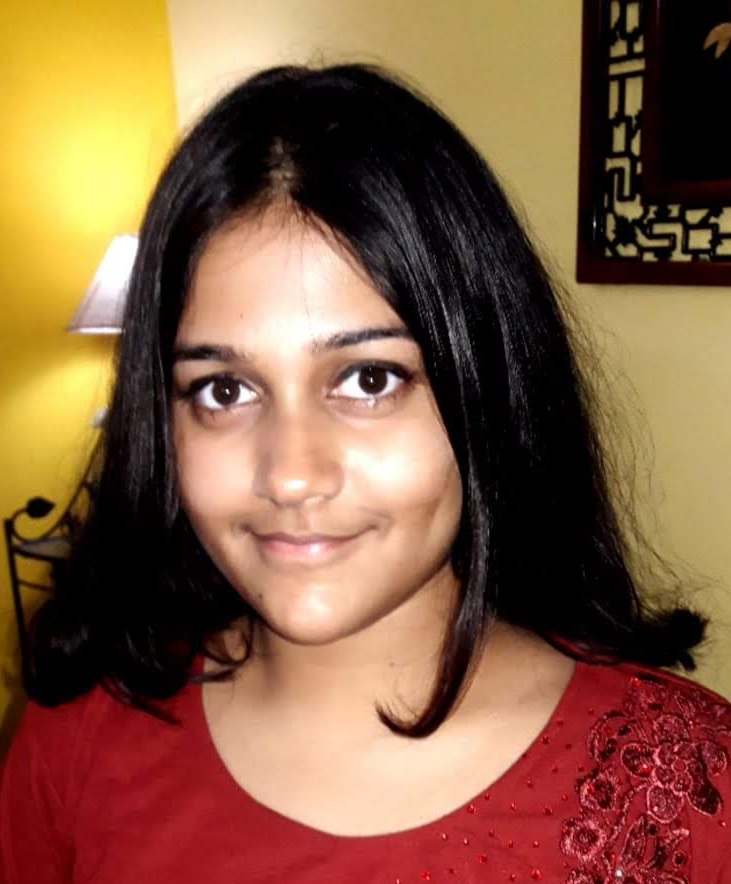