What is a Cryptographic Hash?

What is Hash Pointer?

A regular pointer stores the memory address of data. With this pointer, the data can be accessed easily. On the other hand, a hash pointer is a pointer to where data is stored and with the pointer, the cryptographic hash of the data is also stored. So a hash pointer points to the data and also allows us to verify the data. A hash pointer can be used to build all kinds of data structures such as blockchain and Merkle tree. 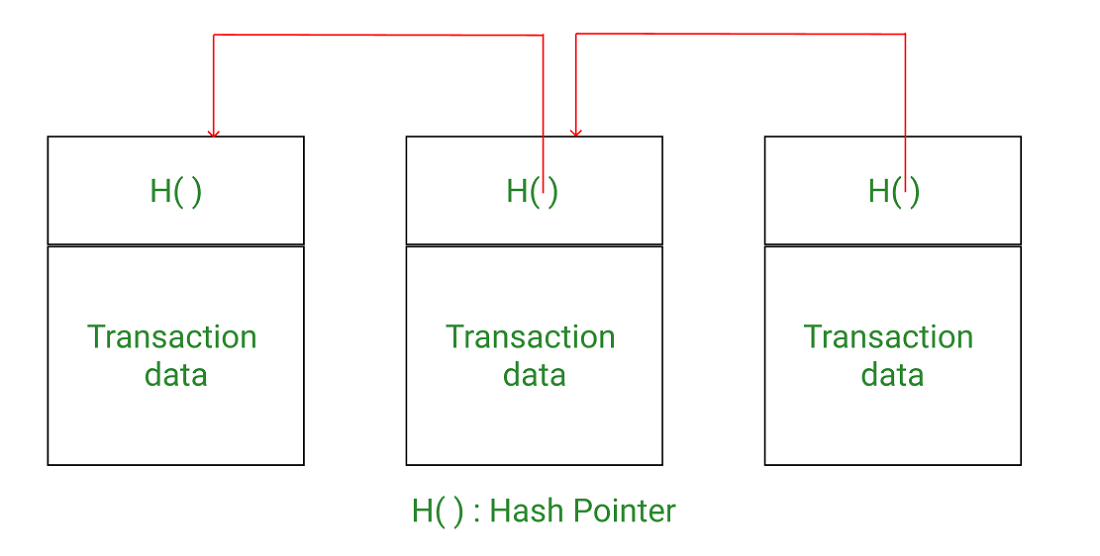 2. Merkle tree: A Merkle tree is a binary tree formed by hash pointers, and named after its creator, Ralph Merkle. 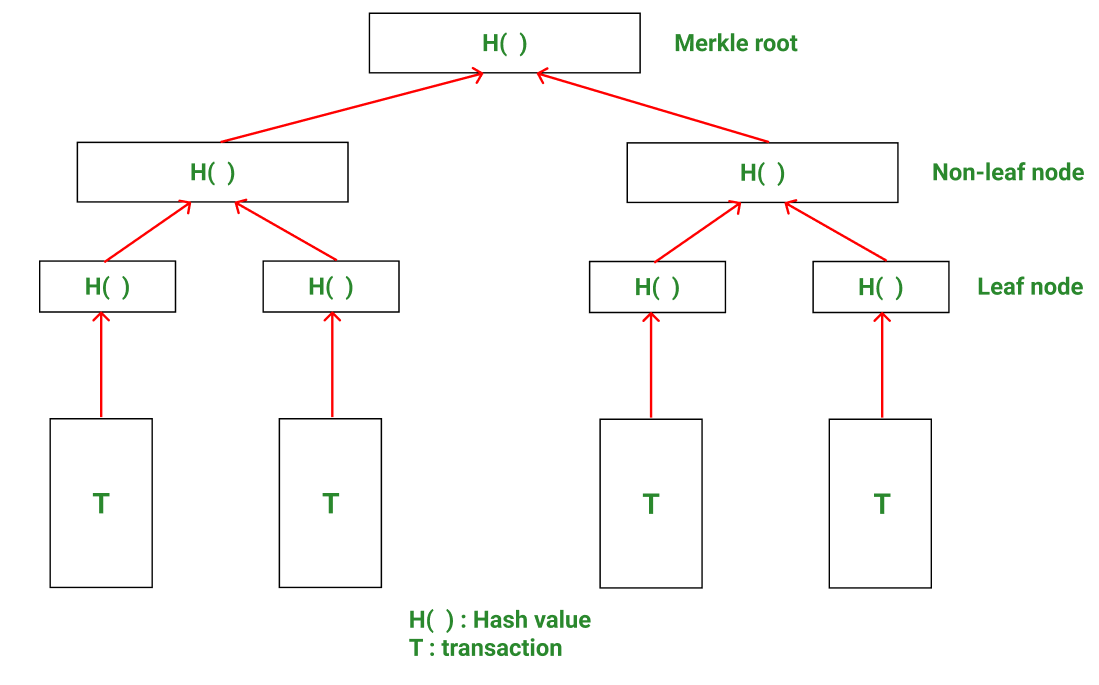 1. A blockchain can potentially have thousands of blocks with thousands of transactions in each block. Therefore, memory space and computing power are two main challenges.

2. It would be optimal to use as little data as possible for verifying transactions, which can reduce CPU processing and provide better security, and this is exactly what Merkle trees offer.

How Do Merkle Trees Work?

Example: Consider a block having 4 transactions- T1, T2, T3, T4. These four transactions have to be stored in the Merkle tree and this is done by the following steps-

Step 1: The hash of each transaction is computed.

Step 2: The hashes computed are stored in leaf nodes of the Merkle tree.

Step 3: Now non-leaf nodes will be formed. In order to form these nodes, leaf nodes will be paired together from left to right, and the hash of these pairs will be calculated. Firstly hash of H1 and H2 will be computed to form H12. Similarly, H34 is computed. Values H12 and H34 are parent nodes of H1, H2, and H3, H4 respectively. These are non-leaf nodes. 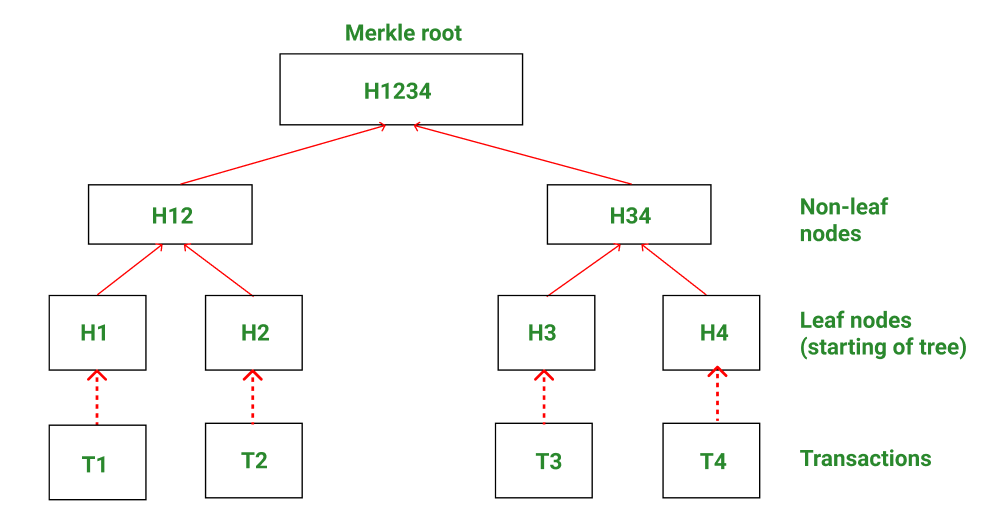 Merkle tree works by hashing child nodes again and again till only one hash remains.

Why Merkle Trees are Important For Blockchain?

A very interesting feature of the Merkle tree is that it provides proof of membership.

Example: A miner wants to prove that a particular transaction belongs to a Merkle tree Now the miner needs to present this transaction and all the nodes which lie on the path between the transaction and the root. The rest of the tree can be ignored because the hashes stored in the intermediate nodes are enough to verify the hashes all the way up to the root. 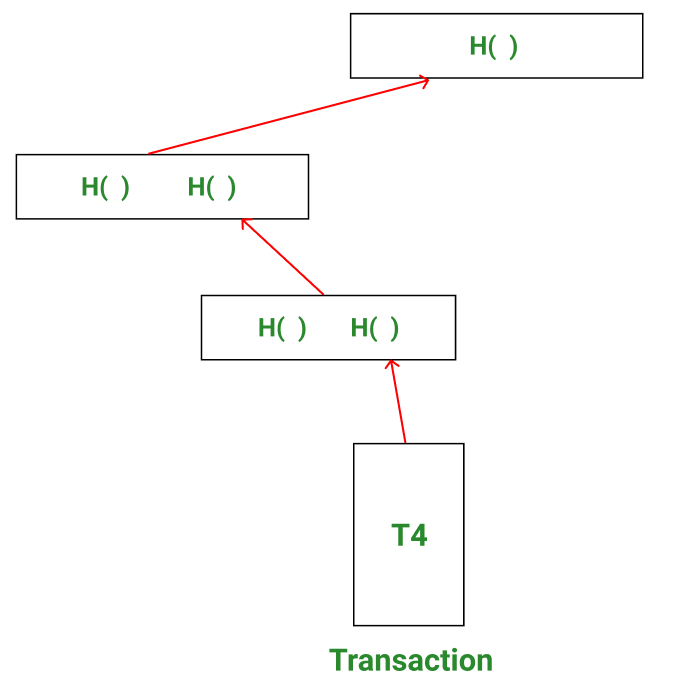 Proof of membership: verifying the presence of transactions in blocks using the Merkle tree.

If there are n nodes in the tree then only log(n) nodes need to be examined. Hence even if there are a large number of nodes in the Merkle tree, proof of membership can be computed in a relatively short time.

A Merkle proof is used to decide:

Merkle proofs are established by hashing a hash’s corresponding hash together and climbing up the tree until you obtain the root hash which is or can be publicly known.

Consider the Merkle tree given below:

Let us say we need to prove that transaction ‘a’ is part of this Merkle tree. Everyone in the network will be aware of the hash function used by all Merkle trees.

From the above example, it is clear that in order to verify the presence of ‘a’, ‘a’ does not have to be revealed nor do ‘b’, ‘c’, ‘d’ have to be revealed, only their hashes are sufficient. Therefore Merkle proof provides an efficient and simple method of verifying inclusivity, and is synonymous with “proof of inclusion”.
A sorted Merkle tree is a tree where all the data blocks are ordered using an ordering function. This ordering can be alphabetical, lexicographical, numerical, etc.

A coinbase transaction is a unique Bitcoin transaction that is included in the Merkle tree of every block in the blockchain. It is responsible for creating new coins and also consists of a coinbase parameter that can be used by miners to insert arbitrary data into the blockchain.