We’ve always heard the nursery rhyme Twinkle-Twinkle little star, but have you ever asked why stars twinkle at night? It is certain that everyone has seen the twinkling star at once in your life, but do you know when astronaut travel in space they are no longer to see stars twinkling in the sky, the only thing they can see is the beautiful lighted dots. So this makes one thing clear that the stars only twinkle or seem to twinkle from our earth but why? Well, this is due to our earth’s atmosphere which causes refraction and due to which star twinkles in the night. 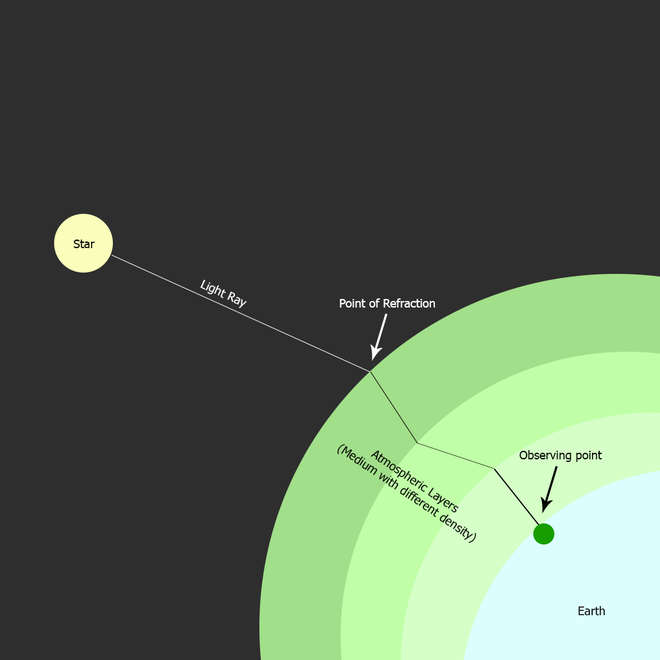 Twinkling of a star due to atmospheric refraction.

What is Refraction of Light?

Well, we all familiar with the reflection of light that when the light hits a polished surface then it bounces back and this phenomenon is known as reflection. But sometimes, the light bends when it passes from one medium to another, and this bending of light is known as refraction. Basically, the cause of refraction is due to the difference in optical density of the two mediums. 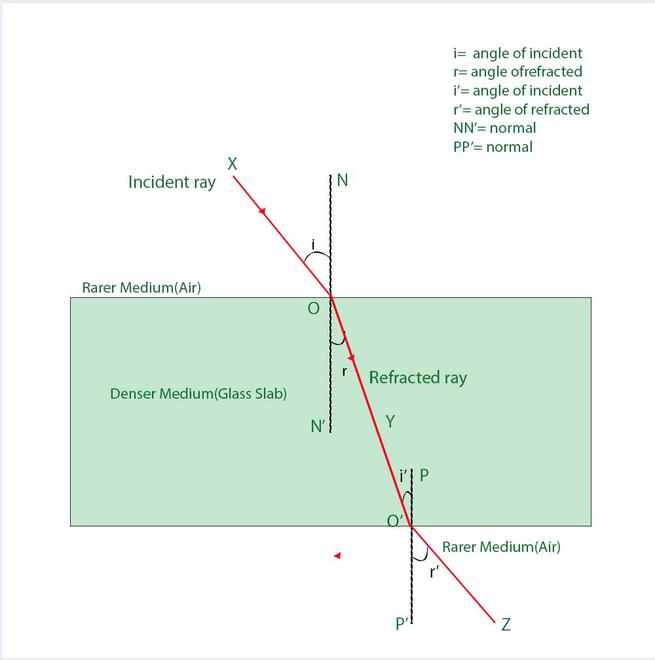 Refraction of light in a different medium

In the figure, one can easily understand refraction, firstly the light travels in the air (optical rarer medium) and the moment it strikes the glass slab, it bends as it enters into an optically denser medium.

This theory is quite different from what we have studied about light, in that it always travels in a straight direction. So why does the light refract Well, the main cause of refraction is the speed of the light. Basically, light travels at different speeds in different media. Thus, when the light travels from one medium to another medium then at that point it faces a change in speed. Now it is known whenever light moves from one medium to another then its speed gets alter which causes refraction. Let’s discuss what happens when light enters from air to the glass slab, and then it comes out from the glass slab.

This can be understood that why the speed of light is different in a different medium, by understanding a simple analogy. Suppose you have two pools, one, which is full of water and the other one, which is full of honey. So, tell me in which pool you can swim easily? Of course water, it is less dense than the honey pool.  Now apply the same analogy to light, so when it travels in a rarer medium then it travels with more speed than in a denser medium.

When a beam of light travels from two medium then it follows two laws of refraction:

In this section, we try to understand why does the stars twinkle in the night? Are we seeing stars at correct positions?  And let me tell you one more interesting fact, we see the sun 2 min before sunrise. This is quite interesting but why? So we are going to answer these questions in this section.  As we all now aware of the term refraction and the cause of refraction. So let’s understand atmosphere refraction.

In short, the refraction cause due to the earth’s atmosphere is called atmospheric refraction.

Problem 1: Explain why stars seem higher than their actual position?

Problem 2: Why only stars twinkle in the night but not the planet?

Problem 3: By how much atmosphere refraction causes a delay in the sunset and early sunrise?

Problem 4: Explain why the object seems moving if we look at the object through the hot air over the fire?

This is because of the refraction of light, as the hot air above the fire behave as rarer medium and the colder air further above the hot air behaves as an optically denser medium,  hence refraction takes place and the object seems shaky or moving.

Following are the application of atmospheric refraction:

Problem 6: We know that when light moves from one medium to another causes refraction. Now our atmosphere covers with air only so how does light refract in one medium? Explain in brief.