Acetone is a colorless liquid used in the production of plastics and other industrial products. Acetone formula (or Propanone) is given here both in organic form and in structural form, Acetone is the smallest and the simplest Ketone which is a flammable, colorless, and volatile liquid.

The chemical formula of Acetone is C3H6O which is also known as propanone. Acetone is found in the exhaust from vehicles, plants, trees, and forest fires.

It is also found in the urine and blood of the human body. Acetone is miscible in water, ether, ethanol and has a pungent, floral, or irritating smell. It is highly used as an antiseptic and solvent. Alchemists were the first to produce acetone and It is produced with the dry distillation of metal acetates. It is produced by propylene either by the direct or indirect method or we can say almost 83% of acetone is produced during the cumene process.

The chemical formula of Acetone consists of three carbon atoms, six hydrogen atoms, and one oxygen atom. It is considered as a ketone since there is a carbonyl group present in it. It is mainly used in medicine and in cosmetics. Acetone is mainly present in blood and urine. It is also an active ingredient in nail polish removers. 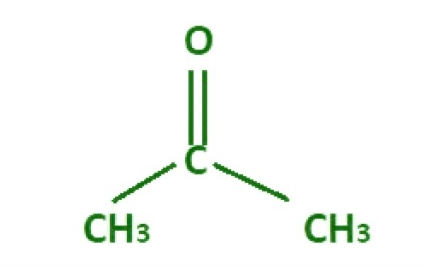 In Industry 83% of acetone is produced by the cumene process. In this process, benzene is alkylated with propylene to produce cumene, which is oxidized by air to produce phenol and acetone.

Acetone C3H6O naturally occurs in plants, trees, volcanic gases, forest fires, and as a product of the breakdown of body fat. It is also found in urine and blood, while the concentration may be higher in diabetic patients. We can find traces of it in vehicle exhaust, tobacco smoke, and landfill sites. It is also found among the many products formed in the destructive distillation of materials like wood, sugar, cellulose, etc.

Question 1: Explain the uses of Acetone?

Acetone is highly used as an industrial solvent. Acetone also serves as a precursor to methyl methacrylate. This process initiate with the conversion of acetone into acetone cyanohydrin.

It is a powerful solvent that is used as nail polish remover. Acetone is also effective for oil removal and preparing nail polish.

Intake of acetone from moderate to high amounts of acetone for a short amount of time can irritate your nose, throat, lungs and eyes and also cause headaches, a faster pulse. some other causes are nausea, effects on the blood, passing out and possible coma, and a shorter menstrual cycle in women.

Question 3: Is acetone a better solvent than water?

Question 4: What is the chemical name and formula of Acetone? where acetone occurs?

The chemical formula of Acetone is C3H6O which is also known as propanone. It naturally occurs in plants, trees, volcanic gases, forest fires, and as a product of the breakdown of body fat. It is also found in urine and blood, while the concentration may be higher in diabetic patients. We can find the traces of it in vehicle exhaust, tobacco smoke, and landfill sites.

Question 5: Why Acetone is heavier than water?

The density of acetone at room temperature is 0.788g/mL and which shows that per milliliter of liquid has a mass of 0.788 grams.

Question 6: How Acetone is helpful in electronics?

It is highly combustible, on the other hand It is a important substance that has been used to clean electronic equipment and gadgets. It is work as a solvent in many of the electronic devices as well as work as a cleansers.

Question 7: Give two advantages and disadvantages of Acetone?

Advantages of acetone are:

Disadvantages of acetone are: