A metal is a material that has a glossy appearance when freshly produced, polished, or shattered, and conducts electricity and heat reasonably well. Metals are either malleable or ductile (they may be hammered into thin sheets) (can be drawn into wires). Metals can be chemical elements like iron, alloys like stainless steel, or molecular compounds like polymeric sulphur nitride.

The term “metal” is used more broadly in astrophysics to refer to all chemical elements in a star that are heavier than helium, rather than just classical metals. In this sense, the first four “metals” that accumulate in star cores through nucleosynthesis are carbon, nitrogen, oxygen, and neon, which are all chemically non-metals. Over the course of its existence, a star fuses lighter elements, primarily hydrogen and helium, into heavier atoms. In this context, an astronomical object’s metallicity refers to the proportion of its mass made up of heavier chemical elements.

Rusting of iron and steel is the most prevalent example of metallic corrosion. Rusting of exhaust systems and vehicle bodywork, water pipes, and many sorts of structural steelwork are all well-known instances. The combined action of air and water on iron causes it to rust. Rusting does not happen in fully dry air or in the air that is completely devoid of water. Atmospheric conditions and the relative contributions of the components that regulate rusting define the particular composition of the rust. It is primarily composed of hydrated ferric oxide, so the chemical formula of rust is Fe2O3.xH2O .The following response can roughly characterise its formation:

The outer surface of iron rusts first in the presence of wet air, and a layer of hydrated ferric oxide (rust) is deposited on the surface. This layer is delicate and porous, and if it becomes too thick, it may fall off. The lowest layers of iron are exposed to the environment, causing them to rust. Iron eventually loses its strength as the process continues.

What is the process of Rusting of Iron?

Iron rusting is an oxidation reaction. During rusting, iron combines with oxygen in the air in the presence of water to generate Fe2O3.xH2O, a hydrated iron (III) oxide.

This hydrated iron (Ill) oxide is referred to as rust. Rust is largely hydrated iron (III) oxide, Fe2O3.xH2O, as a result. The colour of rust is reddish-brown. We’ve all noticed reddish-brown rust on iron nails, screws, pipes, and railings. When exposed to wet air, not just iron, but also steel, rusts. Steel, on the other hand, is more resistant to rust than iron.

Rusting of Iron is a Chemical Change

Rust is formed when iron (or an alloy of iron) is exposed to oxygen in the presence of moisture. This reaction is not instantaneous; rather, it takes place over a long period of time. Iron oxides are formed when oxygen atoms combine with iron atoms. The bonds between the iron atoms in the object/structure are weakened as a result.

Iron is a reducing agent, but oxygen is an excellent oxidising agent. When exposed to oxygen, the iron atom easily gives away electrons. The chemical reaction is described as follows:

When water is present, the oxygen atom increases the oxidation state of iron.

The direct reaction between the iron cations and the hydroxide ions also produces iron hydroxides.

The iron hydroxides that result are now dehydrated, yielding the iron oxides that makeup rust. Many chemical processes are involved in this process, some of which are given below.

All of the chemical reactions listed above have one thing in common: they all require the presence of water and oxygen. As a result, the amount of oxygen and water surrounding the metal can be limited to prevent rusting.

The Conditions Necessary for Rusting of Iron are:

Many factors contribute to the rusting of iron, including the amount of moisture in the air and the pH of the surrounding environment. The following are a few of these elements.

The size of the iron object can also influence how quickly it rusts. A huge iron object, for example, is likely to have minor flaws due to the smelting process. These flaws provide a platform for environmental attacks on the metal.

Experiment to Prove that Air and Moisture are Essential for Rusting:

Procedure to demonstrate that rusting requires moisture and air. 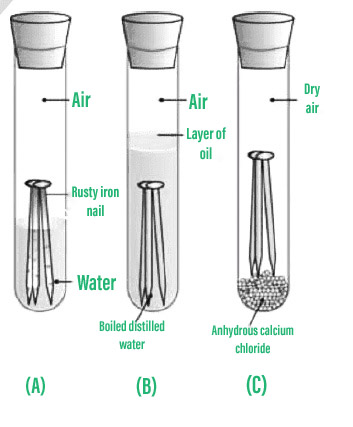 Conclusion: This experiment demonstrates that rusting requires both air (oxygen) and moisture to occur.

What are the damages caused by Rusting of Iron objects?

Rust is permeable and soft, and as it slips off the surface of a rusty iron object, the iron beneath rusts. As a result, iron rust is a constant process that eats away at iron items over time, rendering them worthless. Rusting of iron causes significant damage over time since it is used to build a wide range of structures and commodities, including bridges, grills, railings, gates, and the bodies of cars, buses, trucks, and ships. It goes without saying that we should have a way to keep iron from rusting.

Prevention of Rusting of Iron

The loss of iron objects due to rusting has a huge economic impact on the country, and it must be avoided. To keep iron things from rusting, a variety of techniques are employed. To keep air and water out, the majority of the ways require covering the iron piece with something. The following are some of the most prevalent ways to keep iron from rusting:

Question 1: What is the process of rusting iron?

Question 2: What is rusting of iron called?

Question 3:  How rusting of iron can be prevented?

Rusting of iron can be prevented by

Question 4: What is rust? Give the equation for the formation of rust?

When iron is exposed to air for an extended period of time, it oxidises and develops a reddish-brown iron oxide on the surface. Rust is the name for this reddish-brown material.

Rust is formed via the following equation:

Rust is permeable and soft, and as it slips off the surface of a rusty iron object, the iron beneath rusts. As a result, iron rust is a constant process that eats away at iron items over time, rendering them worthless. Rusting of iron causes significant damage over time since it is used to build a wide range of structures and commodities, including bridges, grills, railings, gates, and the bodies of cars, buses, trucks, and ships. It goes without saying that we should have a way to keep iron from rusting.

Question 6: What are the conditions necessary for rusting?

Many factors contribute to the rusting of iron, including the amount of moisture in the air and the pH of the surrounding environment. The following are a few of these elements.

Question 7: How does rust of iron be a chemical change?

Rust is made up of iron oxide (Fe2O3). As a result, rust and iron are not synonymous. Rust isn’t the same thing as the iron it’s deposited on. Because a new component termed “iron oxide” is created during the rusting of iron, it represents a chemical change.