Imagine you are a tourist in a country and your local guide is a robot. Or you are watching the early morning news and the presenter is a robot. Or even the customer service agent at your nearest phone help center is also a robot!!! This is not a dream or the distant future but current reality!

In this age of innovation and technology, more and more companies are creating extremely human-looking robots that will work closely with actual humans in the hospitality or customer service sectors. So it is obvious that these robots are created to look like humans as much as possible and even behave like humans. And while you are still able to recognize them as robots in present times, there may even come a time in the future when you think you are talking to a human that turns out to be a robot! But for now, let’s see the top 5 humanoid robots in the world in current times. These robots look exactly like humans and while their behavior still needs some improvement to completely resemble a human, this may change in the future with increasing advances in Artificial Intelligence. 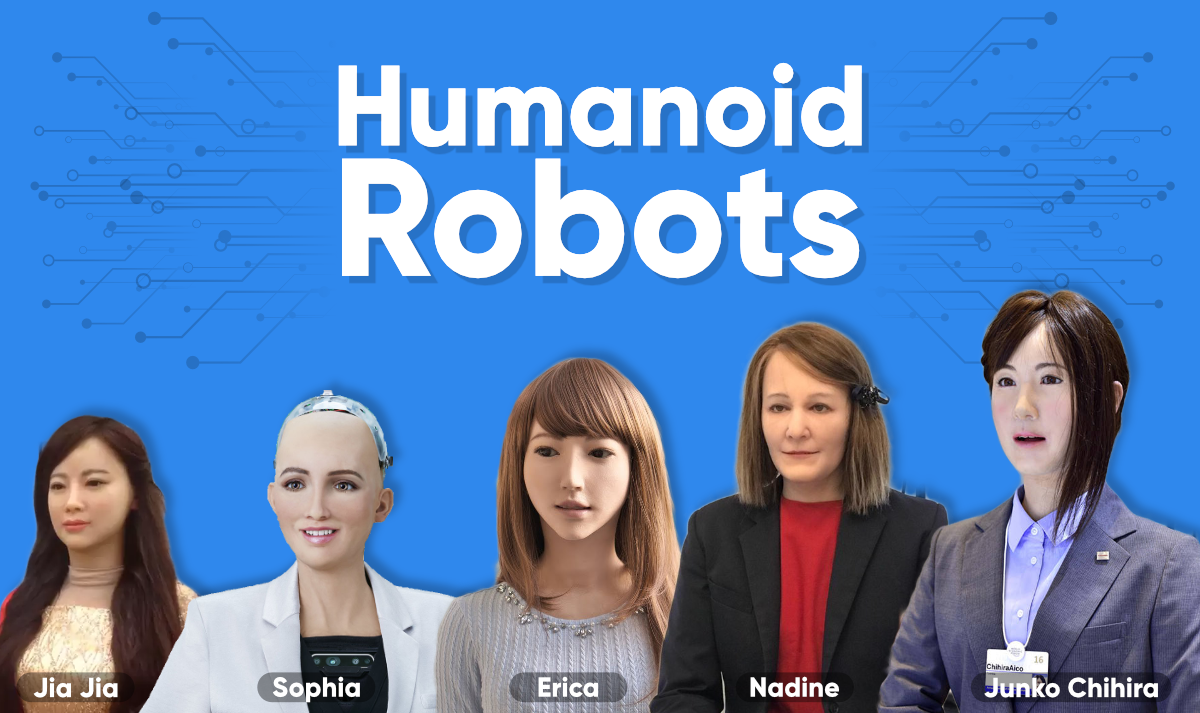 Imagine you are talking to a customer service agent. Obviously, you assumed that this agent is a human being. Well, your assumption might be wrong!!! You could be talking to Nadine, which is the most humanoid robot in the world! And you could be forgiven for thinking that Nadine is a human as she has a human-looking body with lifelike features. She can even recognize you from previous visits, make eye contact, shake your hand, continue chatting based on previous meetings, etc. Nadine was developed by Kokoro Japan with her software platform developed at the Nanyang Technological University in Singapore. She is currently working as a customer service agent at AIA Singapore (an insurance company).

Nadine was developed using cutting edge robotics technology to simulate human behavior. She has 3D depths cameras, a microphone, and a webcam to gather visual and audio inputs. Then there are various perception layers that process these inputs to recognize different faces, gestures, emotions, behavior, etc. and then respond accordingly. Nadine also had inbuilt chatbots that allow her to handle different queries and a memory model that remembers different users and conversations with them. In addition to all this, Nadine can also converse in 6 languages, namely English, German, French, Chinese, Hindi, and Japanese. So you won’t have any problems talking to her!!!

Did you think only humans could obtain citizenship in a country? Well, that’s not true now! Sophia, a humanoid robot developed by Hong Kong based company Hanson Robotics, was the first robot ever to be given citizenship of any country. Sofia is now officially a Saudi Arab citizen!!! And she is an extremely popular robot! She was developed to look like Audrey Hepburn, a famous Hollywood actress and has appeared in various interviews with the United Nations, Tonight Show with Jimmy Fallon in America, British Broadcasting Company, etc. Mr. Hanson, the creator of Sophia believes that she will be a perfect fit as an old age companion in nursing homes, a crowd manager in large events or parks, etc. In short, he hopes Sophia can ultimately gain enough social skills to interact convincingly with human beings.

When you watch the news, you get to know the latest updates from the news anchor. But now, that news anchor might be a robot! If you are in Japan, you might be getting your daily news from Erica, a Japanese robot. Erica was created by Hiroshi Ishiguro, the director of the Intelligent Robotics Laboratory at Osaka University. She is one of the most intelligent humanoids developed in Japan with a special emphasis on her speech capabilities. And while Erica cannot walk, she can easily interact with human beings and change her facial expressions according to the conversation.

This is possible for Erica because of the 15 inbuilt infrared sensors in her “eyes” that can track any movement. She also has speech-generation algorithms and facial recognition technology that makes it easy to track different faces in a room. Erica has inbuilt forty-four degrees of freedom that allow her to face, neck, waist and exhibit various facial expressions. And while she is unable to move her arms yet, it is not that big of a problem as she is working as a news anchor. Also, Hiroshi Ishiguro seems to think Erica has a “soul” but that is a question that creates a debate more on robotic metaphysics and less on technology.

Suppose you are a tourist in Japan and want some answers from the local tourist information center. Chances are that your queries could be answered by Junko Chihira, a humanoid robot working in Aqua City Odaiba, a shopping center on Tokyo’s waterfront. She is a humanoid robot developed by Toshiba using the technology created by Hiroshi Ishiguro, a robotics researcher at Osaka. Junko Chihira has incredible interaction skills and a wide range of facial expressions. She can also greet tourists in Japanese, English, and Chinese which makes communication much easier. Junko is also programmed with sign language to help hearing-impaired tourists.

Toshiba has used various advancements in Artificial Intelligence to create Junko Chihira. She is embedded with speech synthesis technology and natural language processing which means she can understand and answer tourist questions correctly. Junko Chihira also has an advanced version, Kanae Chihira, which can be can be programmed to speak any language. Kanae Chihira has much smoother movements and intelligence capabilities as she was developed specifically for the tourism and travel industry.

Guess who is called the Robot Goddess of China?! Its Jia Jia, a humanoid robot developed by a team from the University of Science and Technology of China. Jia Jia is considered the most beautiful woman in China and this effect is only increased by the fact that she can talk to people and reply accordingly. While her speech patterns are still not smooth enough, Jia Jia makes up for it by looking remarkably human-like because of her eye movements and speech-lip synchronization. However, a weird thing is that she addresses her creators as “my lord”, which might just be a Chinese cultural addition!!!

Jia Jia has such realistic expressions as special emphasis was given to her “eyes” so that she can catch different gestures, emotions, behavior, etc. and then respond accordingly. She also has speech-generation algorithms that allow her to hold a conversation with humans and facial recognition technology that makes it easy to track different faces in a room. Using these technologies, Jia Jia was even able to tell when photographers were taking unflattering pictures, and telling them not to make her face look fat on the camera. And so, creators of Jia Jia hope that with time, her interactions will gradually become even more “human” and less robot-like.