Zinc is a chemical element with the symbol Zn and its atomic number is 30. It is not found in its element form instead it is found as minerals with other chemical elements. It is an essential trace element in the human body where it is found in high concentrations of red blood cells. It is a widely used metal. Zinc is mostly used for galvanizing other metals in order to protect them from rusting. Zinc metal is used for manufacturing like creating roofing materials or making zinc oxide.

Nitrogen is a chemical element with the symbol N. Its atomic number is 7 and its electron configuration is 1s2 2s2 2p3. It is the seventh element of the periodic table. It’s an important part of amino acids. It is one of the most familiar substances on earth. It is an essential element for all forms of life and is the fourth most abundant element in the living biomass after hydrogen, carbon, and oxygen. It is used to make fertilizers, nitric acid, nylon, dyes, and explosives.

Zinc Nitrate is an inorganic chemical compound with the formula Zn(NO3)2. It is a colorless crystalline solid. It is used as a catalyst in resin production, manufacture of chemicals, and manufacture of medicines. It is used in the laboratory for the synthesis of coordination polymers. Nitrate compounds are mostly soluble in water. It is usually formed by dissolving zinc in nitric acid.

On heating, it undergoes thermal decomposition to form zinc oxide and oxygen 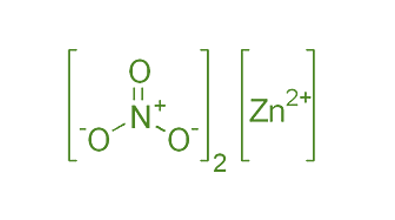 Question 1: What are the organisms that need nitrogen to survive?

Question 2: Is Zinc Nitrate acid or base?

Zinc Nitrate is acidic. Hydroxide anions coming from water can liberate the nitrate anions when zinc nitrate is put in an aqueous solution. HNO3 doesn’t look like a molecule. The reaction results in the formation of hydronium ions which is why the solution can be considered acidic.

Question 3: Does zinc nitrate have low or high solubility?

Question 4: What are the uses of zinc?

Zinc is a chemical element with the symbol Zn. The major uses of zinc metal are in galvanizing iron and steel against corrosion and in making brasses and alloy for die casting. Its uses range from metal products to rubber and medicines. The zinc sources are grains, Oysters, red meat, poultry, and milk products.

Question 5: What happens when zinc reacts with zinc nitrate?

Zinc leads to the formation of zinc nitrate with silver nitrate and provides silver as a byproduct during or at the end of the process. The process happens since zinc, which leads to zinc nitrate, is much more reactive than silver, and this, in turn, creates silver.

Question 6: What is oxygen and what are the uses of oxygen?

Oxygen is a chemical element with the symbol O. It is used by every living being for breathing. It is very useful for industries. It is used medically for oxygen tents, inhalators, and pediatric incubators. It is also used as an oxidant. Oxygen gas is used for oxy acetylene welding and cutting metals.

Question 7: Why zinc is a good electrode?

Zinc behaves as the anode of the galvanic cell and copper as the cathode. The zinc-nickel oxide cell has a number of important advantages in particular its high operating voltage and energy density, good high rate discharge characteristics, and low cost.