What is the Difference between Interactive and Script Mode in Python Programming?

Python is a programming language that lets you work quickly and integrate systems more efficiently. It is a widely-used general-purpose, high-level programming language. It was designed with an emphasis on code readability, and its syntax allows programmers to express their concepts in fewer lines of code. In the Python programming language, there are two ways in which we can run our code:

In this article, we’ll get to know what these modes are and how they differ from each other.

Interactive etymologically means “working simultaneously and creating impact of our work on the other’s work”. Interactive mode is based on this ideology only. In the interactive mode as we enter a command and press enter, the very next step we get the output. The output of the code in the interactive mode is influenced by the last command we give. Interactive mode is very convenient for writing very short lines of code. In python is it also known as REPL which stands for Read Evaluate Print Loop. Here, the read function reads the input from the user and stores it in memory. Eval function evaluates the input to get the desired output. Print function outputs the evaluated result. The loop function executes the loop during the execution of the entire program and terminates when our program ends. This mode is very suitable for beginners in programming as it helps them evaluate their code line by line and understand the execution of code well.

How to run python code in Interactive mode?

In order to run our program in the interactive mode, we can use command prompt in windows, terminal in Linux, and macOS. Let us see understand the execution of python code in the command prompt with the help of an example:

To run python in command prompt type “python”.  Then simply type the Python statement on >>> prompt. As we type and press enter we can see the output in the very next line. 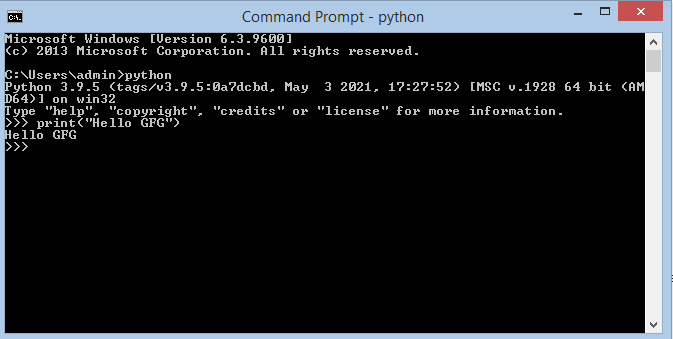 Let us take another example in which we need to perform addition on two numbers and we want to get its output. We will declare two variables a and b and store the result in a third variable c. We further print c. All this is done in the command prompt.

We can see the desired output on the screen. This kind of program is a very short program and can be easily executed in interactive mode.

In this example, we will multiply two numbers and take the numbers as an input for two users. You will see that when you execute the input command, you need to give input in the very next line, i.e. code is interpreted line by line. 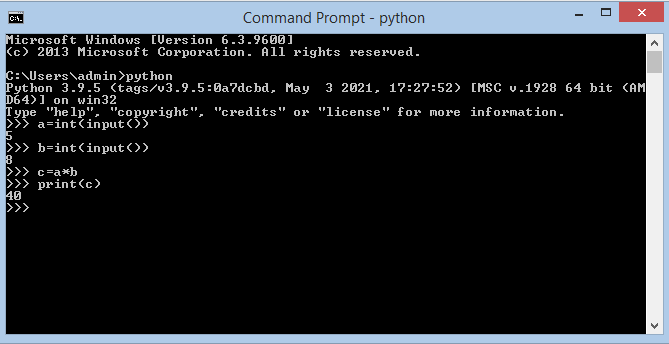 Script etymologically means a system of writing. In the script mode, a python program can be written in a file. This file can then be saved and executed using the command prompt. We can view the code at any time by opening the file and editing becomes quite easy as we can open and view the entire code as many times as we want. Script mode is very suitable for writing long pieces of code. It is much preferred over interactive mode by experts in the program. The file made in the script made is by default saved in the Python installation folder and the extension to save a python file is “.py”.

How to run python code in script mode?

In order to run a code in script mode follow the following steps.

Step 1: Make a file using a text editor. You can use any text editor of your choice(Here I use notepad).

Step 2: After writing the code save the file using “.py” extension.

Step 3: Now open the command prompt and command directory to the one where your file is stored.

Step 5: You will see the output on your command prompt.

Let us understand these steps with the help of the examples:

In order to execute “Hello gfg” using script mode we first make a file and save it.

Now we use the command prompt to execute this file. 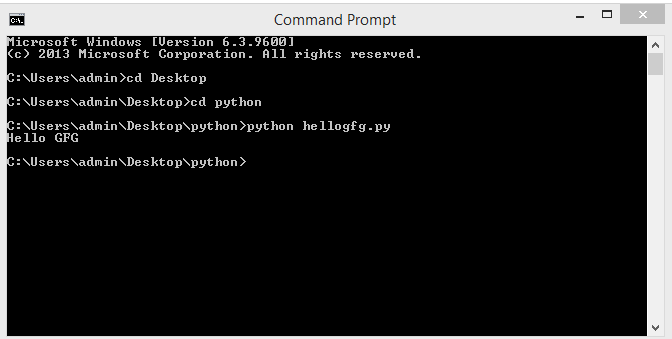 Our second example is the same addition of two numbers as we saw in the interactive mode. But in this case, we first make a file and write the entire code in that file. We then save it and execute it using the command prompt. 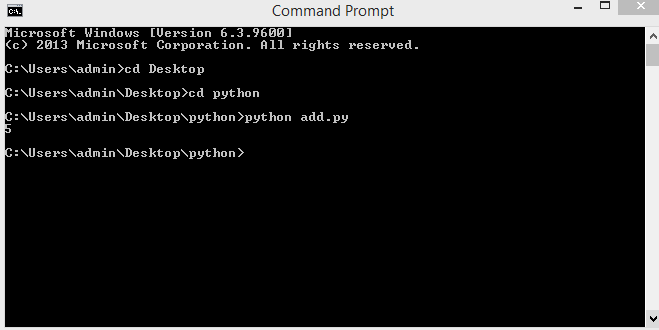 In this example, we write the code for multiplying two numbers. And the numbers which are to be multiplied are taken by the user as an input. In the interactive mode, we saw that as we write the command so does it asks for the input in the very next line. But in script mode we first code the entire program save and then run it in command prompt. The python interpreter executes the code line by line and gives us the result accordingly. 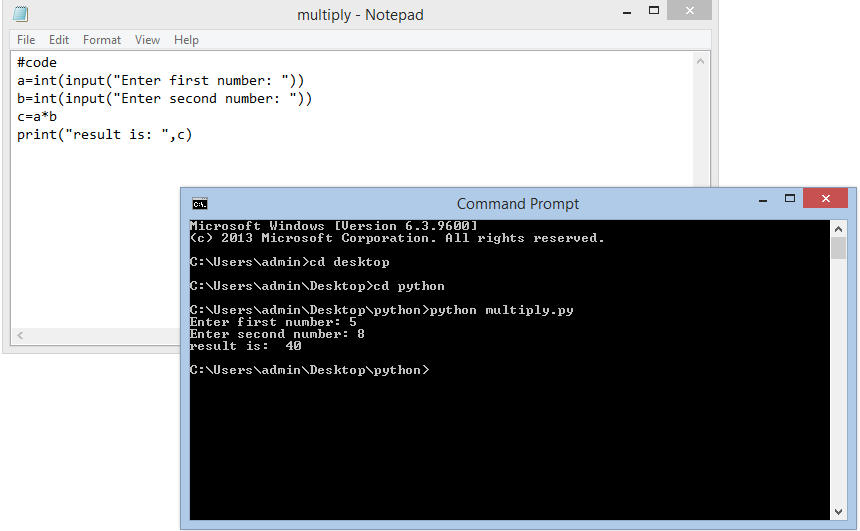 In this example, we see that the whole program is compiled and the code is executed line by line. The output on the shell is entirely different from the interactive mode.

My Personal Notes arrow_drop_up
Previous
How to find a rational number between 3 and 4?
Next
Sum of two numbers is 30 and their difference is 10. Find the numbers
Recommended Articles
Page :
How to Enable Shell Script Debugging Mode in Linux?
15, May 21
Create Interactive Dashboard in Python using Streamlit
25, Mar 21
Mean, Median and Mode in R Programming
17, Jun 20
Add Interactive Slider to Bokeh Plots
27, Jul 21
Make 3D interactive Matplotlib plot in Jupyter Notebook
27, Jul 21
Difference Between Mean, Median, and Mode with Examples
29, Oct 20
Shell Script to Show the Difference Between echo “$SHELL” and echo ‘$SHELL’
24, Mar 21
Difference between jQuery UI and script.aculo.us
12, Feb 21
Script in Scratch Programming
17, Jul 21
Mean, Median, Mode, and Range - Statistics | Class 9 Maths
28, Dec 20
Mean, Median and Mode of Grouped Data
04, Mar 21
CSS | writing-mode Property
24, Dec 18
CSS mix-blend-mode Property
28, Dec 18
What is SMPS(Switch Mode Power Supply)?
01, May 20
How to create mat-button-toggle-group as read only mode in AngularJS ?
27, Nov 20
How to Use Glances to Monitor Remote Linux in Web Server Mode?
07, May 21
How to calculate the mode of all rows or columns from a dataframe in R ?
27, May 21
How to Create Dark/Light Mode for Website using JavaScript/jQuery?
14, Feb 20
Mode
13, Dec 18
How to create Dark Mode in ReactJS using Material UI ?
18, Jul 21
How to Make Dark Mode for Websites using HTML CSS & JavaScript ?
21, Jul 21
How to tell ReactJS to build project in Production mode ?
27, Aug 21
CSS | background-blend-mode Property
27, Dec 18
How to calculate the mode of a Data Set?
20, Sep 21
Article Contributed By :