What is a Dicot Leaf?

If the plant is a dicotyledon, its leaves have unique characteristics. Externally, for example, unlike the leaves of monocotyledonous plants, there are midribs and have veins which would be different and would be on the leaf’s surface. 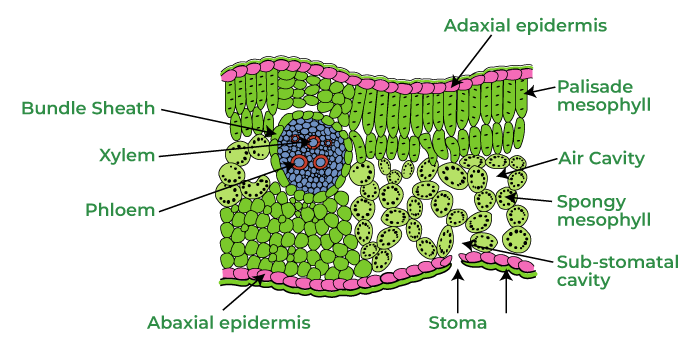 The layer which would be present outside resides on the leaves. This is a monolayer of parenchymal cells with no intercellular space. The outer wall of the cell is would be having a layer, which is known as a cuticle, and it is protective in nature.  This would have pores which are small in nature.

The layer present outside that lies beneath the leaves. This is a monolayer of parenchymal cells with no intercellular space. The outer wall of the cell is covered with a thin cuticle. There are quite a few pores in this layer. Chloroplasts are found only in bean-shaped guard cells surrounding the openings of the stomata. Pore, with the help of the lower epidermis;

Between the upper and lower epidermis is a mass of ground tissue called mesophyll. It consists of two different types of substance – Palisade Mesophyll and Spongy Mesophyll.

The cuticle, which can vary in thickness, covers the epidermis’ outer walls. It might have more wax layers. The Upper and lower epidermis are fully lined with parenchymatous cells. Although there is only one layer, young plants have stratified epidermis. Ficus elastica, for instance. Hairs in the epidermis can be glandular or non-glandular.

The mesophyll is composed of spongy parenchymal and palisade parenchymal.  Parenchymal which is palaside and also the chloroplast are located near the lower surface, while palisade parenchymal is located toward the higher surface. Sclereids of various types are also present in the mesophyll. An illustration would be the osteosclerosis, or rod-shaped stone cells, found between palisades on Hakea leaves. Some hydrophytes have sphaeraphides in their specialisation cells or sclereids which would be branched and their vast air spaces (Nymphaea). For instance, in Trapa bispinosa, the vascular bundles in the mid-rib are conjoint and collateral. While the xylem is located on the top side, the phloem is located on the lower side. There is only one vascular bundle in Nerium, Cannabis, Prunus, and other plants. Bulliform cells aren’t found in dicot leaves, although sunflower vitis and other plants have numerous vascular bundles.

Differences between the dicot and monocot leaf

Venation-Monocot exhibit parallels whereas in dicot we would see reticulated.

Space-In monocot spaces between cells is tighter as well as in dicot spaces would be larger.

It would exhibit the venation which would be parallel.

Question 2: Shape of the stomata in the dicot leaf?

It would exhibit shape in the form of the kidney.

The upper epidermis would be present outside and this would have pores.

Question 4: What Bundle sheath in the dicot leaf would be?

Bundle sheath would be of parenchymatous.

Vascular bundles present in the dicot leaf would be large in size.

It would be called a cuticle which would help in protection.