What is Hemoglobin? Definition, Structure and Function

Hemoglobin is a two-way respiratory transporter, carrying oxygen from the lungs to the tissues and working with the return carry of carbon dioxide. In the blood vessel circulation, hemoglobin has a high affinity for oxygen and a low affinity for carbon dioxide, natural phosphates, and hydrogen and chloride ions. In the venous circulation, these overall affinities are reversed.

Hemoglobin is a protein inside red blood cells that transports oxygen from the lungs to tissues and organs in the body and transports carbon dioxide back to the lungs. Testing for the level of hemoglobin count in the blood is generally a part of the Complete Blood Cell (CBC) test. 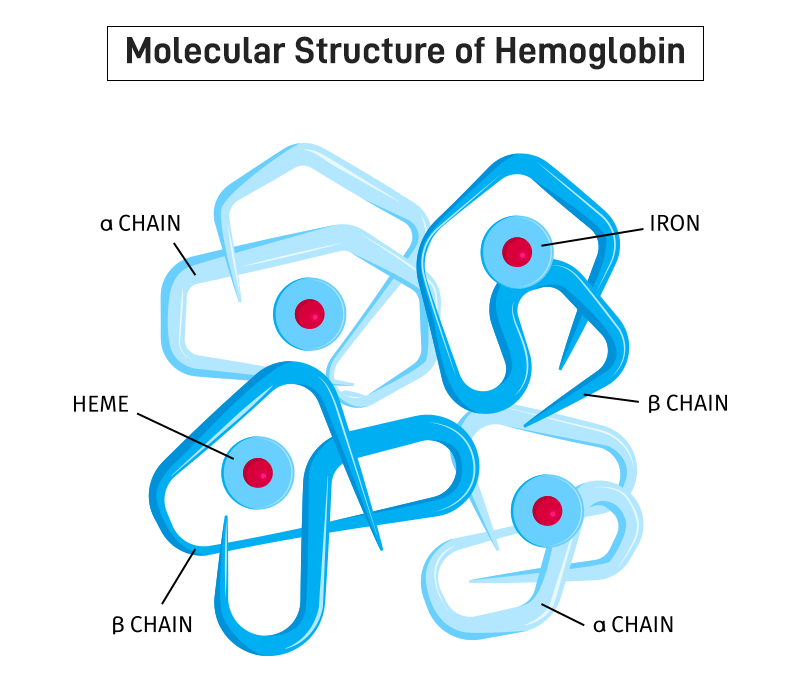 In the quaternary structure, there are areas of strength among α and β subunits. On gentle treatment with urea, hemoglobin to some degree separates, however, Alpha-Beta dimer stay intact. The subunits are held together by mostly hydrophobic interactions, hydrogen bonding, and a couple of ions or salt links.

In newborn children, there are 2 alpha and 2 gamma chains, which get reinstated by beta chains. 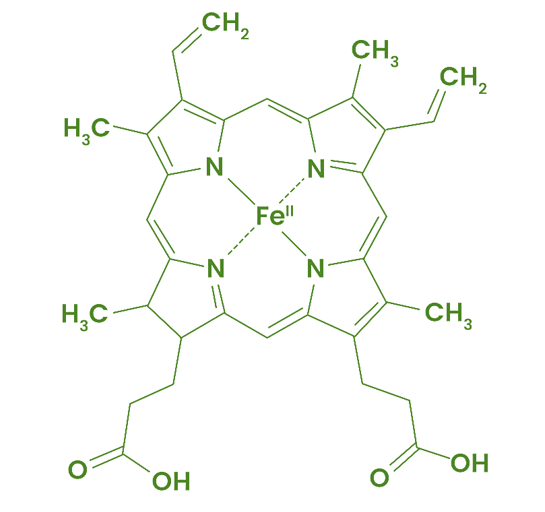 Hemoglobin is available in two conformities, for example, R state and T state.

Oxygen has less affinity to the T state than the R state. The T-state is the deoxy type of hemoglobin (implying that it comes up short on oxygen species) and is moreover known as Deoxyhemoglobin.

Oxygen has a greater affinity to the R state. The R-state is the oxy type of hemoglobin that is fully oxygenated and is also known as Oxyhemoglobin.

The principal function of Hemoglobin (Hb) is to carry and supply oxygen to different tissues. The binding of oxygen to Hb is helpful or Cooperative binding. The binding and arrival of oxygen from Hb in the lungs and tissues separately is because of the change between low oxygen affinity T state (Tense) and high oxygen liking R state (Relaxed).

The affinity of oxygen to Hb is impacted by pH, 2,3 BPG (2,3-Bisphosphoglyceric corrosive). Low pH, high BPG, and CO2 present in tissues favor T-state, and oxygen is delivered, while R-state is leaned toward the alveoli because of high, pH, low CO2, and BPG concentration, which prompts the binding of oxygen to Hb. Restricting of oxygen is likewise controlled by the partial pressure of oxygen. In the lungs where pO2 is high, oxygen, ties with Hb, and in tissues, where pO2 is low, oxygen is delivered.

Binding of the main oxygen molecule to the heme unit of one subunit of the deoxyhemoglobin (T- state) causes conformational changes prompting an expansion in the partiality, accordingly the second molecule binds more quickly. The limiting of the fourth molecule happens, when it is in the R state. The limiting of oxygen to Hb shows a sigmoid bend. This sort of restricting is known as allosteric binding, where binding at one site influences the affinities of the leftover binding sites.

The amount of oxygen levels in the blood is measured by Pulse Oximeter. It helps in diagnosing hypoxia. It depends on the fact that oxyhemoglobin and deoxyhemoglobin have different absorption spectra. This is a significant device that specialists are utilizing to check the oxygen saturation level of COVID-19  patients and furthermore in the people who are in danger.

Around 20-25% of CO2 is carried bound to hemoglobin as carbaminohemoglobin. In tissues where pCO2 is more and pO2 is less, restricting carbon dioxide is favored and in, alveoli separation of carbaminohemoglobin happens because of high pO2 and low pCO2. The rest of the CO2 is shipped as bicarbonate, which is worked with by an enzyme called carbonic anhydrase.

Hemoglobin likewise transports nitric oxide bound to the globin protein. It ties to the thiol groups present in the globin chains. Carbon monoxide can likewise bind to hemoglobin and structure the carboxyhemoglobin complex. Hemoglobin has a 250 times higher liking for carbon monoxide than oxygen. So even the smallest concentration of CO can influence the limiting of oxygen. Thus, rousing air wealth in CO can cause cerebral pain, unconsciousness, or even nausea. It can block 20% of active restricting sites of oxygen in chain smokers.

There can be different explanations behind hemoglobin inadequacy. Hemoglobin inadequacy prompts the lower oxygen-conveying limit of the blood. It tends to be because of nutritional inadequacy, kidney disorder, cancer, or any hereditary imperfections.

Greater than normal hemoglobin level is related to different heart and pulmonary illnesses.

Sickle cell Anemia: It is because of a deformity in the hemoglobin gene. There is a solitary nucleotide or point transformation in the beta-globin chain. ‘GAG’ gets changed over into ‘GTG’ prompting the substitution of glutamic acid by valine at the sixth position.

Thalassemia: It is caused because of less creation of hemoglobin. Thalassemia is of two types, Alpha-Thalassemia and Beta-Thalassemia. It is likewise caused because of damaged genes, and its seriousness relies heavily on the number of genes that are absent or defective. Hemoglobin level is ordinarily utilized as an indicative device. The HbA1c level, for example, glycosylated Hb or Hb connected with sugar is a marker for normal glucose level in the blood of a diabetic patient.

To summarize, hemoglobin is a fundamental color, which is expected for oxygen transport and to complete ordinary body capabilities.

Question 1: Mention any 3 types of Hemoglobin.

The 3 main types of Hemoglobin are:

Question 2: What is the normal level of hemoglobin?

Question 5: How does hemoglobin function?

Hemoglobin transports oxygen from the lungs to the various parts of our body through the blood.  Hemoglobin ties to four molecules of oxygen through cooperative restricting in the lungs where the fractional pressure of oxygen (pO2) is high and deliveries oxygen in the tissues where the partial strain of oxygen (pO2)  is low. Around 20-25% of CO2 is moved bound to hemoglobin as carbaminohemoglobin. In tissues where pCO2 is high, restricting carbon dioxide is leaned toward and in the lungs, separation of carbaminohemoglobin happens because of low pCO2.