Sodium is a highly reactive metal with the symbol Na. Its name comes from Latin, natrium. Sodium is a very soft silvery-white metal appearance with atomic number 11. It is a chemical element of the alkali metal group, Group 1 of the periodic table, with an atomic mass of 22.989u and a mass number of 23amu. Oxygen is a member of the chalcogen group in the periodic table. It is a highly reactive non-metal. It is a colorless, odorless gas that is essential to live organisms. The atomic weight of oxygen is 15.999 u. Oxygen is the chemical element with the symbol O and with the atomic number 8. Sulfate, also Sulphate, is an ion, a salt of sulfuric acid with a molar mass of 96.06 g/mol. Sulfate is soluble in water, divalent anion produced by the oxidation of elemental sulfur and organic sulfur. The empirical formula of sulfate is SO42-.

Sodium thiosulfate or sodium hyposulfite is a crystalline compound with five molecules of water in it. It is important because of its highly soluble nature, colorless and odorless. It is an inorganic salt, also referred to as disodium thiosulphate. The chemical formula of sodium thiosulfate is Na2S2O3, with a molar mass of 158.11 g/mol. It has many applications and various medical properties.

Na2S2O3 is the chemical formula of sodium thiosulfate. Na stands for sodium, S stands for sulfur, and the O stands for oxygen. It consists of two cations of a (Na+) sodium atom and an anion of (S2O3–) thiosulfate.

The central sulfur atom is bonded to three oxygen atoms and another sulfur atom in the structure. The solid form also exists in a monoclinic crystal structure. 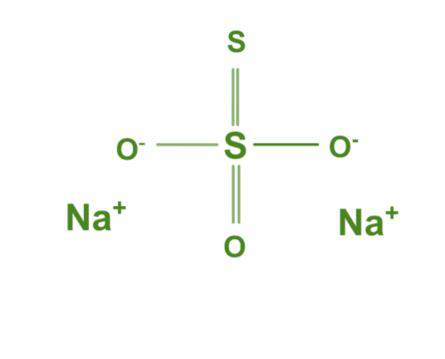 Under normal conditions, sodium thiosulfate is stable, but on heating, it decomposes to give sodium sulfate and sodium polysulfide,

Clock reaction, when treated with dilute acids, decomposes to give sulfur and sulfur dioxide,

As it is a neutral salt, it dissociates in water readily and produces sodium and thiosulfate ions,

When sodium thiosulfate decomposes, it produces fumes of toxic sulfur oxide, which cause irritation to the eyes, mucous membrane, and to skin.

Question 1: Why is sodium thiosulfate used in pools?

Sodium thiosulfate for pools eliminates free chlorine as well as joined chlorine from pools. It’s a simple, safe, and cheap method for adjusting the chemical levels in your pool. Sodium thiosulfate (Na2S2O3) can be utilized to kill or eliminate the remaining chlorine. It basically responds and shapes sodium hydrogen sulfate or sodium bisulfate which is a dormant salt.

Question 2: For what reason is sodium thiosulfate utilized in iodometric titration?

It responds stoichiometrically with aqueous solutions of iodine. Thus, it is generally utilized in laboratories, research centers for iodine-based titrations.
In an iodometric titration, a starch arrangement is utilized as an indicator since it can assimilate the I2 that is delivered. This absorption will make the solution change its tone from dark blue to light yellow when titrated with normalized thiosulfate solution. This shows the endpoint of the titration.

Salicylic corrosive is utilized to treat a contagious infection (fungal) of the skin, tinea versicolor. This medication might be utilized for different purposes. Salicylic acid assists your skin with retaining sodium thiosulfate. Salicylic acid and sodium thiosulfate effective is a mixed medication used to treat a skin problem (infection) called tinea versicolor.

Sodium thiosulfate is known as a cure in cyanide inebriation and has as of late been utilized for treating calciphylaxis.
It is remembered to have both cation-chelating and antioxidant properties. The reasoning for the utilization of sodium thiosulfate in calciphylaxis is the chelation of calcium to deliver calcium thiosulfate, which might be more solvent than other calcium salts and in this manner, all the more promptly cleared from the body.

Question 5: What is sodium thiosulfate utilized for?

Sodium thiosulfate is a modern compound that additionally has a long clinical history. It was initially utilized as an intravenous drug for metal harming. It has since been supported for the therapy of specific intriguing ailments. These incorporate cyanide poisoning, calciphylaxis, and cisplatin poisonousness. Thiosulphate is found in onions, shallots, chives, and onion powder. It’s particularly strong in garlic.

Question 6: Could sodium thiosulfate hurt you?

Hypertension or kidney infection, Liver sickness, or Toxanemia of pregnancy. Sodium thiosulfate may make the body hold water, which might aggravate these circumstances. Sodium thiosulfate decomposes it produces fumes of toxic sulfur oxide, which cause irritation to eyes, mucous membrane and to skin. Symptoms of sodium thiosulfate include: Low circulatory strain (hypotension), Nausea/spewing, Disorientation.

Question 7: What are the medical uses of sodium thiosulfate?

Sodium thiosulfate (STS) has been endorsed to treat a few rare, uncommon medical conditions, including cyanide poisoning, calciphylaxis, and cisplatin toxicity. It is an anti-inflammatory and neuroprotective agent. Therefore, it has potential for treating neurodegenerative diseases such as Alzheimer’s disease and Parkinson’s disease.