So in this very quick tutorial, let’s learn about the basics of the mighty OpenGL-powered SFML Graphics Library.

Simply put SFML is a multimedia library for C++ with bindings available for other languages such as Python, Rust, etc. It does not just let you use hardware-accelerated 2D Graphics with OpenGL but also has a variety of methods related to different types of media such as fonts, audio, etc. It stands for Simple and Fast Multimedia Library. Well, how simple is it? So simple that you could get a snake game running in less than 15 minutes. How fast is it? It’s so fast that you’d be running the application at several thousand frames per second.

Where is SFML used?

SFML is used heavily in making games and even game engines. And even though SFML doesn’t support 3D rendering yet it is used for context creation. Since OpenGL can’t create a window, 3D graphics programmers use SFML (at least most of the time) for the task.

Before we program in SFML we must set up the environment! Hopefully, it’s not a much of a headache especially not if you are in Linux! Debian Linux users (and any other flavour of Linux with apt/apt-get) can install SFML with the following command:-

Getting started with SFML

Here’s the most basic SFML application you’ll ever find:

Now to compile the program – since SFML is a dynamically linked library one needs to link the program to the library. This step depends on what component of SFML one is using. Since we are using Graphics.hpp we say:-

Assuming the source filename you used main.cpp! The step will be different if someone uses Visual Studio. You can refer here to see how to compile a SFML project with Visual Studio. Now once you run the program you may notice that the window is created but it vanishes automatically. This is because our driver function main creates a window and once it is created it moves to the second statement which is return 0; and hence exits the program! So what we need is a basic loop that will keep running as long as the user doesn’t close the window. So let’s refactor our code and this time understand line-by-line what is actually going on:

Before running the program let’s understand what’s going on! Explanation

Note that closing the window doesn’t terminate the program! But since our window is now closed the isOpen method will now return false and we will return out of what’s called – the main loop of the program! Now if you run the program you get a weird looking window (as shown below). 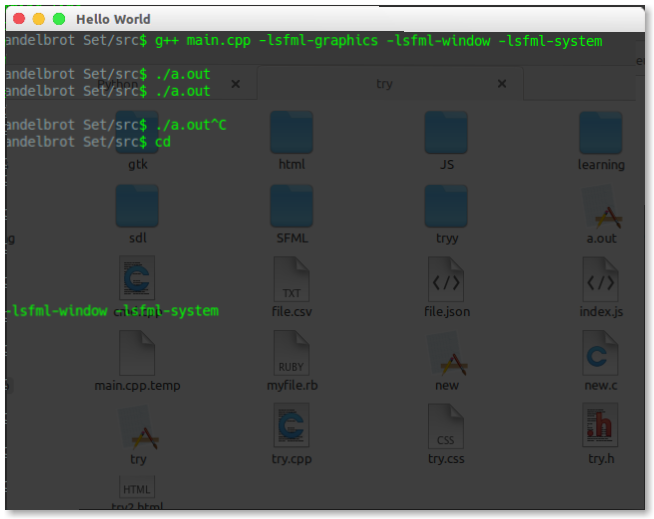 Sure you can close it but it looks weird, the previous contents of the screen are mapped to it and look super weird. This is happening because we are not clearing the window!! In the next example, we are going to do just that (clearing the window) and also draw shapes to the screen? Sounds fun! Let’s get started-

SFML is not all about window-creation (even though many people use it only for that). It can be used to render hardware-accelerated graphics (including some basic as well as complex shapes). In this example, we’ll constrain ourselves to draw a basic shape (a circle):-

This would produce the following output:- 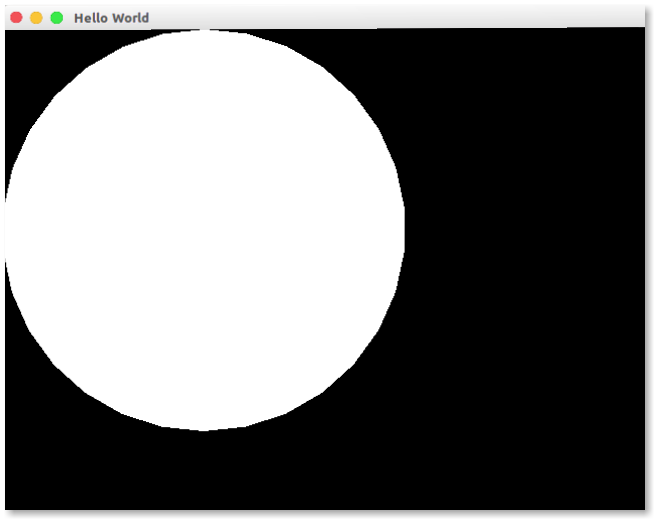 The advantages of SFML over other multimedia libraries are:-

There are also some disadvantages of SFML that come along the way:-

Now I’d end this article. I hope you learned a thing or to. Here are some books that you can read to learn more in SFML

Of course the original sfml wiki is charm, you can refer there as well. Also the people at the forums are very helpful and will gladly help you if you have any doubt. I wish you good luck in your journey of learning SFML. You can also read more about the dynamic libraries (and in what aspect do they differ from their static counterparts) in this post