Ruby is a object-oriented, reflective, general-purpose, dynamic programming language. Ruby was developed to make it act as a sensible buffer between human programmers and the underlying computing machinery. It is an interpreted scripting language which means most of its implementations execute instructions directly and freely, without previously compiling a program into machine-language instructions. Ruby is used to create web applications of different sorts. It is one of the hot technology at present to create web applications.

Ruby has many reasons for being popular and in demand. Few of the reasons are mentioned below: 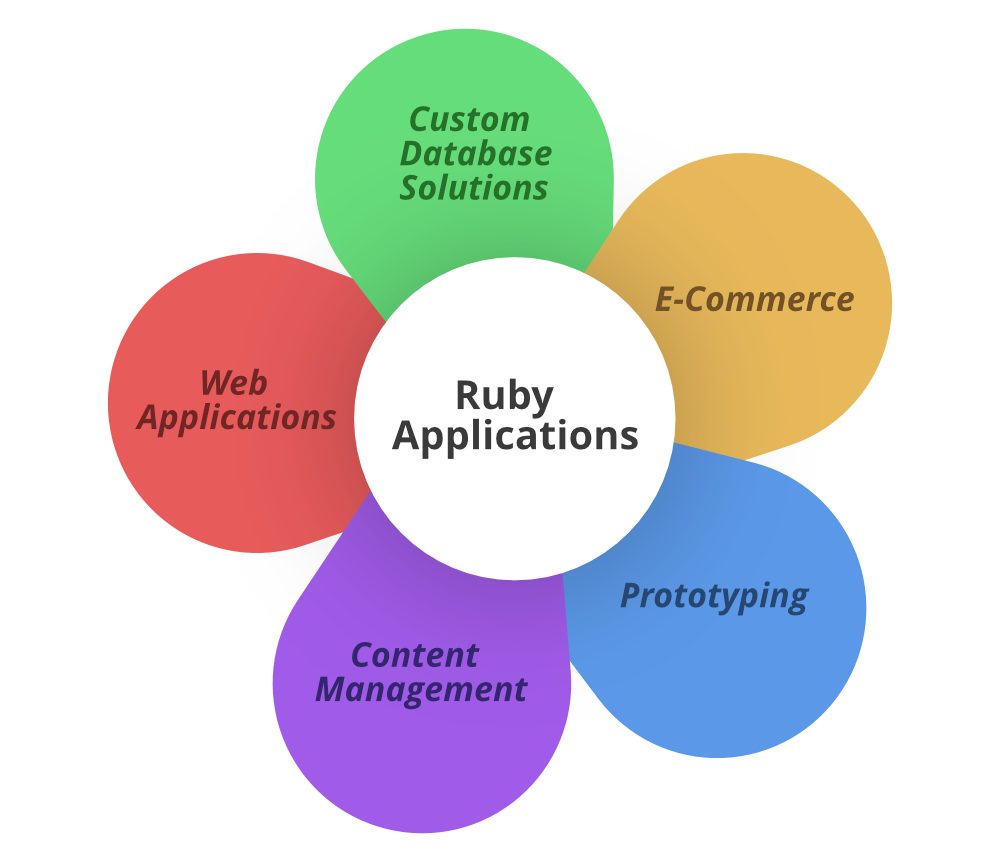 Getting Started with Ruby

Ruby is an interpreted, high-level, general-purpose programming language. Ruby is dynamically typed and uses garbage collection. It supports multiple programming paradigms, object-oriented, including procedural and functional programming. Ruby is based on many other languages like Perl, Lisp, Smalltalk, Eiffel and Ada. This language has an elegant syntax that is natural to read and easy to write. Popular Ruby Editors/IDE are below.

Downloading and Installing Ruby In window: 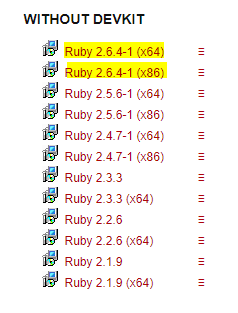 Downloading and Installing Ruby In Linux

How to Run a Ruby Program ?

A variable in simple terms is a storage place which has some memory allocated to it. Basically, a variable used to store some form of data. Variables are simply a storage location. Every variable is known by its name and stores some known and unknown piece of information known as value. There are different types of variables in Ruby:

To know more about Variables, please refer to Variables in Ruby

Decision Making in programming is similar to decision making in real life. In programming too, a certain block of code needs to be executed when some condition is fulfilled. in Ruby, the if-else statement is used to test the specified condition. There are various ‘if’ statements in Ruby:

To know more about decision making please refer to Decision Making In Ruby.

A block is the same thing as a method, but it does not belong to an object. Blocks are called closures in other programming languages. In ruby, Block can accept arguments and returns a value. A block is always invoked with a function or can say passed to a method call. To call a block within a method with a value, yield statement is used.
A block code can be used in two ways as follows:
Inside the do..end statement
Example :

Inline between the curly braces {}
Example :

The yield statement is used to call a block inside the method using the yield keyword with a value.
Example :

the block will execute it gives control back to the method and the method will continue to execute from where yield statement called.

BEGIN and END Block
Ruby source file has a feature to declare the block of code which can run as the file is being loaded i.e the BEGIN block. After the complete execution of the program END block will execute.

To know more about Blocks, please refer to Blocks in Ruby

Looping in programming languages is a feature which clears the way for the execution of a set of instructions or functions repeatedly when some of the condition evaluates to true or false. Ruby provides the different types of loop to handle the condition based situation in the program to make the programmers task simpler. The loops in Ruby are :

To know more about Loops please refer to Loops in Ruby

To know more about Method please refer to Ruby Method

When we say object-oriented programming, we mean that our code is centered on objects. Objects are real-life instances that are classified into various types. Object-oriented programming aims to implement real-world entities like inheritance, hiding, polymorphism, etc in programming. Ruby supports the OOP paradigm by allowing the creation of classes and its objects.
OOPs Concepts:

A Module is a collection of methods, constants, and class variables. Modules are defined as a class, but with the module keyword not with class keyword. Modules are used as namespaces and as mixins. In Ruby, The name of a module must start with a capital letter.
Syntax :

A good program(or programmer) predict error and arrange to handle them in an effective manner. This is not as easy as it sounds. Exceptions are the errors that occur at runtime. An exception is an unwanted or unexpected event, which occurs during the execution of a program i.e at runtime, that disrupts the normal flow of the program’s instructions.
It is the package that contains the information about the exception in an object. Ruby contains a predefined hierarchy of exceptions as shown below: 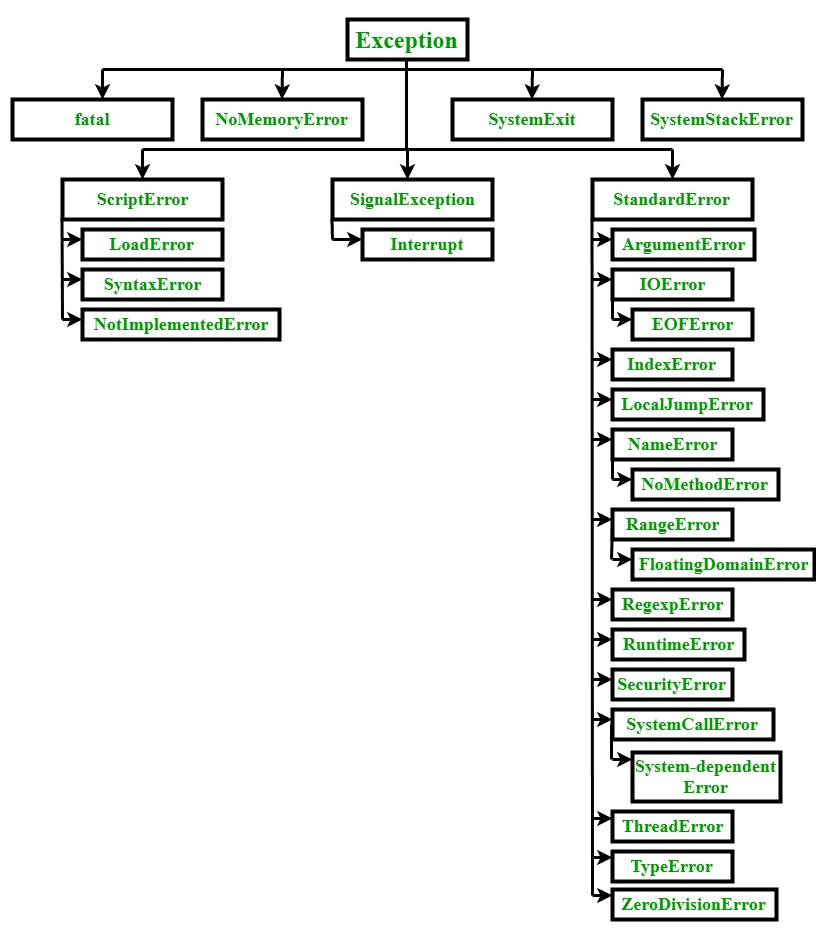 To know more about Exceptions please refer to Ruby Exception

A regular expression is a sequence of characters that define a search pattern, mainly for use in pattern matching with strings. Ruby regular expressions i.e. Ruby regex for short, helps us to find particular patterns inside a string. Two uses of ruby regex are Validation and Parsing. Ruby regex can be used to validate an email address and an IP address too. Ruby regex expressions are declared between two forward slashes.
Syntax :

This will return the index of first occurrence of the word ‘hi’ if present, or else will return ‘ nil ‘.
Checking if a string has some set of characters or not
We can use a character class which lets us define a range of characters for the match. For example, if we want to search for vowel, we can use [aeiou] for match.
Example :

There are different short expressions for specifying character ranges :

An array is a collection of different or similar items, stored at contiguous memory locations. The idea is to store multiple items of the same type together which can be referred to by a common name. In general, an array is created by listing the elements which will be separated by commas and enclosed between the square brackets[].
Syntax :

Retrieving Or Accessing Elements from Array
In Ruby, there are several ways to retrieve the elements from the array. Ruby arrays provide a lot of different methods to access the array element. But the most used way is to use the index of an array.
Example :

To know more about Array please refer to Ruby Array

Hash is a data structure that maintains a set of objects which are termed as the keys and each key associates a value with it. In simple words, a hash is a collection of unique keys and their values. A hash is created using the hash literal which is a comma-separated list of key/value pairs and it always enclosed within curly braces {}. There are different ways to create a hash :
Syntax :

To know more about Hashes please refer to Ruby Hashes

In Ruby, string is a sequence of one or more characters. It may consist of numbers, letters, or symbols. Here strings are the objects, and apart from other languages, strings are mutable, i.e. strings can be changed in place instead of creating new strings.
Creating and Accessing String Elements: User can access the string elements by using the square brackets []. In square brackets [], the user can pass the strings, ranges or indexes.

To know more about Strings please refer to Ruby Strings