There are multiple APIs (e.g-bitly API, etc.) available for URL shortening service but in this article, we will be using Tinyurl API to shorten URLs.

Though tinyURL has not officially released its API but we are going to use it unofficially. Here, we can put as input any number of URLs at a time and get the shortened URLs at a time.

For Example, if in command line we write

then output will be:

Here encoding of url and appending it to API is done and then we open request_url using urlopen. Then we convert the response to UTF-8, since urlopen() returns a stream of bytes rather than a string.

Step 3:
In the last step we are calling main() and we are getting user input by using sys.argv
We have not limited ourself to only one url as input, instead, we are saying that give us as many urls as you want, we will make them tiny. map() is a simple way of looping over a list and passing it to a function one by one.

Finally, the complete code is below: 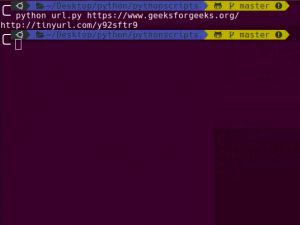