Python is a great language for doing data analysis, primarily because of the fantastic ecosystem of data-centric Python packages. Pandas is one of those packages and makes importing and analyzing data much easier.
Pandas Series.gt() is used to compare two series and return Boolean value for every respective element.

Syntax: Series.gt(other, level=None, fill_value=None, axis=0)
Parameters:
other: other series to be compared with
level: int or name of level in case of multi level
fill_value: Value to be replaced instead of NaN
axis: 0 or ‘index’ to apply method by rows and 1 or ‘columns’ to apply by columns.
Return type: Boolean series

Note: The results are returned on the basis of comparison caller series > other series.
To download the data set used in following example, click here.
In the following examples, the data frame used contains data of some NBA players. The image of data frame before any operations is attached below.

Example 1:
In this example, the Age column and Weight columns are compared using .gt() method. Since values in weight columns are very large as compared to Age column, hence the values are divided by 10 first. Before comparing, Null rows are removed using .dropna() method to avoid errors.

Output:
As shown in the output image, the new column has True wherever value in Age column is greater than Weight/10. 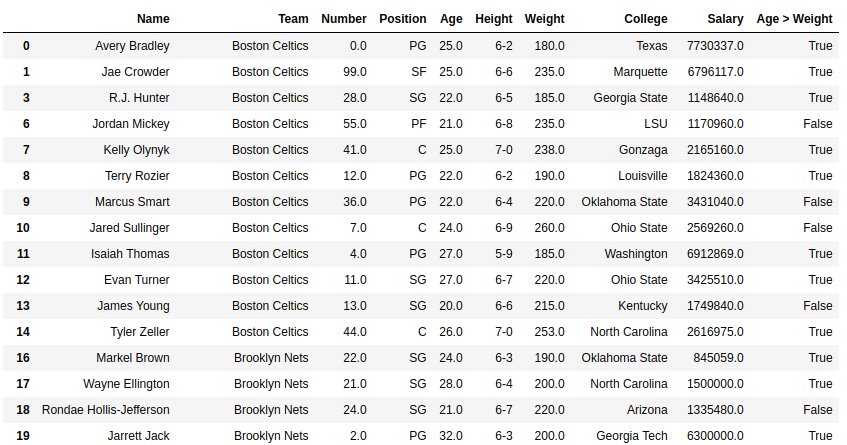 Example  2: Handling NaN values
In this example, two series are created using pd.Series(). The series contains null value too and hence 5 is passed to fill_value parameter to replace null values by 5.

Output:
As it can be seen in output, NaN values were replaced by 5 and the comparison is performed after the replacement and new values are used for comparison.