In this article, we will discuss how to copy the directory structure with files using Python. For example, consider this directory tree: 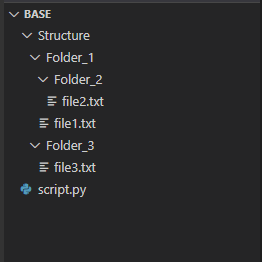 In this article, we will discuss various ways to do it.

Using the shutil.copytree() method of shutil library we can achieve this task. shutil.copytree() method recursively copies an entire directory tree rooted at source (src) to the destination directory. The destination directory, named by (dst) must not already exist. It will be created during copying. It takes an optional argument which is “ignore”.  If “ignore” is given, it must be a callable that will receive as its arguments the directory being visited by copytree(), and a list of its contents, as returned by os.listdir(). For better understanding let’s implement this method by writing code.
The code to copy only directory structure of “Structure” without file to “copied_structure” will be: 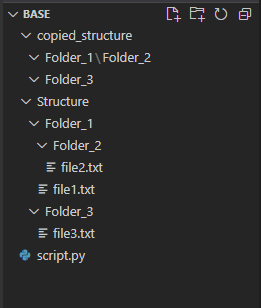 After running this code we will find that a folder named “copied_structure” is made which has the same directory structure as “Structure” but has no file in it.