Data Analytics is an important aspect of many organizations nowadays. Real-time data analytics is essential for the success of a major organization and helps drive decision making. This article will help you gain knowledge about the various data analytic tools that are in use and how they differ.

There are myriads of data analytics tools that help us get important information from the given data. We can use some of these free and open source tools even without any coding knowledge. These tools are used for deriving useful insights from the given data without sweating too much. For example, you could use them to determine the better among some cricket player based on various statistics and yardsticks. They have helped in strengthening the decision making the process by providing useful information that can help reach better conclusions.

There are many tools that are used for deriving useful insights from the given data. Some are programming based and others are non-programming based. Some of the most popular tools are:

SAS:
SAS was a programming language developed by the SAS Institute for performed advanced analytics, multivariate analyses, business intelligence, data management and predictive analytics.
It is proprietary software written in C and its software suite contains more than 200 components. Its programming language is considered to be high level thus making it easier to learn. However, SAS was developed for very specific uses and powerful tools are not added every day to the extensive already existing collection thus making it less scalable for certain applications. It, however, boasts of the fact that it can analyze data from various sources and can also write the results directly into an excel spreadsheet.

It is used by many companies such as Google, Facebook, Twitter, Netflix and Accenture. SAS brought to the market a huge set of products in 2011 for customer intelligence and various SAS modules for web, social media and marketing analytics used largely for profiling customers and gaining insights about prospective customers. Even though it is under attack by upcoming languages such as R, Python, SAS still continues to develop in order to prove that it is still a major stakeholder in the data analytics market. 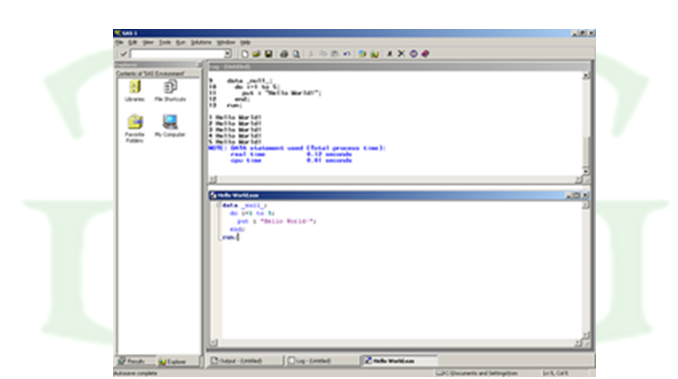 Microsoft Excel :
It is an important spreadsheet application that can be useful for recording expenses, charting data and performing easy manipulation and lookup and or generating pivot tables to provide the desired summarized reports of large datasets that contain significant data findings. It is written in C#, C++ and .NET Framework and its stable version were released in 2016. It involves the use of a macro programming language called Visual Basic for developing applications. It has various built-in functions to satisfy the various statistical, financial and engineering needs. It is the industry standard for spreadsheet applications. It is also used by companies to perform real-time manipulation of data collected from external sources such as stock market feeds and perform the updates in real-time to maintain a consistent view of data. It is relatively useful for performing somewhat complex analyses of data when compared to other tools such as R or python. It is a common tool among financial analysts and sales managers to solve complex business problems. 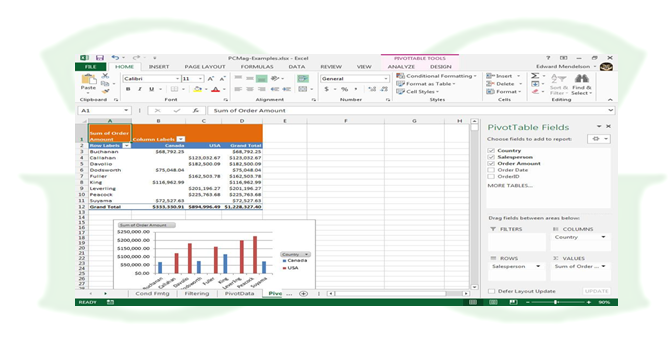 R :
It is one of the leading programming languages for performing complex statistical computations and graphics. It is a free and open-source language that can be run on various UNIX platforms, Windows and MacOS. It also has a command line interface which is easy to use. However, it is tough to learn especially for people who do not have prior knowledge about programming. However, it is very useful for building statistical software and is very useful for performing complex analyses. It has more than 11, 000 packages and we can browse the packages category-wise. These packages can also be assembled with Big Data, the catalyst which has transformed various organization’s views on unstructured data. The tools required to install the packages as per user requirements are also provided by R which makes setting up convenient. 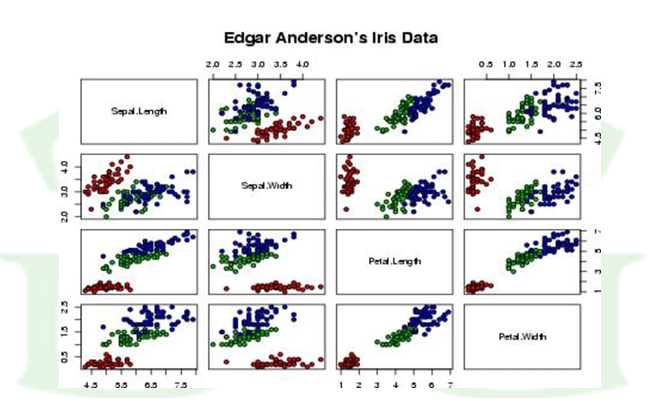 Python :
It is a powerful high-level programming language that is used for general purpose programming. Python supports both structured and functional programming methods. It’s an extensive collection of libraries make it very useful in data analysis. Knowledge of Tensorflow, Theano, Keras, Matplotlib, Scikit-learn and Keras can get you a lot closer towards your dream of becoming a machine learning engineer. Everything in python is an object and this attribute makes it highly popular among developers. It is easy to learn compared to R and can be assembled onto any platform such as MongoDB or SQL server. It is very useful for big data analysis and can also be used to extract data from the web. It can also handle text data very well. Python can be assembled on various platforms such as SQL Server, MongoDB database or JSON(JavaScript Object Notation). Some of the companies that use Python for data analytics include Instagram, Facebook, Spotify and Amazon.

Tableau Public :
Tableau Public is free software developed by the public company “Tableau Software” that allows users to connect to any spreadsheet or file and create interactive data visualizations. It can also be used to create maps, dashboards along with real-time updation for easy presentation on the web. The results can be shared through social media sites or directly with the client making it very convenient to use. The resultant files can also be downloaded in different formats. This software can connect to any type of data source, be it a data warehouse or an Excel application or some sort of web-based data. Approximately 446 companies use this software for operational purposes and some of the companies that are currently using this software include SoFi, The Sentinel and Visa. 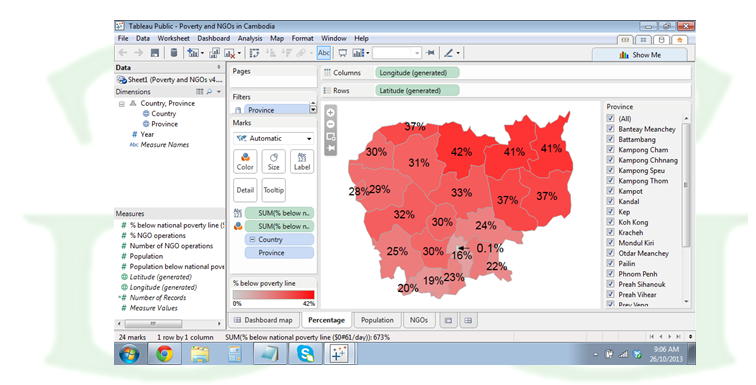 RapidMiner :
RapidMiner is an extremely versatile data science platform developed by “RapidMiner Inc”. The software emphasizes lightning fast data science capabilities and provides an integrated environment for preparation of data and application of machine learning, deep learning, text mining and predictive analytical techniques. It can also work with many data source types including Access, SQL, Excel, Tera data, Sybase, Oracle, MySQL and Dbase. Here we can control the data sets and formats for predictive analysis.
Approximately 774 companies use RapidMiner and most of these are US-based. Some of the esteemed companies on that list include the Boston Consulting Group and Dominos Pizza Inc. 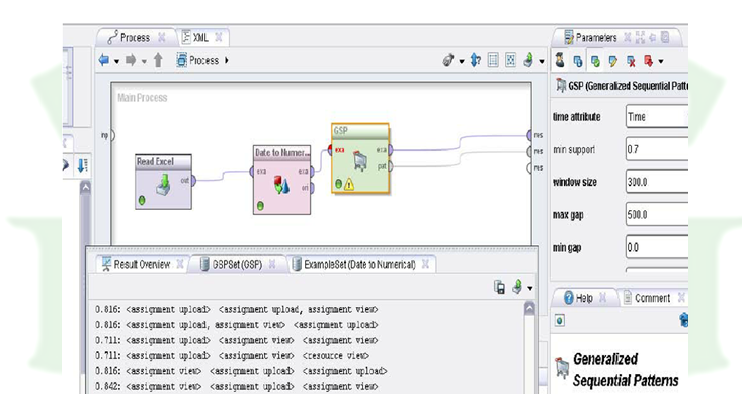 Knime :
Knime, the Konstanz Information Miner is a free and open-source data analytics software. It is also used as a reporting and integration platform. It involves the integration of various components for Machine Learning and data mining through the modular data-pipe lining. It is written in Java and developed by KNIME.com AG. It can be operated in various operating systems such as Linux, OS X and Windows. More than 500 companies are currently using this software for operational purposes and some of them include Aptus Data Labs and Continental AG. 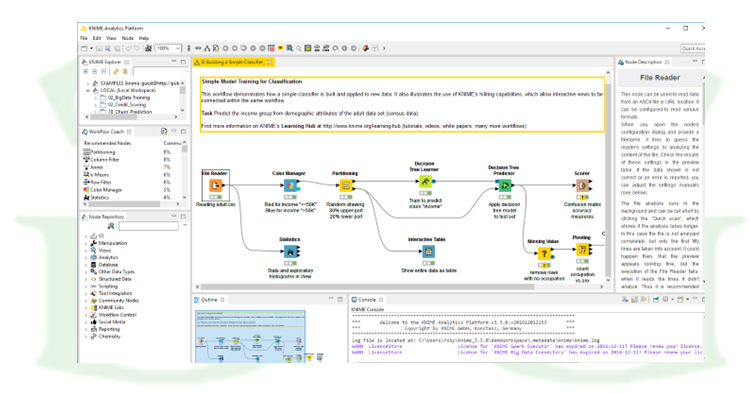