It is important to understand that when you toss a ball against a wall, the ball exerts power on the wall. Similarly, the wall exerts a force on the ball, causing it to bounce off the wall. Similarly, the earth’s gravitational attraction pushes you down. What you may not understand is that you are also putting equal power on the ground. This amazing phenomenon is a result of Newton’s third law.

In the 17th century, Sir Isaac Newton proposed the three laws of motion. These laws are commonly employed in classical mechanics. They are almost universally accepted. The laws are summarized here as:

Here in the present article, only the third law of motion is properly explained. This law discusses the action-reaction pair of applied force.

Let’s understand this more clearly with the help of an example:

Now, let’s learn about two terms called Action and Reaction force, which are used in Newton’s third law of motion.

Action Force: The initial outside force exerted on the body is called the action force.

Reaction Force: The force the body exerts to respond to the action force in the opposite direction is called reaction force. 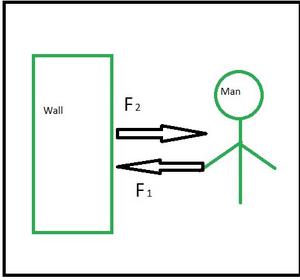 From the above case Newton’s third law of motion can also be stated as:

Nature has a wide range of action-reaction pairings. Following are some examples listed below: 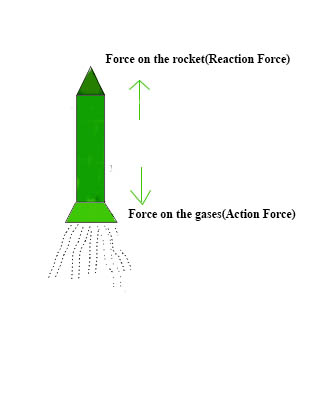 Problem 1: A light ball falling on the ground after striking rises upwards, explain.

A light ball when strikes the ground exerts force on the ground (action force) in the downward direction and thus, according to Newton’s third law of motion, the ground in response to it exerts an equal amount of force in opposite direction on the light ball (reaction force) and thus it rises upwards.

Problem 2: Name the action and reaction force in the following examples:

(a) A book lying on the table

(b) The motion of a rocket in an upward direction

(c) Firing a bullet from a gun

The given examples are categorized as:

Problem 3: Explain the walking of a person on the ground with the help of Newton’s third law of motion.

Problem 4: A man pushes a wall with a force of 100N towards the north. What force does the wall exert on the man?

According to Newton’s third law of motion,

That is, the reaction force is equal to 100 N towards south.

Problem 5: A cricket ball of mass 500 g travelling at 20 m/s is hit by a cricket bat to return it along its original path with a velocity of 10 m/s. Calculate the change of momentum that occurred in the motion of the cricket ball by the force applied by the cricket bat.

The final velocity of the ball after hitting, v is 10 m/s.