An n-ary tree in computer science is a collection of nodes normally represented hierarchically in the following fashion.

A typical representation of n-ary tree uses an array of n references (or pointers) to store children (Note that n is an upper bound on number of children). Can we do better? the idea of Left-Child Right- Sibling representation is to store only two pointers in every node.

It is a different representation of an n-ary tree where instead of holding a reference to each and every child node, a node holds just two references, first a reference to it’s first child, and the other to it’s immediate next sibling. This new transformation not only removes the need of advance knowledge of the number of children a node has, but also limits the number of references to a maximum of two, thereby making it so much easier to code. One thing to note is that in the previous representation a link between two nodes denoted a parent-child relationship whereas in this representation a link between two nodes may denote a parent-child relationship or a sibling-sibling relationship.

Advantages :
1. This representation saves up memory by limiting the maximum number of references required per node to two.
2. It is easier to code.

Disadvantages :
1. Basic operations like searching/insertion/deletion tend to take a longer time because in order to find the appropriate position we would have to traverse through all the siblings of the node to be searched/inserted/deleted (in the worst case).
The image on the left is the normal representation of a 6-ary tree and the one on the right is it’s corresponding Left-Child Right-Sibling representation. 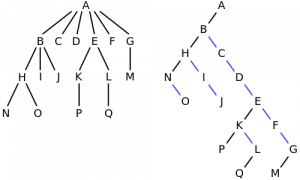 An Example Problem :
Now let’s see a problem and try to solve it using both the discussed representations for clarity.
Given a family tree. Find the kth child of some member X in the tree.
The user inputs two things.
1. A character P (representing the parent whose child is to be found)
2. An integer k (representing the child number)
The problem in itself looks pretty easy. The only issue here is that the maximum number of children a node can have is unspecified which makes it rather tricky to construct the tree. 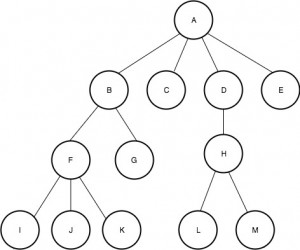 Recommended: Please try your approach on {IDE} first, before moving on to the solution.
Method 1 (Storing n pointers with every node):

In the above tree, had there been a node which had say, 15 children, then this code would have given a Segmentation fault. 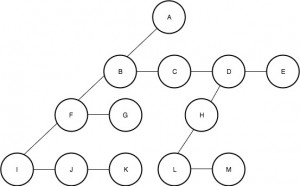 This article is contributed by Akhil Goel. If you like GeeksforGeeks and would like to contribute, you can also write an article using write.geeksforgeeks.org or mail your article to review-team@geeksforgeeks.org. See your article appearing on the GeeksforGeeks main page and help other Geeks.
Please write comments if you find anything incorrect, or you want to share more information about the topic discussed above.