Lead (Pb), is a soft silvery-white or gray metal belonging to group 14 (IVa) of the periodic table. Lead is malleable, malleable, dense, and has poor electrical conductivity. Lead, known from antiquity and considered the oldest metal by alchemists, is very strong and corrosion-resistant, as evidenced by the continued use of lead water pipes installed by the ancient Romans. The symbol Pb for lead is an abbreviation for the Latin word plumbum, meaning lead.

The iodide ion is the I-ion. Compounds with iodine in the formal oxidation state -1 are called iodides. In everyday life, iodide is most commonly encountered as a component of salt iodide, which is mandated by many governments.

First, the formula for lead iodide or lead iodide II is salt. It is also a bright yellow, odorless, crystalline solid that turns orange and red when heated at room temperature. Previously called lead iodide. Currently, the compound has a variety of special uses, such as in the production of solar cells, and X-ray and gamma-ray detectors. However, its preparation is an interesting and popular demonstration in a wide range of chemistry education fields teaching topics such as precipitation. Decomposes in moderately high-temperature light, and we also use this effect in our proprietary photographic process. Lead iodide, formerly under the name iodide yellow, was used as a yellow pigment in many types of paints. However, this use is not currently being used due to poor toxicity and safety.

Lead iodide has a chemical formula of PbI2 and a molar mass of 461.01 g/mol. It is a simple ionic compound composed of a lead cation (Pb2+) and an iodide anion (I–). Its Chemical Structure is, 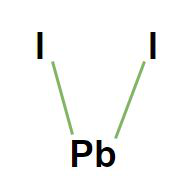 PbI2 in an aqueous solution is usually prepared by precipitation of potassium iodide KI and lead(II) nitrate.

Question 1: Why is lead iodide yellow?

Both compounds are soluble in water. When they are mixed, a double chemical substitution reaction occurs in which the lead and potassium ions switch partners to form soluble potassium iodide KCl and PbI2. It is a yellow solid that precipitates out of the solution as it is insoluble in water.

When a colorless solution of lead nitrate is mixed with a solution of colorless potassium iodide, a golden precipitate of lead iodide is formed.

Question 3: Is the lead iodide safe?

Lead iodide is a potential human carcinogen. Exposure to carcinogens may not be safe, so all contact should be reduced to the lowest possible level. Sheets (MSDS) and labels to identify important safety and health information for product ingredients and product mixtures.

Question 4: Why clean with lead iodide?

Filtration separates insoluble substances from liquids and solutions. The sediment is insoluble in water, so any remaining contaminant solution can be removed by washing with distilled water.

Question 5: How do I remove lead iodide from a test tube?

Lead iodide can recrystallize to form larger crystals that can be removed mechanically. Pour enough water into the tube to submerge all solids. Heat gently and stop until the water boils.

Question 7: What color is lead iodide?

Lead(II) iodide, or lead iodide, is a salt of the formula PbI2. It turns orange and red when heated to a bright yellow, odorless, crystalline solid at room temperature. It was called lead iodide.