There are many frameworks in python which allows you to create webpage like bottle, flask, django. In this article you will learn how to create simple app bottle.Bottle is a fast, simple and lightweight WSGI micro web-framework for Python. It is distributed as a single file module and has no dependencies other than the Python Standard Library.

First we have to install the necessary modules

You  get funny one-liner, mostly related to programming by using just importing a library known as pyjokes.

Some Methods Of pyjokes Library

get_joke()– It only returns one joke. We get random joke each time.

Parameter– The parameters are same as above- language and category.

Inside that create a file app.py

Then create new directory and name it as views

Inside that create new file indes.tpl

To run the app open terminal or cmd 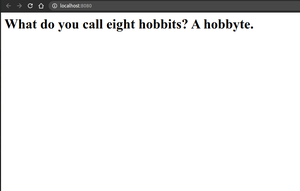