Is It Possible For Robots To Rule Over The Future World?

Imagine a time far in the future where intelligent robots are ruling the world! Humans have been defeated and are now working for robots without any pay. There are a few remaining pockets of the human resistance against robots all over the world but they are fast being destroyed. Humans have lost the war against technology and now there is no hope in sight!!!
Does this sound like science fiction? That’s because it is! This is more likely to be the story of a science fiction movie and not the actual future reality. However, robot pessimists strongly believe that such a future may become a reality if there are not severe restrictions placed on artificial intelligence now. This is not helped by the various predictions of Elon Musk like “AI is a fundamental risk to the existence of human civilization”. On the other hand, some people believe that these doomsday predictions are taking things too far with Mark Zukerberg even commenting that these predictions are “pretty irresponsible” and artificial intelligence can only improve our lives in the future. 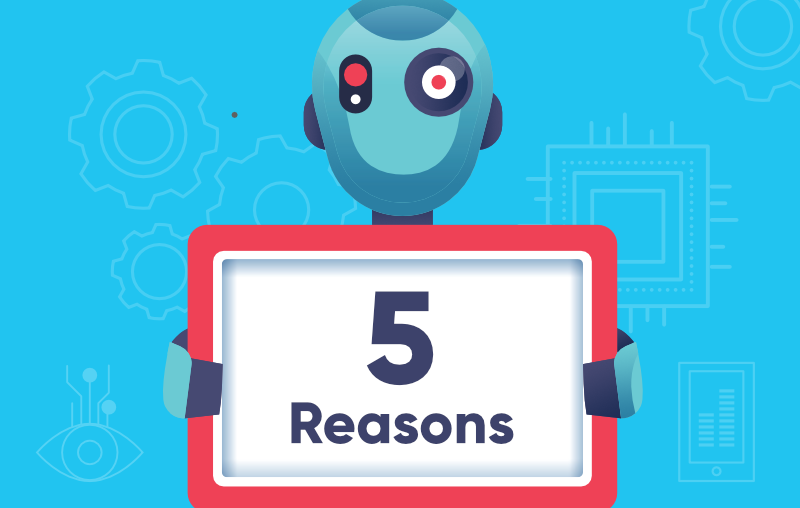 So, in the middle of this raging debate on artificial intelligence and its possible harms in the future (Like an army of intelligent evil robots!), let’s see 5 Reasons Why Robots Won’t Rule Over the Future World!

1. Robots Will Be Too Expensive To Implement WorldWide

If robots were to rule over the whole world in the future, the first assumption is that they would be available everywhere in the whole world. And let me assure you, the world is too large for that to happen easily!!! Robots with artificial intelligence are expensive (the research budgets are in billions currently and they may reduce in the future but by how much?) and it would only make sense to use them in areas where the profits outweigh the costs. So while robots would be used in many fields all over the world, there is no chance they would be EVERYWHERE. And then how would they create an empire ruling over all the humans of the world in the future?!!!
And let’s imagine for a second that all companies fire most of their humans to employ robots? What then? All those unemployed humans won’t be spending any money and then the global economy will crash. Even the companies that fired all their humans will fail because of no profits and they would have to hire humans back again. So robots cannot totally rule over the workplace by replacing all humans at their jobs unless those humans have other jobs to keep the economy afloat.

2. Robots Will Have No Legal Powers

How do you think humans are currently ruling over different countries? Well, the process is called an election and the ruler is called the President!!! So, the only way intelligent robots can take over the world in this system without having an all-out war with the humans is by using legal powers. And they won’t have any!!! Robots (even intelligent ones) are only machines and they won’t have human rights like the right to own property, the right to own companies, the right to vote, etc.
And these rights are a critical part of taking over the world! Also, why would humans even give robots these rights? We all love power and would not never voluntarily allow it to be taken away. Also, while machines may be getting smarter, humans are not getting more dumber and so at most, the intelligent robots will be employed in an advisory role to powerful human beings (Like Presidents!)

3. Robots Cannot Win a War Against The Whole World

Now you might be thinking that if robots cannot rule the world through legal power, they might decide to have a full-on war with humans. And science fiction movies have even encouraged that thinking! Rest assured, that is never going to happen!!! If you look at history, there is no army that has managed to totally rule over the world ever. Humans love being independent and they don’t let anyone take them over easily.
But you might think that super-intelligent robots could manage what humans couldn’t in history. But it is not that easy to take over the whole world with military power. Firstly, the nuclear weapons of countries are not linked to central computers as that would be pretty dumb in even today’s time! So if robots wanted to start a nuclear war, they would have to manually start it, which humans can easily stop.
Also, why are we even assuming that all robots in the future will turn evil and want to rule the humans? There might be different types of intelligent robots with different allegiances (just like humans!) In fact, various governments are already conducting experiments on AI along with many tech companies. So it may happen that robots with different humans groups may fight wars with each other but there is no chance of all robots fighting against all humans.

4. Robots Cannot Take Over All The Jobs

Even if you don’t consider Economics like in point 1, then also Smart Robots cannot possibly take over all the jobs in the world. Most of the creative jobs are safe from robots. Think about it! The value in most art is that it was created by humans. It has feelings and emotions that we can identify with and that makes it valuable. Would you still feel the same way about Mona Lisa if you knew it was created by a robot?
Even in today’s times, local handicrafts and cultural traditions are becoming more and more popular as they represent a uniquely human perspective. (And not a mass-produced industrial one!) So even in the worst-case scenario, jobs that are reliant on the humanity of workers will never be taken over by robots. And it may even happen that the age of robotics and artificial intelligence may, in fact, allow us to explore our humanity and in-built creativity by letting the robots handle all the jobs that can be managed on the level of machines.

5. Why would Robots Even Want to Rule Over The World?

If we assume that the far future will have super-intelligent, highly evolved robots, then the main question is why would they even want to rule over the world? Are we simply imprinting our own desires on machines and imagining that they will also want the same thing all humans do? POWER. Well, if the robots are actually intelligent, why would they want to deal with the complexity of first conquering the whole world and then handling all the human rebellions that would occur?
In fact, Robots may even decide to help humans and make this world a better place. They may even decide to use their super-intelligence to solve the problems that humans are facing like global warming, the refugee crisis, world hunger, etc. Another major point is that robots don’t even need the basic things that humans require such as food, water, oxygen, etc. So why would they even want to bother with conquering Earth when they can just leave and go to any place they desire. Even the sky is not the limit for robots in the future!!!
Keeping all the above points in mind, there is very little chance that the future world might have intelligent robots that rule over all the humans, whether militarily or economically. Of course, there is a chance that humans may use robots to fight their wars or for other evil purposes as that is a part of human nature. But this problem can be tackled by proposing regulations as artificial intelligence evolves sufficiently but it has not yet reached that point yet (And will not even in the near future!)

My Personal Notes arrow_drop_up
Previous
5 Crazy Yet Successful Companies Started By Elon Musk
Next
Have A Happy Diwali With Artificial Intelligence - How AI Can Help In Managing The Pollution This Festival?
Recommended Articles
Page :
5 Best Humanoid Robots in The World
20, Dec 19
7 Future Technologies That Can Change The World
15, Dec 20
7 Tech Trends Expected to Rule in the Post-Covid World
06, Sep 21
Are Robots Really Self-Learning?
20, May 21
Is the future with snake(Python) or Coffee(Java) ?
17, Feb 16
Edge Computing – A Building Block for Smart Applications of the Future
24, Aug 20
Future of home automation
27, Oct 18
Combining IoT and Machine Learning makes our future smarter
23, May 19
The Future of Cognitive Computing
16, Aug 19
5 Dangers of Artificial Intelligence in the Future
30, Dec 19
DARQ – Technology Powerhouse of Future
18, Feb 20
Rust vs C++: Will Rust Replace C++ in Future ?
22, May 20
What is Edge Computing and Its Importance in the Future?
21, May 20
5 Reasons Why Online Learning is the Future
29, May 20
The Future Of Web Development
27, May 20
How can Artificial Intelligence Impact Cyber Security in the Future?
06, Oct 20
How Blockchain Can Change the Future of Banking?
03, Feb 21
The Evolution of DevOps - 3 Major Trends for Future
06, Dec 20
Future of Cybersecurity
22, Nov 20
The State of Software Engineering - Past, Present and Future!
01, Feb 21
Unsupervised Machine Learning - The Future of Cybersecurity
24, Feb 21
Future of Jobs - What You Must Learn?
06, Mar 21
Top 9 Technologies Transforming the Future of Web Development- Comprehensive Guide
20, Jun 21
How Tech Professionals Can Future-Proof Their Career?
04, Oct 21
Article Contributed By :