Introduction to Sockets.IO in Node.js

Earlier, websites used to reload every-time a resource was requested. This introduced unnecessary delays which increased average wait time. Often users had to wait for minutes to fetch a particular page or file. Real-time applications(Instant messenger, Online gaming, push notification etc), on the other hand, are those applications which run within a given time-slot such that user is presented with immediate and up-to-date copy of the resource. Latency in these applications is kept as low as possible to give smooth and consistent user experience. Socket.IO is one such JavaScript library that programmers use in developing real-time “Web Applications”.

Why Sockets.IO :
Most of the applications on Internet today are based on Client-Server architecture. A client is someone who requests something from a Server. A Server, based on the request, responds with appropriate results. These two entities are completely different from each other because of the nature of tasks they perform. A browser is a perfect example of client application. Clients on browsers usually communicate to Servers via HTTP requests and responses. The problem with this communication is that either a request or a response can be sent at a time. For understanding, think of it as a half-duplex link. Also, HTTP headers contain lots and lots of redundant information which is useless once a connection between client and server is made. Sockets on the other hand work on transport layer of Network Stack. There are not many redundant fields thus increase the efficiency of information transfer over web.

Socket.IO works on the same concept and enables bi-directional communication between web clients and servers. For handling them separately and efficiently, it consists of two parts;

Socket.IO relies on Engine.IO, which is the implementation of the transport-based cross-browser/cross-device bi-directional communication layer. It brings in the following features to Socket.IO;

Required for Installation of Sockets.IO

As mentioned earlier, there are two different libraries to include in a project.

This example is about implementing a basic Upvote button in Socket.IO. It will show real-time server and client communication. To start, go to the required project directory and initialize it either with npm init command or manually create a package.json file.

After installing, create index.js file that will setup the application.

What this code does, is it creates a function handler for Express which then gets supplied to an HTTP server. This handler responds with “Hello World” to the client when / page is requested. Finally, the HTTP server starts listening on to the port 3000. 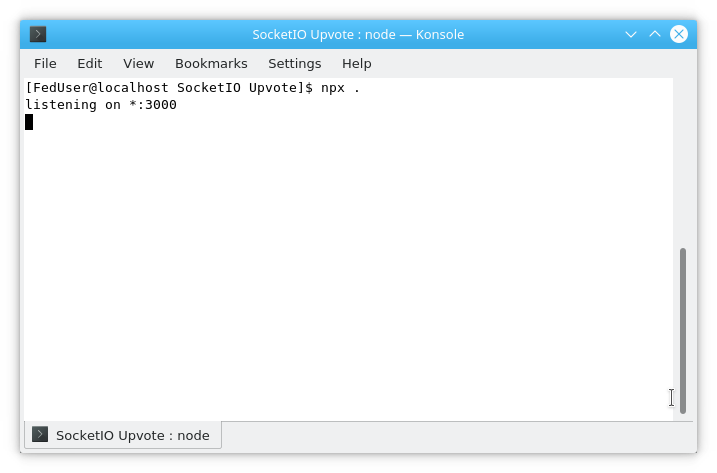 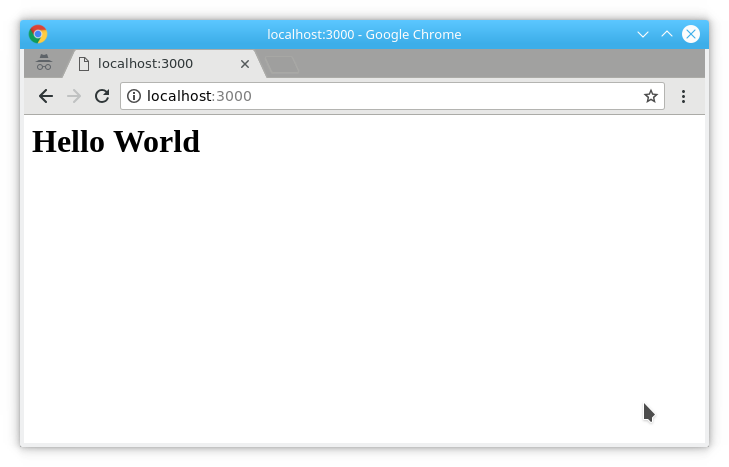 Serving HTML:
Previously, only a single HTML line was being sent as a response to the GET request. This time, attach an HTML file using sendFile method.

Now create the index.html file and paste the following code.

Restart the project and refresh the page, it should look something like this, 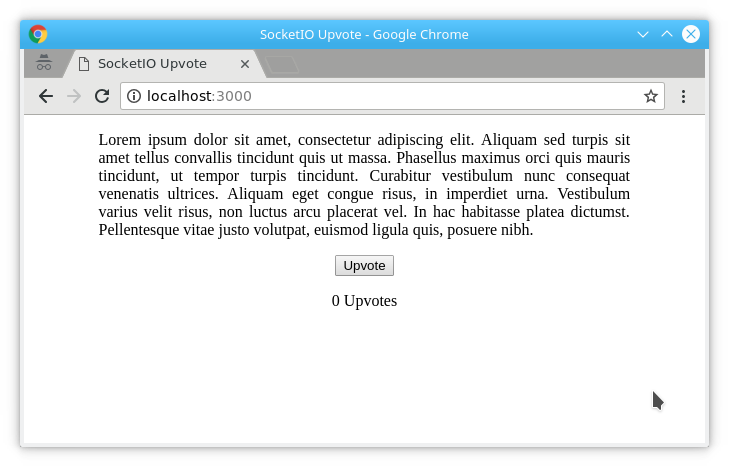 Now make changes to the index.js as follows,

The additional changes initialise the Socket.IO handler. A logging action is attached to this handler when it emits a ‘connection’ signal.

On the client side, all it takes is just the following code snippet before closing tag. This exposes an io global which is used by a particular client.

Restart the project again from the console and try opening the localhost on multiple tabs and browsers. Each of them will act as a unique client connection. The log message will print every time a connection is established between the client and the server. 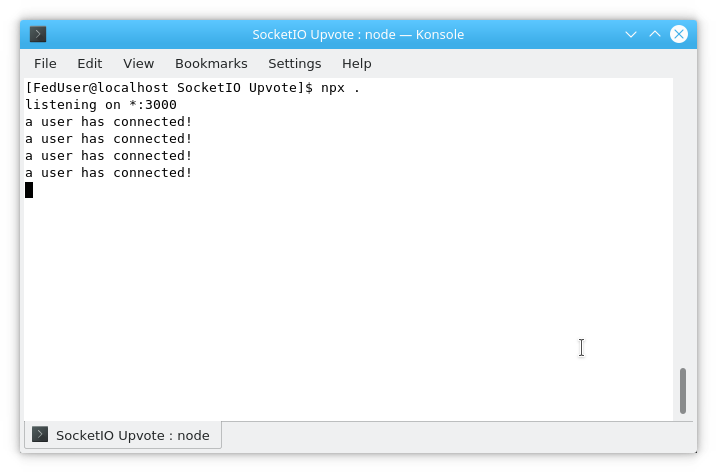 Each socket also fires a special disconnect event when a client closes or refreshes a tab: 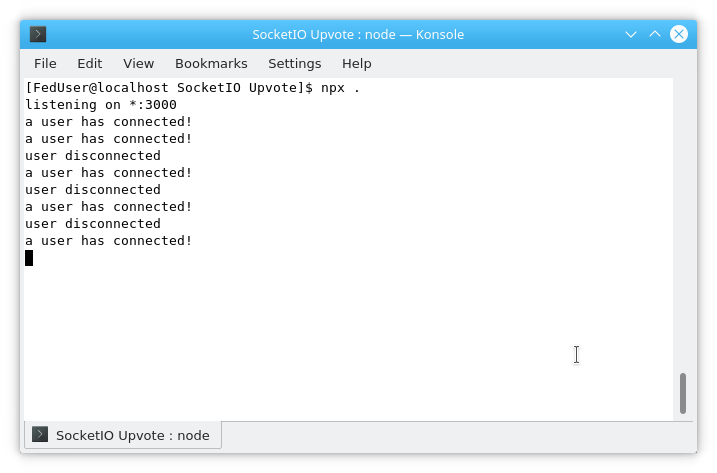 Emitting events:
The main idea behind Socket.IO is that one can send and receive any events of choice, with or without any data. Any objects that can be encoded as JSON will do, and binary data is supported too.

Let’s assume that when a user clicks the upvote button, an event named upvote-event is emitted. So in index.html file, insert the following script.

And in index.js, following code snippet to log the event data. 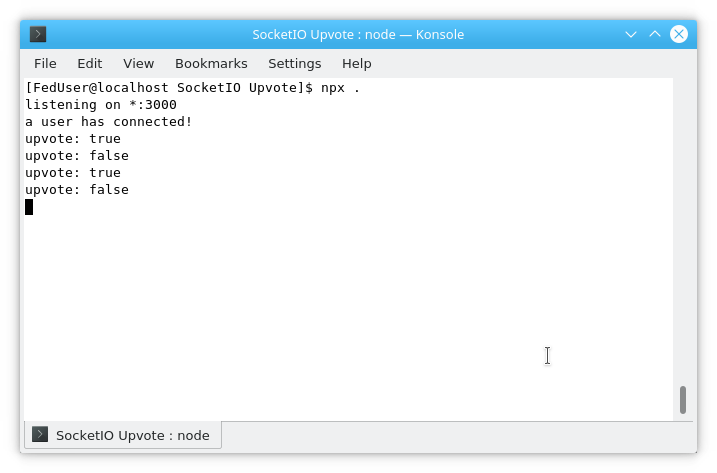 Broadcasting:
The next goal is to emit an event from the server to the rest of the users. This time, upvote count based on the clicks will be broadcasted to each and every client connected to the server. Let’s call this event update-upvotes. For counting number of upvotes, let’s create a variable upvote-count. Update the index.js like this,

Here, upvote_count is initialized with zero(0) and updated based on the value of the upvote_flag. The updated value is then emitted to all the clients, including the one on which ‘update-event’ took place.

It will be updating the DOM element with the current value of the upvote count. The results would look like this, 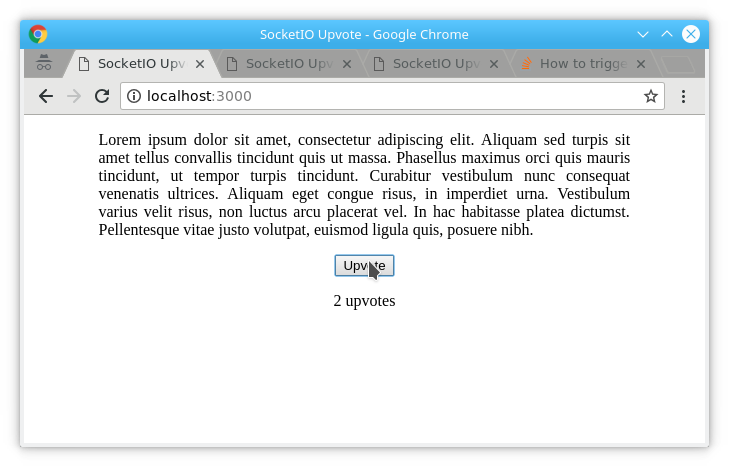 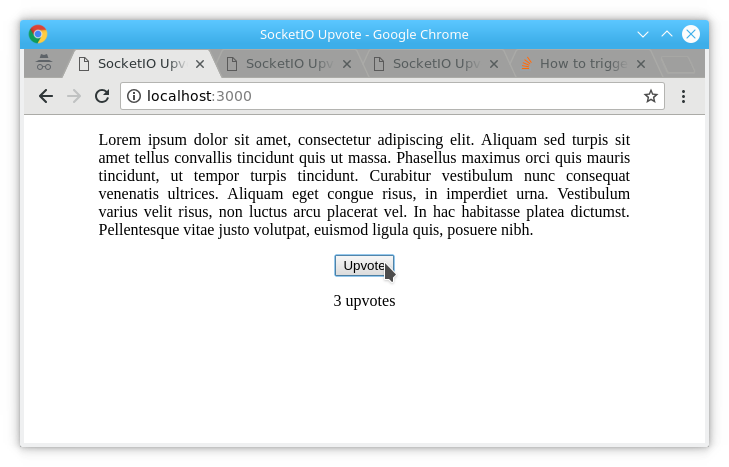 There are a lot of things to take into account to make this example robust and usable in actual development. One should consider the fact that this example will encounter a problem of race condition when multiple users click on the upvote button at the same time. Proper locking mechanisms should be used to make it work in real world applications.