As developers, we always aim to create an application that would run smoothly on millions of devices, however, the performance of practically every application is influenced by the device specifications. There are currently over 16,000 handsets on the market with varying specifications, and the application may perform poorly on some devices when compared to others. Several functions require a fast processor to operate smoothly and may lag on a slow processor. To address this problem, Facebook developed the Device Year Class Library, which uses a simple algorithm to match a device’s RAM, CPU cores, and clock speed to the year in which those characteristics were considered high-end. This enables developers to easily write different logics for the application’s behavior based on the phone’s hardware capabilities. For classification, the Year Class library takes three factors into account:

Based on the device hardware, we can optimize a variety of operations, including:

We’ll now look at how to use this library in an application. We’ll build an application that detects whether or not to display animations based on the device’s year class.

Navigate to the Gradle Scripts > build.gradle(Module:app), add the library in the dependencies section, and sync the project. 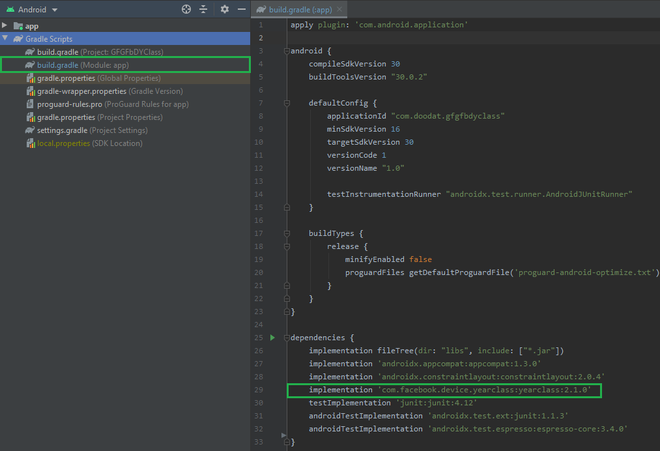 Step 4: Working with the animation.xml file

Below is the code for the animation.xml file.

Step 5: Working with the MainActivity.java file

Previous
How to Change the Shape of ImageButton in Android?
Next
Android Annotation Processing
Related Articles
1. Build an Android App to Check a Year is Leap Year or Not
2. How to Capture a Screenshot and Screen Recording of an Android Device Using Android Studio?
3. How to fix "Android Studio doesn't see device" in Android Studio?
4. Implementation of WhatsNew Library in Android
5. Java Program to Find if a Given Year is a Leap Year
6. How to Install Android Virtual Device(AVD)?
7. How to Run the Android App on a Real Device?
8. How to Check if the Android Device is in Dock State?
9. How to Find the Screen Resolution of a Device Programmatically in Android?
10. How to Display the List of Sensors Present in an Android Device Programmatically?
Article Contributed By :