How to run many parallel HTTP requests using Node.js ?

NodeJS receives multiple client requests and places them into EventQueue. NodeJS is built with the concept of event-driven architecture. NodeJS has its own EventLoop which is an infinite loop that receives requests and processes them. EventLoop is the listener for the EventQueue.

If NodeJS can process the request without I/O blocking then the event loop would itself process the request and sends the response back to the client by itself. But, it is possible to process multiple requests parallelly using the NodeJS cluster module or worker_threads module.

How to scale your NodeJS application with Cluster Module?

A single instance of Node.js runs in a single thread. If you have a multi-core system then you can utilize every core. Sometimes developer wants to launch a cluster of NodeJS process to take advantage of the multi-core system.

The cluster module allows easy creation of child processes that all share the same server ports.

Step 2: Create an index.js file on your root directory with the following code.

Explanation: If your system has 8 CPU then 8 NodeJS instances will be created and every instance has its own independent event loop. Now NodeJS can process all request parallelly.

They are all share same port (PORT 3000) but not state. The master process listens on a port, accepts new connections and distributes them across the workers in a round-robin fashion, with some built-in smarts to avoid overloading a worker process. 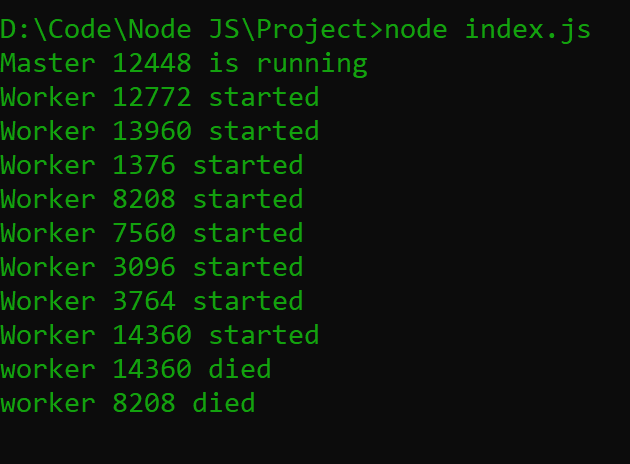 Using worker_threads Module: The best solution for CPU performance is Worker Thread. This module is used in Node.js because it is useful for performing heavy JavaScript tasks.

Example: Create an index.js file with the following code.

Run the server with the following command:

Note: We have to use the –experimental-worker because Workers Thread modules are still experimental.