The above code shows that the reference variable ‘x’ had a scope limited to the function ‘f()’. Therefore, after the termination of the mentioned function, the variable too has no recognition. Therefore, the object created loses it’s reference, and hence, is collected by the garbage collector. 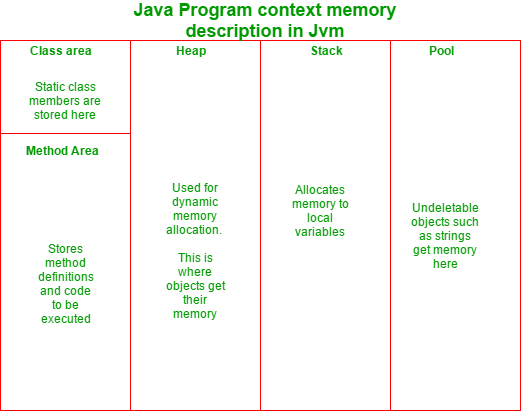 Here, in the above example, you start with 256 MB of initially allocated heap memory, which could be expanded to a maximum of 2048MB of heap size.

In case of a singleton class, the reference of the only object created can be stored in a static reference. Since static members are stored in class area (a memory segment), their lifetime spans the lifetime of the program. The following program explains how to do it:

The above example shows that since the object’s reference has been passed into a static variable, it will never be lost. Therefore, the object won’t be deleted until the end of the program. However, the only issue remains that only one object can be created here.

Finalize is a call-back method (a method called by the JVM, and not by the user), that is last method executed on an object. A subclass may override the finalize method to dispose of system resources or to perform other cleanup.

The finalize method of a class can be overridden to preserve the reference of the object that is about to be deleted. The following program demonstrates, how:

As explained previously, finalize is the last method that is executed on an object. In the above program, the function ‘f()’ creates a local object of class A. When the call of the function terminates, the scope of the variable ‘x’ terminates as well, and hence, is marked for collection by the garbage collector. However, before the garbage collector could delete the object, finalize runs.

However, it is really important to know that making an object undeletable is risky, and increases the chances of memory leaks. Therefore, it is not advisable to do so.