How to Load a Massive File as small chunks in Pandas?

Pandas in flexible and easy to use open-source data analysis tool build on top of python which makes importing and visualizing data of different formats like .csv, .tsv, .txt and even .db files.

For the below examples we will be considering only .csv file but the process is similar for other file types. The method used to read CSV files is read_csv()

filepath_or_bufferstr : Any valid string path is acceptable. The string could be a URL. Valid URL schemes include http, ftp, s3, gs, and file. For file URLs, a host is expected. A local file could be: file://localhost/path/to/table.csv.

The read_csv() method has many parameters but the one we are interested is chunksize. Technically the number of rows read at a time in a file by pandas is referred to as chunksize. Suppose If the chunksize is 100 then pandas will load the first 100 rows. The object returned is not a data frame but a TextFileReader which needs to be iterated to get the data.

In the below program we are going to use the toxicity classification dataset which has more than 10000 rows. This is not much but will suffice for our example.

First Lets load the dataset and check the different number of columns. This dataset has 8 columns.

Let’s get more insights about the type of data and number of rows in the dataset. 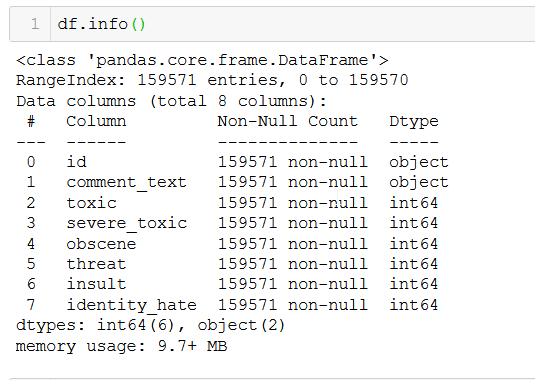 Here we are creating a chunk of size 10000 by passing the chunksize parameter. The object returned is not a data frame but an iterator, to get the data will need to iterate through this object. 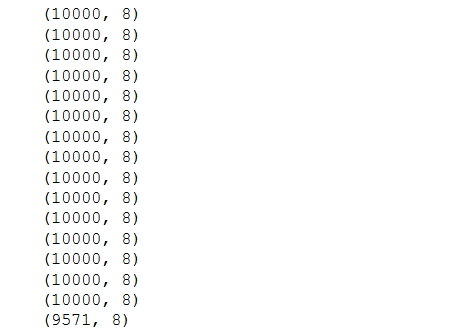 Now, calculating the number of chunks-

The number of columns for each chunk is 8. Hence, chunking doesn’t affect the columns. Now that we understand how to use chunksize and obtain the data lets have a last visualization of the data, for visibility purposes, the chunk size is assigned to 10.

My Personal Notes arrow_drop_up
Previous
Python program to split the string and convert it to dictionary
Next
Python program to find the sum of the value in the dictionary where the key represents the frequency
Recommended Articles
Page :
NLP | Splitting and Merging Chunks
28, Jan 19
NLP | Expanding and Removing Chunks with RegEx
29, Jan 19
Python | Convert String to N chunks tuple
21, Nov 19
Python | Consecutive chunks Product
24, Dec 19
Python - Divide String into Equal K chunks
27, Aug 20
Python - Incremental Size Chunks from Strings
01, Sep 20
Break a list into chunks of size N in Python
16, Jan 18
How to load a TSV file into a Pandas DataFrame?
16, Oct 21
Load JSON String into Pandas DataFrame
15, Aug 20
How to load and save 3D Numpy array to file using savetxt() and loadtxt() functions?
01, Sep 20
How to suppress the use of scientific notations for small numbers using NumPy?
20, Oct 20
Python Program to Remove Small Trailing Coefficients from Chebyshev Polynomial
19, Apr 22
Remove Small Trailing Coefficients from Hermite Polynomial in Python
19, Apr 22
Small World Model - Using Python Networkx
03, Jan 20
numpy.load() in Python
15, Nov 18
Load testing using LOCUST
11, Feb 20
How to Dynamically Load Modules or Classes in Python
24, Feb 20
json.load() in Python
12, Mar 20
Load CSV data into List and Dictionary using Python
10, Apr 20
Python - Difference Between json.load() and json.loads()
25, Nov 20
How to use Pickle to save and load Variables in Python?
23, Feb 21
How to load and use static files in Django?
16, Mar 21
Save and load models in Tensorflow
29, Apr 21
Load NumPy data in Tensorflow
16, Mar 22
Article Contributed By :