How to Install Docker using Chocolatey on Windows?

Installing Docker in Windows with just the CLI is quite easier than you would expect. It just requires a few commands. This article assumes you have chocolatey installed on your respective windows machine. If not, you can install chocolatey from here. Chocolatey is a package manager for the Windows Operating system.

After installing chocolatey, you can verify your installation by running the command on a new CMD or a Powershell instance.

If the following command gives a version number then you have installed Chocolatey successfully on Windows.

It should not be exactly that the version number will be different as per your time of installing the chocolatey on your system.

After installing chocolatey in our Windows System, we need to install the docker package from the chocolatey package manager. To do that we need to simply run the following command in a CMD or a PowerShell instance.

If you want a specific version of docker you can pass the following argument to the command:

So, after this docker is installed, we need to install the docker-daemon using a docker machine to actually install and work with images and containers.

To install docker-machine with chocolatey we can run the simple command as follows:

It will take some time to install the docker-machine package on your local machine.

Also, add the path of Virtual Box installation to the environment variable PATH. You can add the PATH of the Virtual Box using a CMD or a PowerShell.

You need to add the Virtual Box system permanently in the system, you need to add it to an environment variable PATH by clicking on Control Panel -> Advanced System Settings -> Environment Variables -> Edit Path variable and simply add the path and save the variable.

The Path can be surely different as per your installation preferences. This will add Virtual box binaries as a PATH to be run from CMD or PowerShell instances in Windows. So, after we run VirtualBox in CMD or PowerShell, we get the GUI. 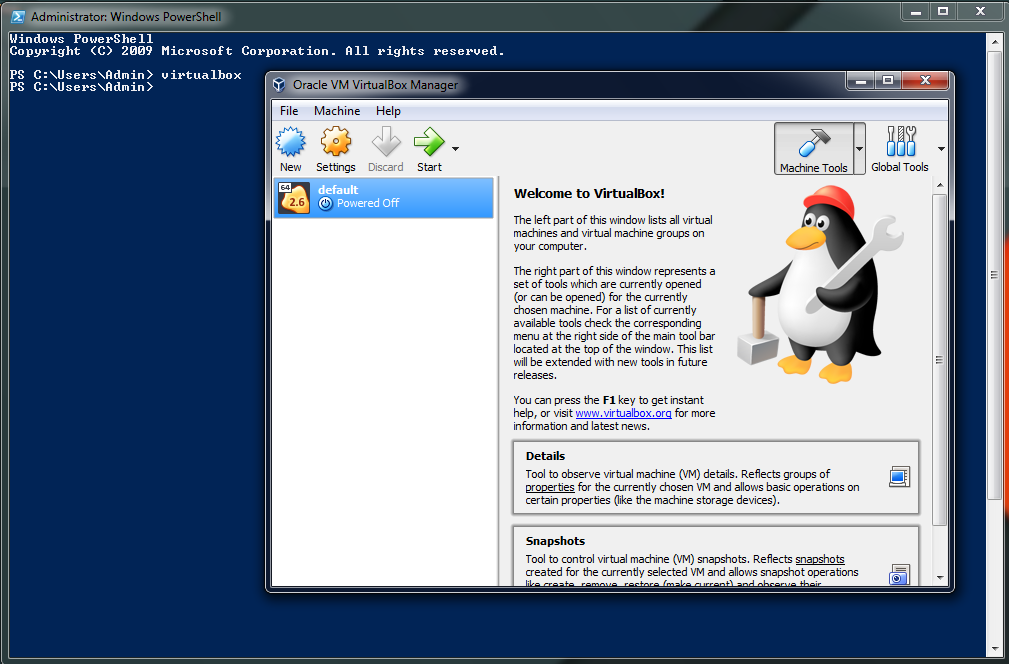 Now, we need to enable VTx Setting in your System BIOS. This can be checked and enabled by pressing certain specific keys like F2 or F10 or others at the boot-up time of the system.

Now, after we have installed Virtual Box and Docker machine, we can move on to creating a default docker machine on the system.

If it gives an error of enabling the VTx in BIOS, enter the check for it by re-running the command as follows:

We need to run the command:

This will start the default docker-machine which is a virtual machine created in a virtual box.  After finishing the command the prompt itself says to run the env command. so, we need to run the command as follows:

This will finally start the docker-machine in the system, which means the docker daemon is running in your system now. We can finally run install or run docker in CMD or PowerShell instances.

So, to run docker we can follow the official docker documentation.

Now, we finally have a docker setup in Windows using the chocolatey package manager. You can now use docker as you wished to do by running or pulling images and containers.

So, from this article, we were able to set up Docker using a chocolatey package manager in Windows.