There are a couple of quick ways to create a text file from the Linux Command Line or Terminal. Some of them have been explained in the following article.

This is the most standard command to quickly create an empty text file. The command is quite simple to type and makes it quite easier to create several text files at once. The commands are as follows:

As simple as that, just type the word touch followed by the name of the file you like to give it, and Voila! you have created an empty text file inside of a terminal. You can add the file names of the file you would like to create at once with space in between each filename. The command below creates three empty files at once using the touch command and you can create as many files as you like.

It is also quite easy to understand the command to create a text file in the terminal with the minimum effort. This works really very well for creating a single text file quickly, but for creating several text files at once it becomes a bit tedious. The command is simply using the standard redirect symbol (>) spacebar followed by the file name.

If you want to create several text files at once, then you can add the redirect symbol after the previous filename and chain the command repeatedly to create multiple empty files. 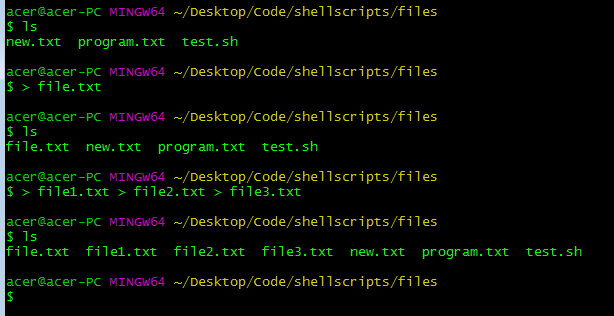 Now, this method is also quite simple and easy to use. Simply type in CAT with two redirect symbols (>>) and the file name( It is not mandatory to use >> symbols, a user can also use > symbol, but if the user types  a pre-existing file by mistake, the existing content in the text file will be overwritten using a single > symbol). This method is a kind of combination of touch and the redirect symbol commands. This method is a bit quirky, so you only prefer using the above two commands if you want to create an empty never edited file. If you want to create and type in the text file straight away, by far this is quite a brilliant method. This will save you time to open up an editor and the command is also quite easy.

The below command creates an empty yet edited file as it prompts the user to create a text file and type in the file at the same time. So, if you do not want to edit the file, simply press CTRL+C and it will simply exit and create an empty file.

But, if you would like to add some text to the file, you can type in after this, like this:

To stop editing and saving in the file, simply type CTRL+C, it will create, save and exit the file. So, this method is quite a time-saving method if you want to edit the text file very quickly. The following command will append the text to the pre-existing file. On the other hand, if you use a single redirect symbol(>) it will overwrite the content of the file, so you only prefer using double redirect symbols for safety reasons. 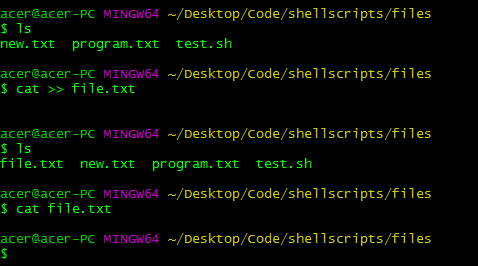 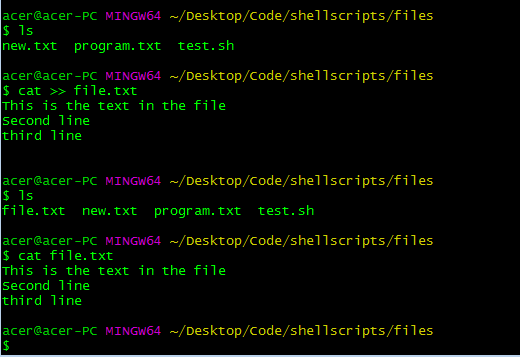 Using cat command to create and write a file.

This is also similar to cat command, but it is very flexible comparatively. The following command is usually used for printing text on the terminal, but we can also use it to write to a file or make an empty file. The echo command is used along with the double redirect symbols (single > will also work) followed by the filename.

If you want to create multiple files at a time, you can chain up the command as in previous methods.

We can also add functionality to the echo command to quickly create and write to the text file just like  cat command.

The above command can be highly customizable as it uses the properties of the echo command to make it quite versatile to write the text in the file, but using a new line character every time can be annoying as well. 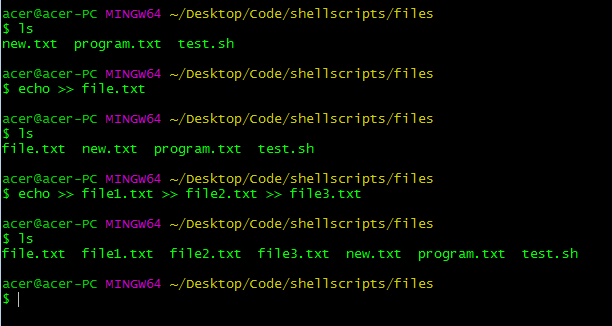 Using echo command to create and write to a file.

Similar to the echo command, we have the printf command as well. The print command does the same thing as the echo command but in a C style rather than shell-style editing.

printf “This is some text here \n The second line \n The third line” >> file.txt

The print command does some pretty C-like things, such as the newline character and the variable names can be used as well, but that is not for a simple text file. But still, the printf command can be useful in a lot of cases to edit files on the go. 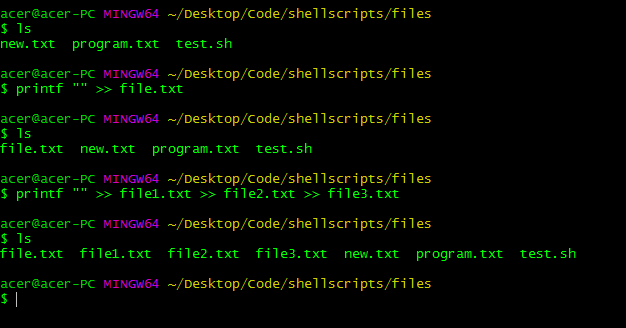 Using printf to create and write to files.

This is the most time-consuming method and not the fastest, yet the method can be useful for Linux beginners. If you want to heavily edit a text file, you can use command-line text-editors such as Vim, nano, and there are other options as well. But most people use nano as it is simple to use and quick to go. Vim can also be used but most beginners find it difficult to use, so we’ll stick with nano for this example.

We are now in the nano editor(or vim). You can type in the stuff you require and simply type CTRL+S to save and CTRL+X to exit. In Vim it is a bit different. We won’t make a vim guide here, so you can check out the ‘Nano text editor in Linux‘ or ‘Getting started with vim‘ article from geeks for geeks. 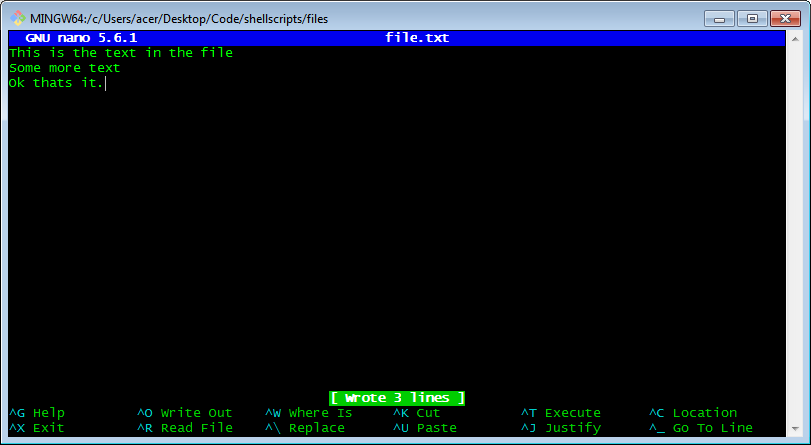 So that wraps up the methods for quickly creating a text file or writing to the file. Each method can be used differently depending on the situation and the case used. Not every method will be the fastest, yet these were some of the fastest ways to create a Text File Using the Command Line in Linux.

My Personal Notes arrow_drop_up
Previous
How to Compare Local and Remote Files in Linux
Next
How to Install Go Programming Language in Linux?
Recommended Articles
Page :
Extract Emails From a Text File Using Grep Command in Linux
24, Jun 22
Checking Disk Space in Linux Using Command-Line
03, Feb 20
Connecting to the Internet Using Command Line in Linux
01, May 20
Ccat – Colorize Cat Command Output command in Linux with Examples
20, Sep 21
Linux Operating System | CLI (Command Line Interface) and GUI (Graphic User Interface)
03, May 19
How to Download YouTube Videos in Linux Command Line?
25, Sep 19
Deepl - Command Line Language Translator Tool for Linux
12, Feb 21
How to Convert PDF to Image in Linux Command Line?
23, Mar 21
Command-Line Tools and Utilities For Network Management in Linux
04, Apr 21
How to Install and Use Sysdig from Linux Command Line?
17, Apr 21
Aria2 - Multi-Protocol Command-Line Download Tool for Linux
15, May 21
Optimize and Compress JPEG or PNG Images in Linux Command line
26, Aug 21
Top Linux Command Line Tips and Tricks
20, Mar 22
Kali Linux - Command Line Essentials
27, Jun 20
Bash Scripting - How to read a file line by line
19, Nov 21
file command in Linux with examples
18, Feb 19
How to Save Output of Command in a File in Linux?
15, Mar 21
How to Append Text to End of File in Linux?
05, Mar 21
Useful Commands For Filtering Text for Effective File Operations in Linux
19, Apr 22
How to Create a File in the Linux Using the Terminal?
06, Apr 21
Bash shell script to find out the largest value from given command line arguments
30, Aug 19
GithubFind3r - Fast Command Line Repo/User/Commit Search Tool
20, Sep 21
Bash Script - How to use Command Line Arguments
23, Jan 22
How to Reboot Ubuntu through the Command Line
01, Jun 22
Article Contributed By :