How to Compare Local and Remote Files in Linux

In this article, we will discuss how to compare or differentiate between local and remote files in Linux.

Programmers and writers often want to know the difference between two files or two copies of the same file when writing program files or regular text files. The discrepancy between the contents of two Linux machine files is referred to as a diff. A reference to the performance of diff, the well-known Unix command-line file comparison tool, inspired this definition.

diff (short for difference) is a simple and straightforward tool that compares two files line by line and shows the differences between them. It prints the lines that are different. Importantly, if you want the two files to be similar, diff also produces a collection of instructions for how to modify one file to make it identical to the other.

Let’s suppose you have two files :

Run the following command to compare or identify the differences between two files on separate servers. Remember to change the user and remote host to your own values.

In Linux/Unix-like operating systems, the cat (short for “concatenate”) command is one of the most commonly used commands. We can use the cat command to build single or multiple files, display their contents, concatenate files, and redirect output to a terminal or files. You can also use the output redirection option to save the difference between the two files.

The contents of the diff output.txt file can then be viewed using the cat command.

You may also compare or notice the difference between two files on two different remote servers, as shown here:

Consult the diff man page for more detail, as shown. 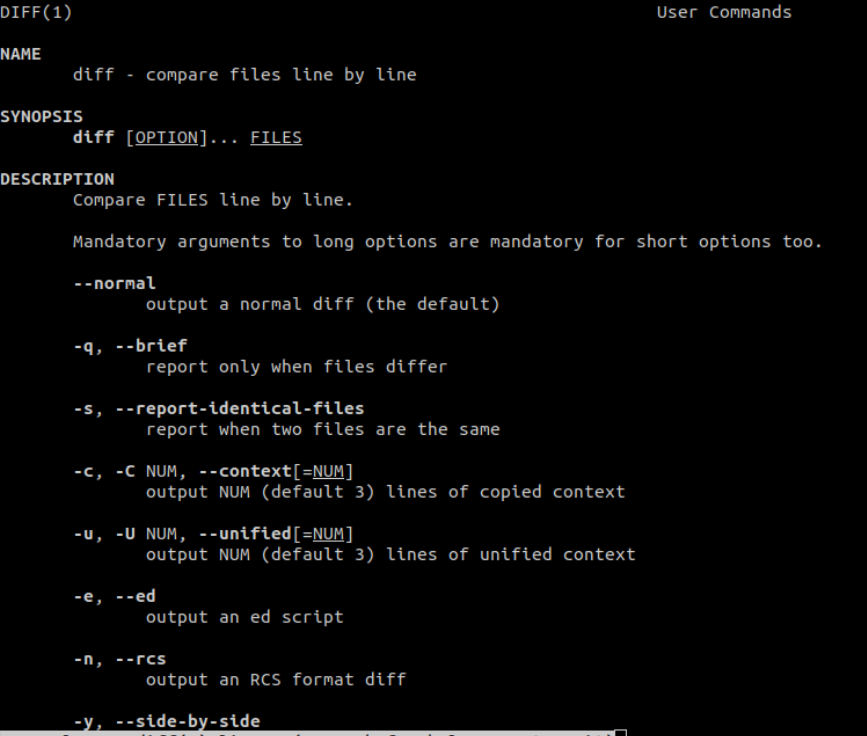 If you want to take a more visual approach to your terminal session, there exists a remote file system option and a visual file comparison option in the midnight commander for you. Many Linux systems do not have it installed by default, but it is available in most base repositories. Here are the steps to be taken:

In most terminal sessions, the midnight commander menu can be accessed by using the mouse. If that doesn’t work, F9 will take you to the menu.

Previous
IPGeoLocation - Find IP address information in Kali Linux
Next
How to Use Twint OSINT Tool on Google Cloud Console ?
Related Articles
1. Rdiff-backup - A Local and Remote Backup Tool for Linux
2. Shell Script to Download Files From a Source Directory on a Remote FTP Server
3. DriveSync Local Files with Google Drive using Linux CLI
4. Woof - Easily Exchange Files Over a Local Network in Linux
5. How to Use Glances to Monitor Remote Linux in Web Server Mode?
6. Shell in a Box - Remote Linux Server via Web Browser
7. How To Setup an Iptables Firewall to Enable Remote Access to Services in Linux
8. How to Control Systemd Services on Remote Linux Server
9. How to create a Shared Folder between two Local User in Linux?
10. Ways to Permanently and Securely Delete ‘Files and Directories’ in Linux
Article Contributed By :