Difference between RAID 1 and RAID 5

Prerequisites – RAID , RAID levels
1. RAID 1 :
RAID 1 is also known as the mirror configuration of data as it replicates the data from drive 1 to drive 2. In RAID 1, one of the drives is used to store the data and another one acts as a mirror to the already stored data. This level of RAID provides 100% data redundancy in case of any failure.

Advantage –
It has good fault tolerance i.e. ability to maintain functionality even if one disk fails.

Disadvantage –
It is expensive because the extra drive is required for mirroring. 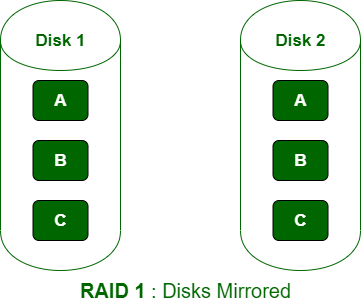 2. RAID 5 :
In RAID 5, data is equally divided in all disks and minimum number of physical disks needed is 3. The main advantages of RAID 5 over RAID 1 are no need of large space, supports data accessing at the time of recovery and high security of data. RAID 5 is generally suited for medium level of applications.

Disadvantage –
RAID 5 allows recovery of at most 1 disk failure (because of the way parity works). If more than one disk fails, there is no way to recover the data. 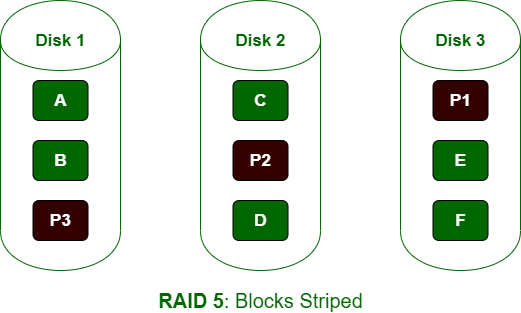 Difference between RAID 1 and RAID 5 :