Data type of a Pointer in C++

A pointer is a variable that stores the memory address of an object.  The pointer then simply “points” to the object. The type of the object must correspond with the type of the pointer. Pointers are used extensively in both C and C++ for three main purposes:

Pointer is a data type and the purest form of it in C is void *. A void * can pass the memory address around which is what a pointer does but it cannot be dereferenced.

Dereferencing means to get at the data contained at the memory location the pointer is pointing at. This means that one will know what type of data will be read from the memory.

Since void is nothing, it means that it can point to any block of memory, that contains any type of data. void * is rather a restricted type as one cannot dereference it and thus it cannot be used for pointer arithmetic.

To make life easier C provides a series of derived pointer types like char *, int *, double *, and so on. Pointers have their own size irrespective of the type of data they are pointing to.

C program to print the size of the pointer:

C++ program to print the address of the pointer:

Why declaring data type of pointer is necessary?

The data type of a pointer is needed in two situations:

Let’s discuss each of these in detail.

Different types of pointers take different amounts of memory. So, in the case of advancing a pointer one needs to take the type’s size into the account.

Similarly, for int it is 4 bytes, so ptr++ in case of int will be adding 0x04 to the address stored in the pointer.

Pointer data type is a special kind of variable which are meant to store addresses only, instead of values(integer, float, double, char, etc).  It knows how many bytes the data is stored in. When we increment a pointer, we increase the pointer by the size of the data type to which it points.
Let’s consider the following memory block- 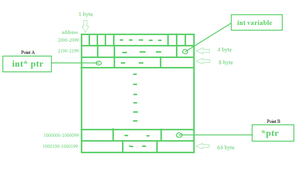 A pointer takes 8 bytes of memory to get stored. In the above memory block-

Therefore, it can be concluded that the main reason behind declaring pointers with data type is it can help with saving extra time spend in access of variables during its implementation.