Sparse file is a type of computer file, which generally has file size (logical) higher than allocated size (clusters allocated to data of the file). Most File systems support this type of file, but Operating system suppresses them underneath command interpreters’ command or API calls.

Therefore, these could not be accessed using generic copy/paste/create methods, rather they are exposed via specialized commands in command processor of operating system or API calls. In this article, we will take look at commands offered by command processor of OS’es to create sparse files.

The above command creates new file (filled with zeros) under name of applese. But file isn’t sparse as of now. To make this file sparse file execute following commands, after previous one.

The first command enables sparse flag on our newly created file. This allows for execution of second command which sets first 1000 bytes of our file (from 0 – 1000) to sparse range. Therefore, we get a completely sparse file. The confirmation of which is provided by layout command.

Clear from above section of layout command, our file has 0 allocated sizes but 1000 bytes of virtual size. This could also be seen in properties of the file. 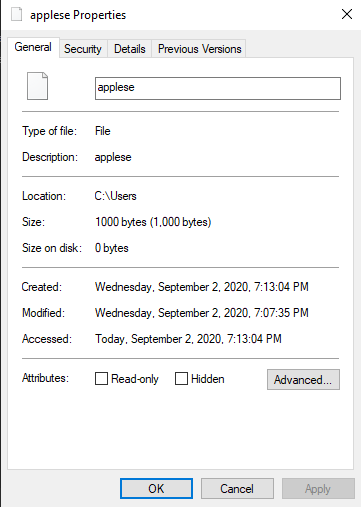 The above command creates sparse file named temp, which is 5 megabytes (~5 million bytes) in size.