Packages are a way of structuring many packages and modules which helps in a well-organized hierarchy of data set, making the directories and modules easy to access. Just like there are different drives and folders in an OS to help us store files, similarly packages help us in storing other sub-packages and modules, so that it can be used by the user when necessary.

To tell Python that a particular directory is a package, we create a file named __init__.py inside it and then it is considered as a package and we may create other modules and sub-packages within it. This __init__.py file can be left blank or can be coded with the initialization code for the package.
To create a package in Python, we need to follow these three simple steps:

Let’s look at this example and see how a package is created. Let’s create a package named Cars and build three modules in it namely, Bmw, Audi and Nissan.

Now, let’s use the package that we created. To do this make a sample.py file in the same directory where Cars package is located and add the following code to it:

Various ways of Accessing the Packages

Let’s look at this example and try to relate packages with it and how can we access it. 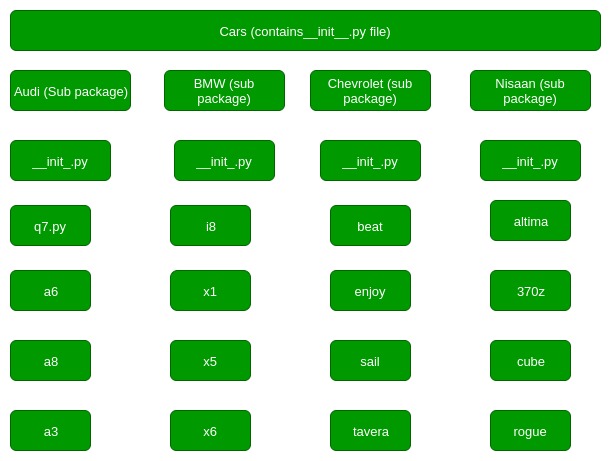