The BlockingDeque interface is a part of the Java Collections Framework. It gets its name because it blocks illegal operations such as insertion into a full queue or deletion from an empty queue, all of these properties are inbuilt into the structure of this interface. Since it is a deque (double-ended queue) that is the insertion, deletion, and traversal operations can be performed from both ends. The BlockingDeque is an interface, so we cannot declare any objects with it. 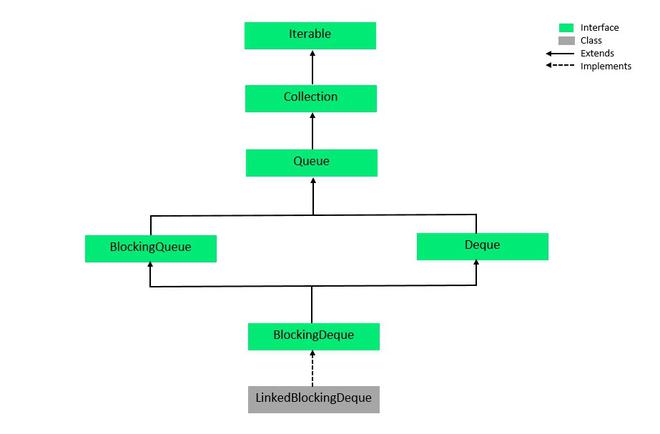 Here, E is the type of elements in the collection.

The syntax for creating objects:

Elements can be added into a LinkedBlockedDeque in different ways depending on the type of structure we are trying to use it as. The most common method is the add() method using which we can add elements at the end of the deque. We can also use the addAll() method (which is a method of the Collection interface) to add an entire collection to LinkedBlockingDeque. If we wish to use the deque as a queue we can use add() and put().

The elements of the LinkedBlockingDeque can be accessed using contains(), element(), peek(), poll(). There are variations of these methods too which are given in the table above along with their descriptions.

Elements can be deleted from a LinkedBlockingDeque using remove(). Other methods such as take() and poll() can also be used in a way to remove the first and the last elements.

4. Iterating through the Elements

To iterate through the elements of a LinkedBlockingDeque we can create an iterator and use the methods of the Iterable interface, which is the root of the Collection Framework of Java, to access the elements. The next() method of Iterable returns the element of any collection.

The behavior of BlockingDeque Methods

The following are the methods provided by the BlockingDeque for insertion, removal, and examine operations on the deque. Each of the four sets of methods behaves differently if the requested operation is not satisfied immediately.