In this article, we are going to see some basics of ANN and a simple implementation of an artificial neural network. Tensorflow is a powerful machine learning library to create models and neural networks.

It is designed to make a computer learn from small insights and features and make them autonomous to learn from the real world and provide solutions in real-time faster than a human.

A neuron in an artificial neural network, will perform two operations inside it

So a basic Artificial neural network will be in a form of, 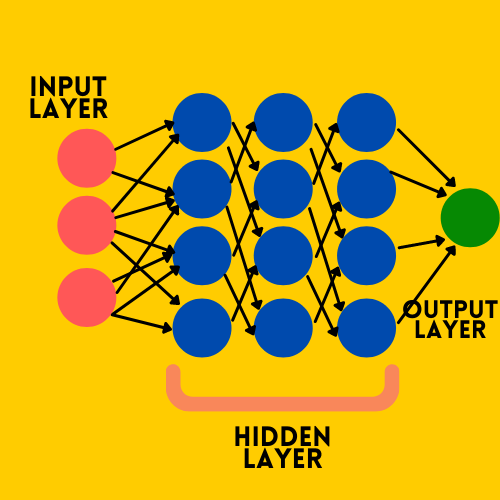 So as we know the outline of the neural networks, now we shall move to the important functions and methods that help a neural network to learn correctly from the data.

Some of the features that determine the quality of our neural network are:

Now we shall discuss each one of them in detail,

The first stage of our model building is:

A hidden layer is a layer where all the magic happens when all the input neurons pass the features to the hidden layer with a weight and a bias each and every neuron inside the hidden layer will sum up all the weighted features from all the input layers and apply an activation function to keep the values between 0 and 1 for easier learning. Here we need to choose the number of neurons in each layer manually and it must be the best value for the network.

Here the real decision-makers are the weights between each layer which will finally pass a value of 0 to 1 to the output layer. Till this, we have seen the importance of each level of layers in an artificial neural network. There are many types of layers in TensorFlow but the one that we will use a lot is Dense

This is a fully connected layer in which each and every feature input will be connected somehow with the result.

Activation functions are simply mathematical methods that bring all the values inside a range of 0 to 1 so that it will be very easier for the machine to learn the data in its process of analyzing the data. There are a variety of activation functions that are supported by the Tensor flow. Some of the commonly used functions are,

After this, we can see the params in the compilation of the model in TensorFlow,

There are many loss functions that were supported by the TensorFlow library, and again commonly used few are,

Note: Again the choice of loss is completely dependent on the type of problem and result we expect from the Neural network.

Optimizers are a very important thing because this is the function that helps the neural network to change the weights on the backpropagation so that the difference between the actual and predicted result will decrease at a gradual pace and obtain that point where the loss is very minimum and the model is able to predict more accurate results.

Again TensorFlow supports many optimizers to mention a few,

After compiling the model we need to fit the model with the dataset for training,

Epochs are simply the number of times the entire dataset passes forward and backpropagated by updating the weights on a neural network. BY doing this we can find unseen patterns and information in every single epoch and hence it improves the accuracy of the model.

And to handle some limitations of the neural networks like overfitting the training data and could not able to perform well on the unseen data. This can be solved by some dropout layers which means making some amount of nodes in a layer inactive which forces each and every node in the neural network to learn more about the features of the input and hence the problem can be solved.

In TensorFlow, to add a dropout in a layer is literally a line of code,

How to Train a Neural Network with TensorFlow :

We are going to import the required libraries.

The data we used for this example are generated randomly with Numpy. You can download the data here. In this data x and y are the point of coordinates and the color feature is the target value that was generated randomly which is in binary representing Red – 1 , Blue – 0. 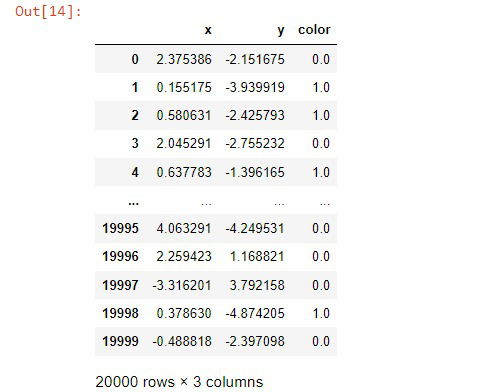 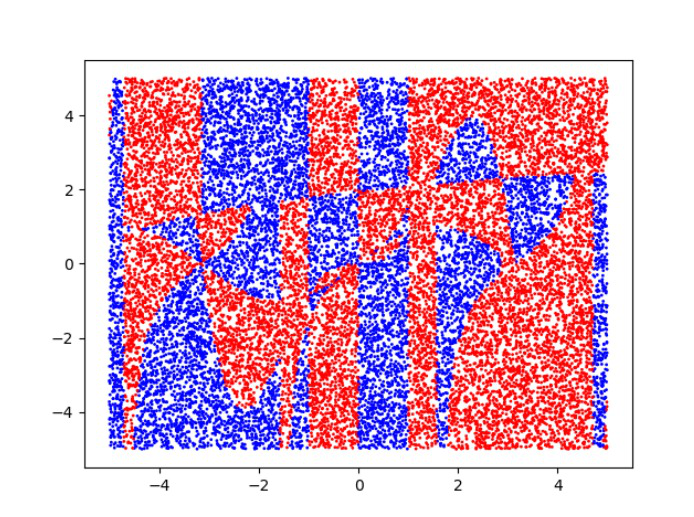 Now we are going to split the dataset into train and test splits to evaluate the model with the unseen data and check its accuracy.

In this step, we are going to construct the input we need to feed into a network. For simplicity and for the model’s sake we are going to stack the two features of the data into x and the target variable as y. We use numpy.column_stack() to stack the

Now we are going to build a simple neural network to classify the color of the point with two input nodes and a hidden layer and an output layer with relu and sigmoid activation functions, and sparse categorical cross-entropy loss function and this is going to be a fully connected feed-forward network.

If we evaluate the model with unseen data it will give a very low amount of accuracy,

Now we are going to improve the model with a few extra hidden layers and a better activation function ‘softmax’ in the output layer and built a better neural network.

Finally, if we evaluate the model we can clearly see that the accuracy of the model on unseen data has been improved from 66 -> 85. So we built an efficient model.